The question that every gold investor should be asking is, “Should I sell because the gold bubble is popping or should I buy more as a safe haven against a euro-based market crash?”

Concerns that gold is acting like a risk asset don’t come close the describing how serious this is for gold valuations. It’s the failure of "flight to safety/safe-haven" purchasing to support gold prices during the self-destruction of the euro that puts a dagger in the heart of conventional gold valuation.

A safe haven is an asset that is uncorrelated or negatively correlated with another asset or portfolio in times of market stress or turmoil. Research shows that gold is a safe haven against stock shocks (but not bonds) provided you own it before the shock – buy 1 day late and you lose money.

Normally, the euro-mess would result in recommendations to purchase more gold but concerns started earlier this year that gold was so highly valued that it would start to act as a risk asset. Between September 20 and October 3 gold appears to have transitioned from a hedge/safe-haven to a risk asset that follows the market as shown in the chart below. 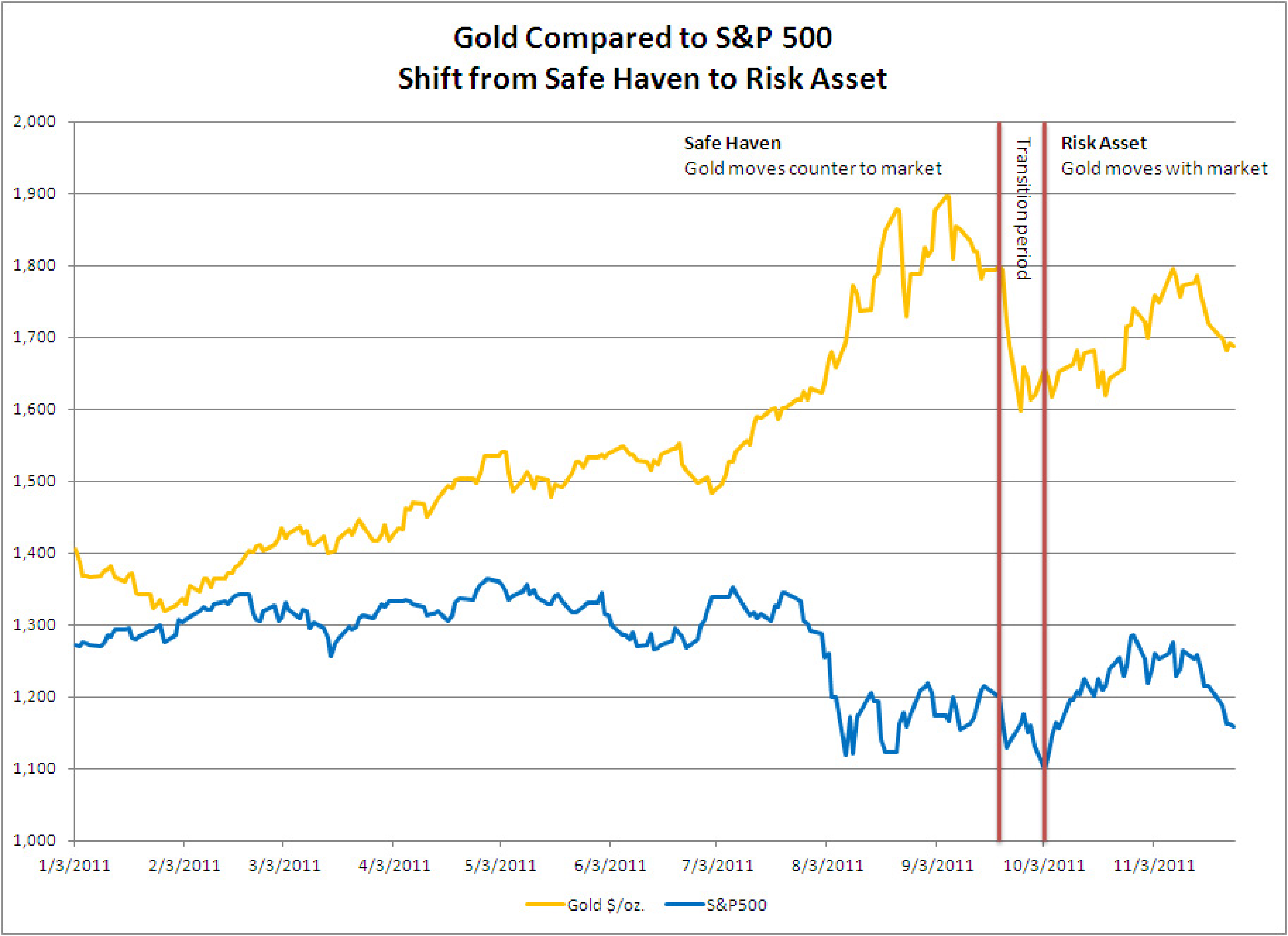 When gold prices were first pushed down in September the excuse was that hedge funds were puking up everything, including gold. Now, you have discussions about countries using gold as a guarantee on bonds – this is the equivalent of countries puking up gold and will be negative for gold in dollar terms. Europe has gold worth $620 billion at current prices – 3 times the $191 billion bought in the last 12 months. The linked article talks about discounting gold to $1000/oz. on Italian bonds-Ouch, that’s an eye opener, even if it represents an end-of-the-world projection.

Adding the lack of safe-haven purchasing to the belief by Indian consumers (the biggest gold market) that gold is overvalued indicates that the gold bubble may be in the process of popping. Indians traditionally shy away from gold when the price is extremely volatile so perhaps this is just a hiccup. The apparent disconnect of gold from “financial stress” (the trigger for “flight to safely” purchases) cannot be called a hiccup - If there is no safe-haven mechanism that will drive gold higher then the top could be in and prudent investors should reduce gold holdings. We’ll go over the reasons for gold to go higher or lower below but first the 3rd quarter wrap-up:

The World Gold Council report for the 3rd quarter 2011 continues to show declining basic demand, increasing speculation and increasing supply. Each quarter, we resort the data into the chart below to get a clearer picture of physical supply and demand (New and Net Supply below) and Investment Demand. 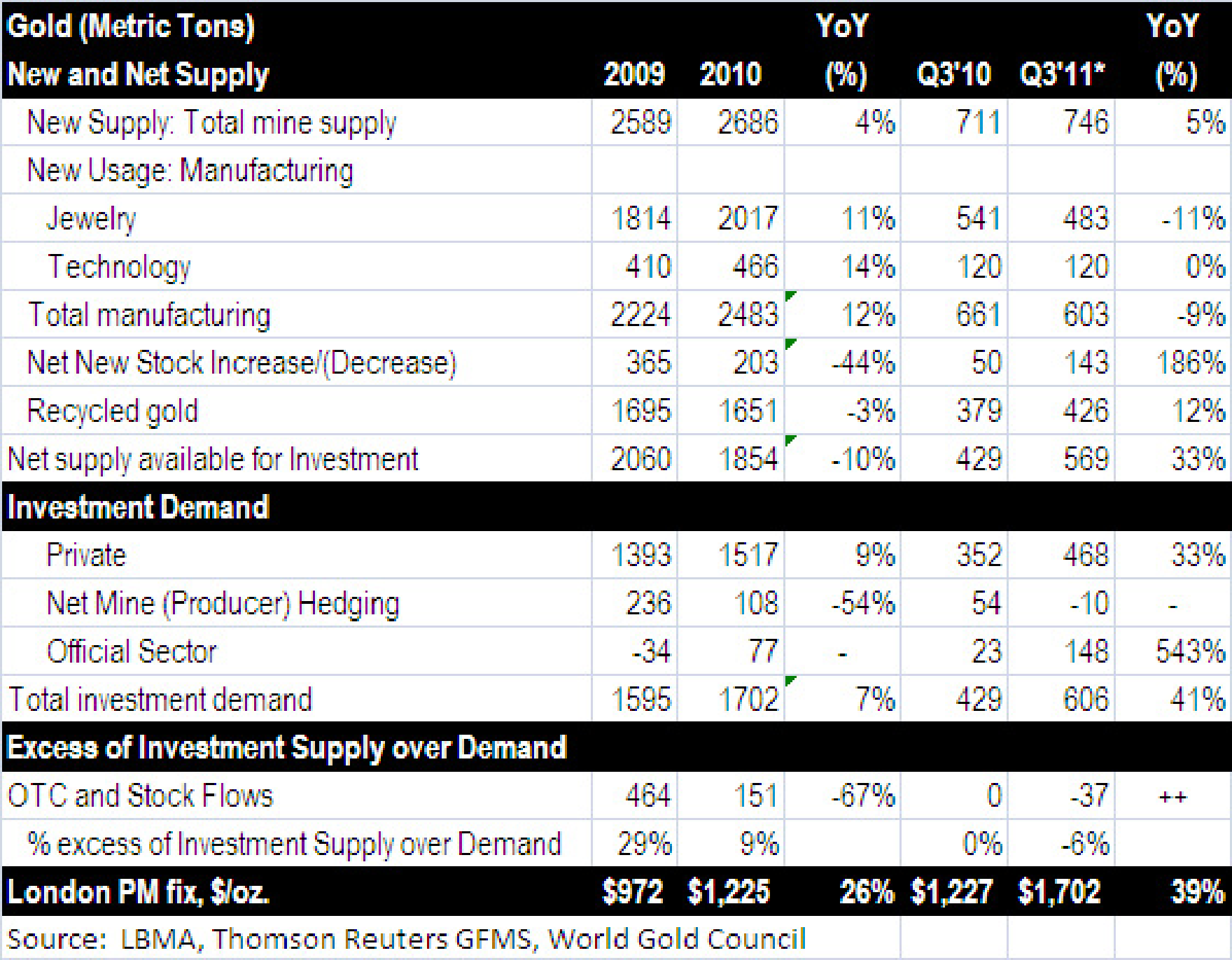 Having a draw on OTC stocks is unusual but does not usually lead to the type of price rise gold had in the 3rd Qtr. The reason for a draw is a negative: Official Sector, AKA Central Bank, purchases. Central Banks outside of the USA have been on the wrong side of almost everything recently (hence the euro-mess) and traditionally sell gold low and buy high. The following chart of world reserves visually demonstrates this. Note that reserves were steadily sold until 2008, 7 years after gold prices started to rise. 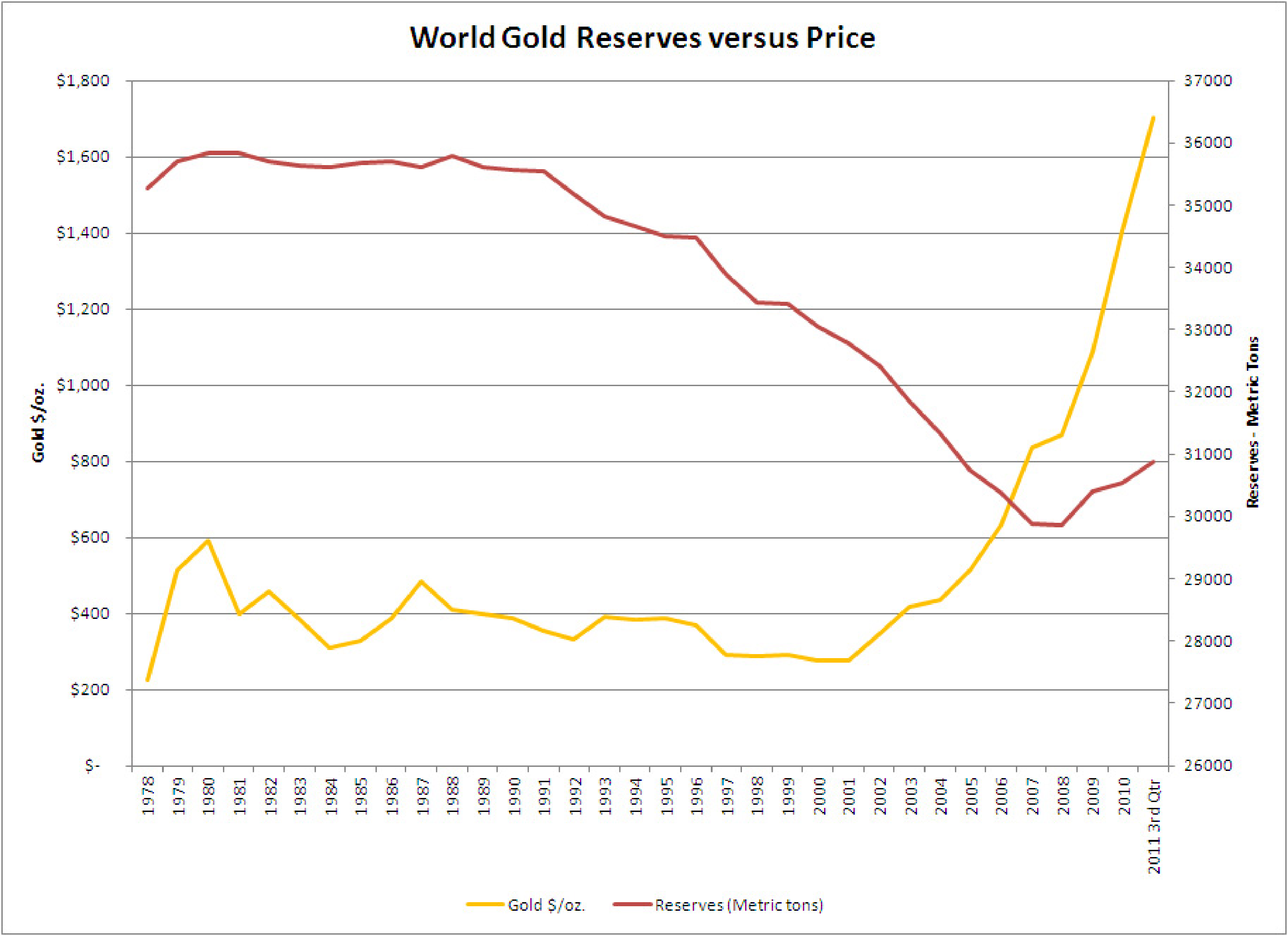 Our Central Bank, the Fed, has usually avoiding doing anything destructive to the US economy. I know, I know – the Fed is destroying the currency by money printing which will show up in inflation any day now and gold will go to $5000. For those of you who still believe that I’ll type slower: We’re in a liquidity trap with short term rates against the zeor boundary so money printing is ineffective at causing inflation in the near term – something else is occurring short term . Accepting this is important because we have to discuss what is causing gold prices to act like risk assets and whether this will continue.

First, as the current risk is specific to euro devaluation, US dollars and bonds may be the only safe haven and gold just adds another level of risk. The chart below shows that while owning gold may eliminate risk of euro devaluation (the gap between dollar and euro pricing) it adds the variability of gold price (the wiggles in the line). 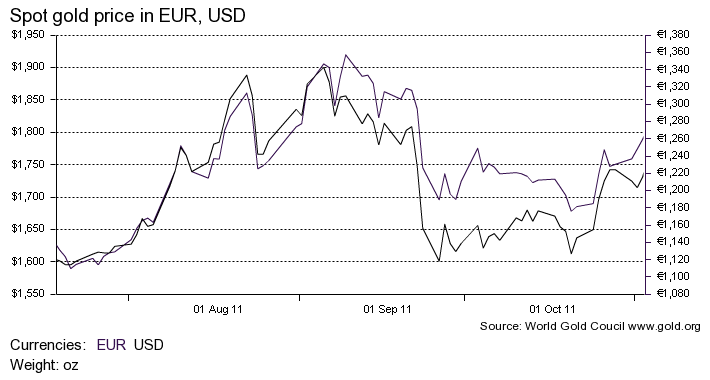 Second, gold may just be overvalued at current levels given the economic outlook. The monetary destruction caused by the euro debt collapse is deflationary. There are reports of a lending crunch in Europe, a sign of deflation which the central banks are trying to counter. According to a study by Oxford Economics for the World Gold Council, gold will underperform both cash and bonds during deflationary periods. Expectations that gold will underperform cash sets gold up as a risk asset as cash is totally risk-free short term.

As a risk asset, the question is whether there is a fundamental reason for the price of gold to go up or down. Mined gold supplies are growing exponentially though not as fast as gold prices as shown in the chart below. 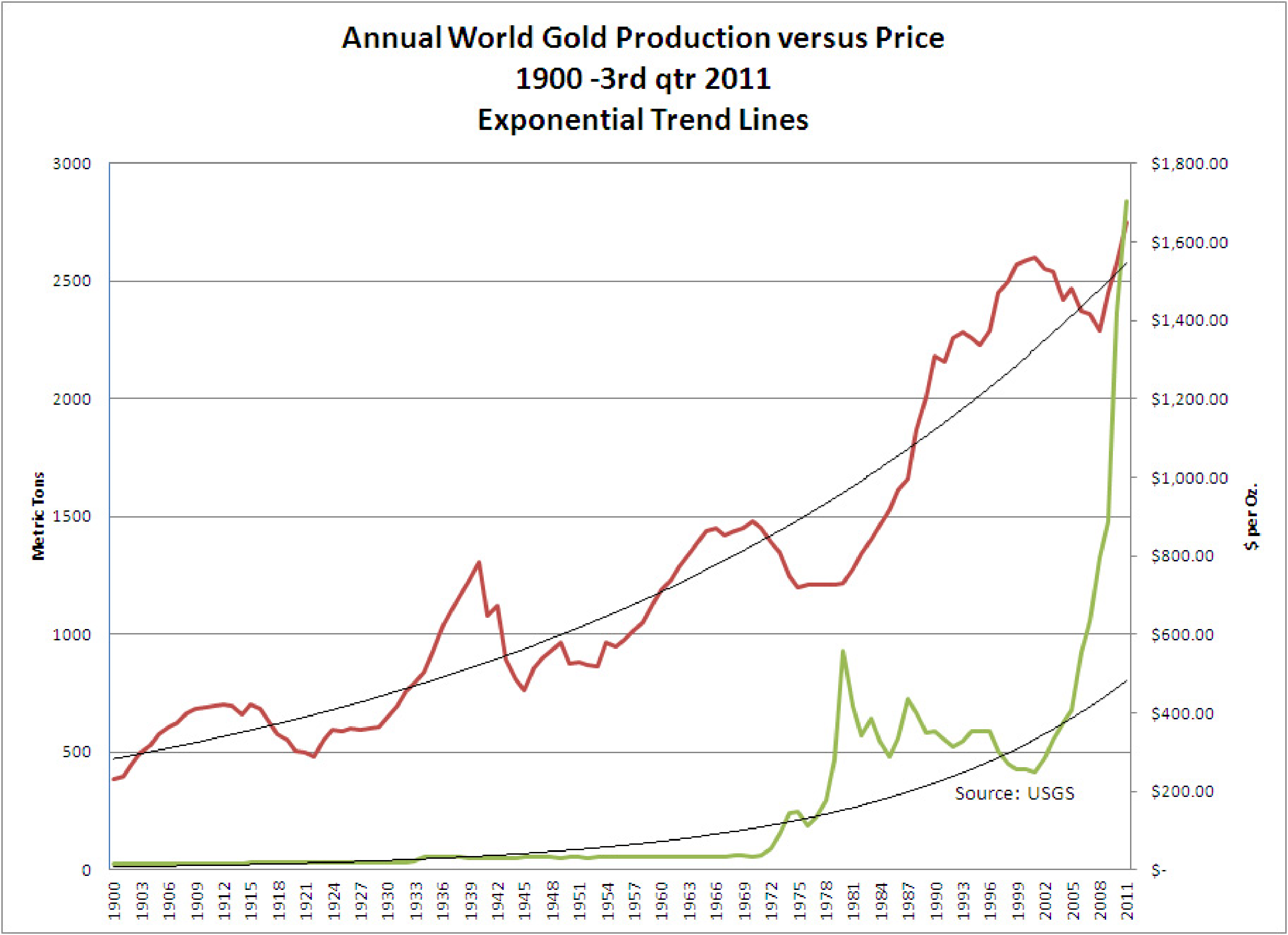 Usage other than investment has been flat or dropping over the last 10 years as shown in the chart below. If investment demand eases there is no reason to believe that the price of gold will go up as new supply is adequate to meet non-investment demand. 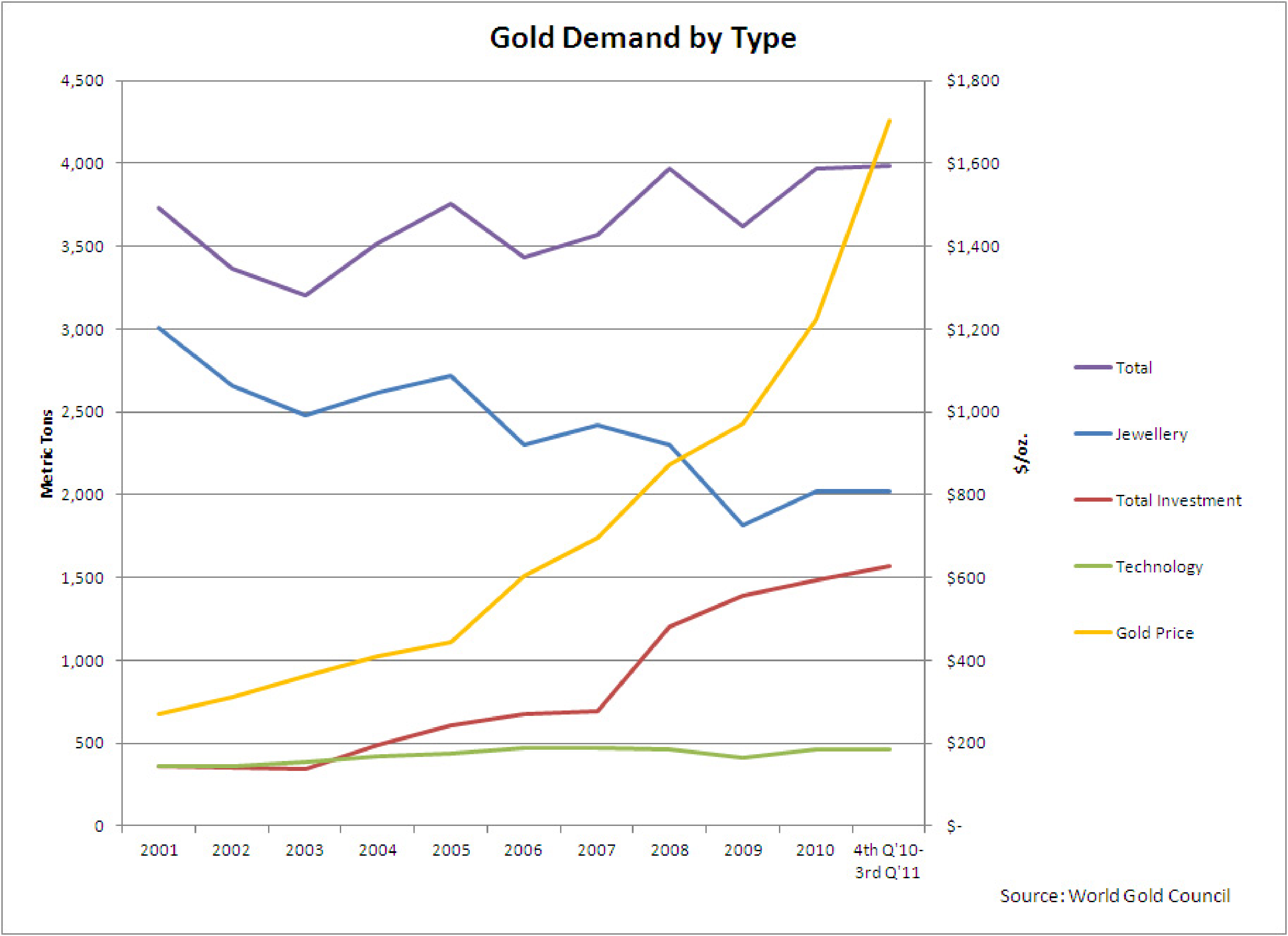 As mentioned in previous posts, since the Lehman Brothers blowup gold prices seem to be responding directly to real interest rates and acting like a long term treasury bond. The chart below shows the rise in gold compared to the drop in real interest rates on inflation protected Treasury bonds (scale is inverted.) 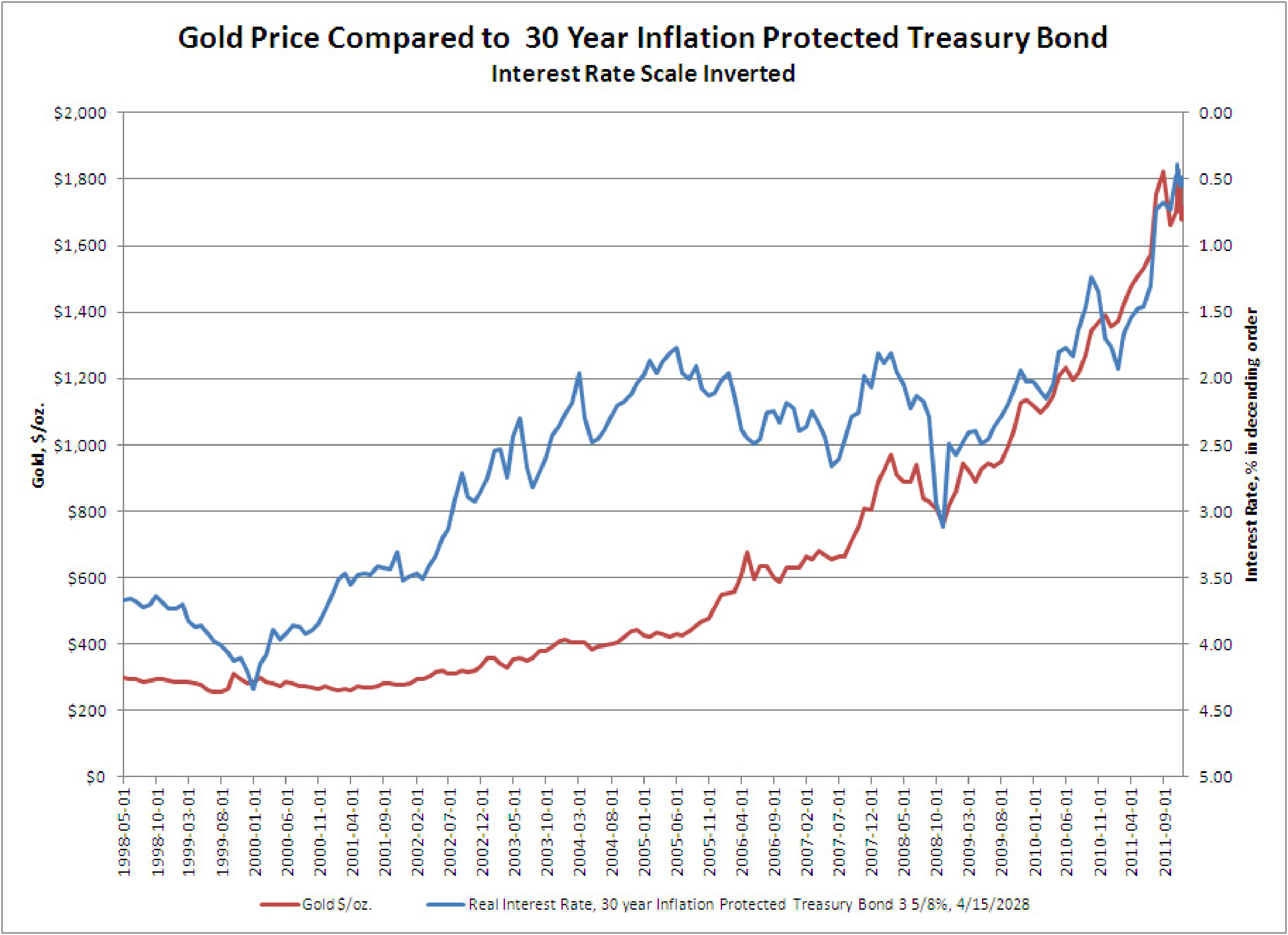 Correlation is not causality but there is theory that supports this relationship. Investment gold prices are theorized to be dependent on the cost of storing gold as long as there is a supporting expectation that gold will go up. The cost of storing gold is depends on the interest rate you have to pay on borrowed money so as interest rates go down, the price of gold goes up. With interest rates at historic lows, further price gains would occur only if real interest rates went negative like in the high inflation 1980, causing the last gold price spike. This is unlikely in a deflationary environment so low interest rates may explain on why gold is now trading like a risk asset rather than more like a bond.

In the Lehman crash interest rates spiked up and a similar event today in US-based interest rates would be negative for investment gold. However, the Fed is committed to maintaining excess liquidity in the system so a US interest-rate spike should be limited but still negative for gold.

Summarizing all of the above, safe-haven gold investing appears to no longer be a factor in the euro specific currency crisis, at least with gold at current levels. In addition, US interest rates would have to go negative for them to drive significant gold appreciation, which is unlikely. This implies that while the gold bubble may not be popping, it is not going to inflate much more until the euro-mess is resolved.

There appears to be no driver to push gold significantly above the $1900/oz. previous peak. Even the just announced major central bank lowering of the overnight cost of emergency funds by 0.5% to European banks will not drive rates below zero.

Buying more gold should wait until gold drops close to the $1500’s where safe-haven behavior is evident. If gold approaches $1900/oz., safe haven investors should sell. Speculators looking for prices equivalent to the 1980s inflation adjusted spike of $2200 to $2400/oz. will have to wait until central banks figure out how to drive real interest rates negative in a deflationary environment.

It may be a long wait for physical gold to reach new highs. Better investment opportunies are in gold stocks where gold at $1600 will result in amazing profit increases.

One Eyed Guide
232 Followers
The One Eyed Guide (http://www.oneeyedguide.com) is Bob Small who: solo traveled to 25 countries by age 21, has a degree in Economics, an MBA from Columbia University in Marketing and Finance, has been a brand manager, was a licensed stock and options broker during the 87 crash, ran a $450 million dollar business and raised $8 million for charity.