Advisor Perspectives' Doug Short recently published an update on margin debt, accompanied by several well-made charts. But it only takes one to make the point.

See below for the relationship between margin debt - money borrowed by retail investors against their stocks and used to buy more stock - where Short has enhanced the visual impact by inverting the margin debt line. As presented here, a downward sloping red line means margin debt is increasing. So when the two lines diverge, that means stock prices and margin debt are both rising.

The gap between them is thus a measure of the divergence between investor expectations and market reality. Note two things: 1) when the gap grows too large, the lines tend to converge via falling stock prices and shrinking margin debt (usually through involuntary liquidation of leveraged stock portfolios). And 2) today the gap is wider than it's ever been. If history is a valid guide, the two lines will shortly cross somewhere around 1,000 on the S&P, or about 50% lower than current levels. 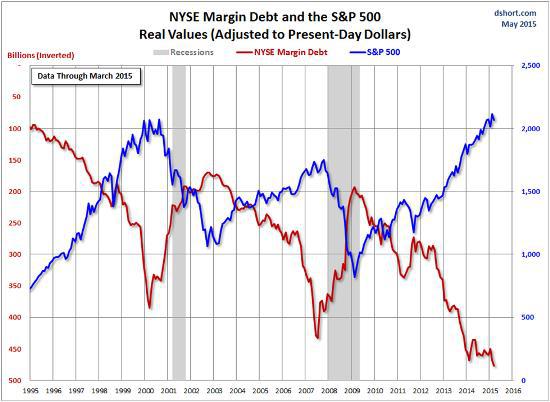 John Rubino
2.73K Followers
John Rubino manages the financial website DollarCollapse.com. He is the co-author, with GoldMoney’s James Turk, of The Money Bubble (DollarCollapse Press, 2014) and The Collapse of the Dollar and How to Profit From It (Doubleday, 2007), and author of Clean Money: Picking Winners in the Green-Tech Boom (Wiley, 2008), How to Profit from the Coming Real Estate Bust (Rodale, 2003) and Main Street, Not Wall Street (Morrow, 1998). After earning a Finance MBA from New York University, he spent the 1980s on Wall Street, as a money market trader, equity analyst and junk bond analyst. During the 1990s he was a featured columnist with TheStreet.com and a frequent contributor to Individual Investor, Online Investor, and Consumers Digest, among many other publications. He currently writes for CFA Magazine.
Follow
39 Comments