Regional lender BB&T (BBT) is one of a number of financials that has traded sideways for a long time. In BBT's case, it has been more than a year that the stock has barely budged. Financials in general have been waiting for higher rates, and since the move higher hasn't come yet, many stocks like BBT have taken very prolonged pauses in their respective rallies. I have been a fan of this company for a long time, and admire its old-fashioned approach to banking, stability and ample dividend. But shareholders would be pardoned for losing patience with the bank, as the stock hasn't moved for nearly 18 months. In this article, I'll take a look at BBT's current valuation to see if there is some potential upside. 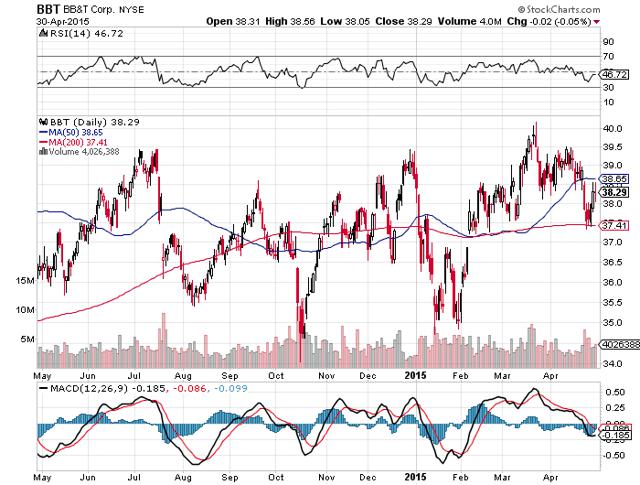 To do this, I'll use a DCF-type model you can read more about here. The model uses several inputs including earnings estimates, which I've borrowed from Yahoo, dividends which I've estimated to grow at 12% annually, and a discount rate which I've set at the 10-year Treasury rate plus a risk premium of 6.5%.

The model's fair value estimate of $43 is significantly higher than the $38 the shares currently trade for as I write this. Let's take a look at the fundamentals and see if that fair value is reasonable or not.

I mentioned rates in the open, and that is certainly the topic du jour for financials; we've been waiting and waiting followed by waiting some more for higher rates, and we still don't have them. I'll admit that I've been bullish on the banks for too long, due to the thought that higher rates were coming sooner than they have. That has made bank stocks a rough place to be for the past year or so, and BBT is certainly caught up in that. Like virtually any other financial that is focused on lending, low rates are a significant impediment to profitability. In my view, rates are the biggest reason why the shares haven't moved for nearly a year and a half.

Still, there is more to this story, so let's take a look at the company's recent earnings report to kick things off. Net income was flat, a story we've heard from many financials during the Q1 earnings season, as the environment for lending has been anything but favorable. But given how challenging conditions are for banks at present, flat earnings are really not an undesirable result.

BBT saw declining net interest margin - down 19 bps to 3.33% - and that sent net interest income down marginally on the quarter. Nobody likes NIM to fall, but BBT's number of 3.33% is actually decent among large banks. The average is below 3%, so a portfolio with that kind of NIM is actually quite robust. Imagine what will happen when rates aren't at the zero lower bound for years at a time. The bank has done a nice job of wringing every bit of interest it can from its portfolio, and has done so prudently, minimizing credit losses along the way.

In another theme we've seen from banks, BBT posted a nice increase in fee income, which helped drive the top line higher off of the NII miss. Fee income has been a lifesaver for banks in recent years, as NII has slowly dwindled, and BBT took full advantage in Q1, pulling in nearly a billion dollars in noninterest income - that high-margin income helped bolster profits in an otherwise tough quarter.

I think BBT will be alright in the long run, because the company's history with its current management team is pretty terrific. It has always taken a low-risk approach to bringing in deposits and lending them out profitably, and that isn't going to change. BBT continues to follow its playbook of expanding via acquisition, while continuing to focus on profitable growth in existing markets. I mentioned that the bank's NIM is higher than many of its competitors, and I'd expect that will continue as rates rise. When that will be is anyone's guess at this point, but BBT is well positioned to take advantage when it does happen.

In addition to that BBT is a very nice income stock. The dividend was hacked to pieces during the crisis as management scrambled for cash amid crashing earnings, but a recovery in the payout is in progress. The stock is yielding 2.8% with its current $1.08 payout, and I think there is a lot of room to continue to raise the payout going forward as EPS growth resumes. BBT is paying out less than 40% of its earnings right now in dividends - about half the rate it paid before the financial crisis - and while I think 80% of earnings is too much, the company has lots of room to take the payout higher. This is the main draw for investors looking at BBT right now, in my view, because it looks like a continuation of the sideways action of the last year and a half is on deck.

Needless to say, I don't think the Compass Point downgrade makes a lot of sense. I don't get combining "lagging loan growth" with "uncertainty over new markets" as a reason for a downgrade. The new markets should lead to loan growth (one would hope), or management likely would have selected a different market to charge into. The other reason cited for the downgrade was NIM pressure, but with rates beginning to move a bit higher in the last couple of weeks, perhaps downward pressure on NIM is finally abating.

I still like BBT but for now, it's mainly for the dividend. There is lots of room to raise the payout while you wait for higher rates. I think BBT is well positioned for higher rates, but you've got to be patient and collect that 2.8% yield in the process.

Josh Arnold
21.8K Followers
Author of Timely Trader
Maximize your gains through live trading with alerts ahead of market trends