It has been a common refrain from nervous investors since the initial outbreak of the financial crisis back in 2008.

“Are we on the brink of another Lehman moment?”

The translation of this question is readily apparent given that the Lehman failure is still so fresh in our memories. Will we soon see the collapse of a systemically important banking institution that will lead to another financial market contagion and sudden stock market collapse? Given the persistent risks in Europe, this is a critically important question to consider. But in contemplating this possibility, it is worthwhile to take this thought process one step further.

“Are we on the brink of another Credit-Anstalt moment?”

The translation of this question is less obvious. First, what exactly is Credit-Anstalt? Founded in the 1850s, it was an Austrian bank that was a systemically important financial institution as one of the largest banks in Europe. But by the 1920s, the bank was facing mounting stress due to expanding competition and increasingly aggressive lending activity. Staggered by the hyperinflation episode of the early 1920s, Credit-Anstalt soldiered on but was compelled by regulators to absorb other failing banks along the way in order to support the financial system. But by the early 1930s, the bank began collapsing under its own weight with loan losses mounting and depositors taking flight. And on May 11, 1931, Credit-Anstalt relented and declared bankruptcy. Much like Lehman in 2008, the collapse of Credit-Anstalt was considered a bellwether event that helped lead to the contagion of bank failures that would ultimately characterize the Great Depression. 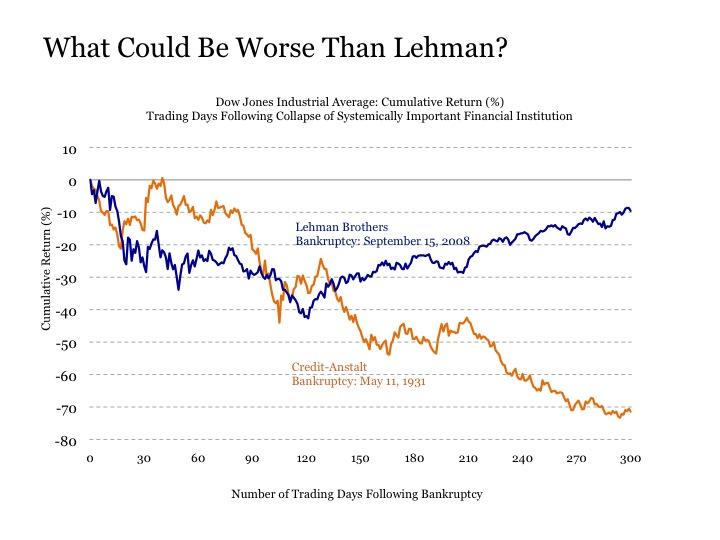 The above chart details the performance of the Dow Jones Industrial Average following the bankruptcy of Credit-Anstalt in 1931 and Lehman Brothers in 2008. Three facts are immediately notable.

First, the stock market response to the collapse of a systemically important financial institution is severe and long lasting.

Third, while the market followed very similar paths for the first several months following the collapse of both financial institutions, the paths suddenly diverged after about 130 trading days.

So what were the key differences that led to this eventual split between the Credit-Anstalt and Lehman stock market paths? The primary factors are listed below.

Capacity to Address the Problem

When Lehman Brothers failed in 2008, the U.S. government had the capacity to address the problem that quickly spread through the financial system. In other words, the sheer size of U.S. economy and its monetary policy mechanisms enabled it to fully backstop and, if necessary, completely absorb the problem in its financial system. This was not the case with Credit-Anstalt. While the Austrian government tried to step in and backstop Credit-Anstalt, it was simply too big for the Austrian economy to absorb. The result was the eventual spread of the crisis to countries around the world. Not only is this the problem facing many European sovereigns today, but it is actually the sovereigns themselves that are at the core of the bad loan issues crippling the banks across the region.

Resolve to Address the Problem

When Lehman Brothers failed in 2008, it took only a few weeks for policy makers to recognize the gravity of the problem. And by October 2008, the resolve to fix the problem was unequivocal that no additional systematically important institutions would be allowed to fail. And it took financial markets another six months before finally bottoming in March 2009 even with these continued reassurances. The same resolve was not shared by policy makers back in 1931. Instead, global leaders dithered with largely disjointed policy responses and struggled to find consensus on potential solutions for months after the fact as the panic increasingly enveloped financial markets. Such is the troubling atmosphere in Europe today, as policy makers are continuing to lose precious time as they struggle to find consensus not only on major solutions but even the minor details.

Hamstrung By A Common Currency Standard

The U.S. banking system was at the core of the crisis when Lehman Brothers failed in 2008. And U.S. policy makers had the benefit of the double-barreled arsenal of aggressive fiscal AND monetary policy to combat the problem. But back in 1931 when Credit-Anstalt failed, the global economy still operated under the gold standard. This greatly constrained the ability to respond with accommodative policy support at the time. Instead, global leaders were forced to act with more restrictive policy actions such as increasing interest rates aggressively in order to curtail gold outflows.

Such is the problem today with the common Euro currency. While sovereigns with their own independent currencies would have been able to respond with monetary easing and currency devaluations to help relieve the pressure in the system, instead they have been hamstrung by centralized monetary policy that has been insistent on maintaining relatively high interest rates and a stubbornly strong currency. Moreover, without the benefit of monetary policy flexibility, they are instead forced to engage in fiscal austerity that will only serve to constrain growth even further and compound current problems.

Thus, the risks associated with the European sovereign debt crisis are more profound than even the Lehman episode. While policy makers had the capacity, resolve and flexibility to intervene aggressively to stem the market tide, these same levers may not be readily available if we see another systemic bank failure occur in Europe. And without these capabilities, we face the threat of another Credit-Anstalt moment. European policy makers collectively still have the time and ability to effectively address the problems that plague their region to help prevent such an outcome. But time is running out and the size of the problem is quickly growing out of their reach.

It is often said that European leaders fear a repeat of the Weimar style hyperinflation of the 1920s. And given the disastrous fallout from this episode, this sentiment is completely understandable and should be respected. However, it is worthwhile that they also be mindful of a repeat of a Credit-Anstalt style default. For months after the Credit-Anstalt failure, policy makers believed that the problem could eventually be contained. But in the end, it could not. And the resulting chaos that ensued for the global financial system was vastly more traumatic than what ensued in the aftermath of Lehman.

Hopefully, Credit-Anstalt holds a comparable weighting along with Weimar in the minds of European policy makers as we move into the New Year. Otherwise, the potential fallout could demote Lehman in the history books to a mere preamble to a vastly more dramatic outcome that came only a few years later.

This post is for information purposes only. There are risks involved with investing including loss of principal. Gerring Wealth Management (GWM) makes no explicit or implicit guarantee with respect to performance or the outcome of any investment or projections made by GWM. There is no guarantee that the goals of the strategies discussed by GWM will be met.