I have been waiting for more than five years to offer this advice. It is now time in most cities across the country to buy a new home or refinance your existing home with thirty-year fixed rate mortgage debt. And this from the author of The Coming Crash in the Housing Market published in 2003 and my 2006 book, Sell Now! The End of the Housing Bubble. Let me explain why.

Home prices are off anywhere from 10% to more than 60% in cities across the country. There is no reason to believe that prices were "fair" during the bubble as we have seen they were largely caused by loose and aggressive lending by banks and non-banks. But, it is always better to buy at a discount rather than at a historical peak, and these seem like awfully big discounts. And by my calculations, in most cities across the country, real prices adjusted for inflation have just about come into line with where prices were in 1997, before all this crazy bank lending started, so there should be little additional downside risk by buying today. There are still some neighborhoods across the country that have not seen very dramatic declines in price, many of them very wealthy and expensive enclaves, but given the distribution of incomes lately heavily weighed toward the wealthy, these areas may never see a really large home price decline.

Homes in many cities across the country are now selling for as little as $60 to $70 a square foot. Depending on the quality of construction and the underlying land value, this represents a 50% to 65% discount to the costs you would incur if you tried to build a similar home today in these cities. While there is no guarantee that there will be a strong rental market in the short run, in the long run it just seems to make sense to buy if you can acquire assets at half or less of the cost of building them.

During the peak years of the housing bubble, entire cities like San Diego were seeing their homes priced on average at 11 times the area's median family income. Such prices financed primarily with debt are by definition unsustainable. Now, because banks have pulled back on their lending formulas, homes in many cities are changing hands at three to four times average family incomes. Similarly, at the peak, houses traded at such large multiples of possible rents that it made the projects uneconomic from the start. Now, with homes trading at more reasonable multiples of rents, houses and condos can be purchased that are immediately cash flow positive in year one and enjoy all the upside of any appreciation that will occur as inflation returns.

We still talk about home prices in dollar terms, which is silly because the dollar has lost 98% of its purchasing power relative to a more stable asset like gold over the last fifty years. If instead of pricing houses in dollars, we look and see what a home would cost in ounces of gold, we see that houses today are a real bargain. As a matter of fact, this graph shows that average homes, measured in the number of gold ounces it would take to buy them, are now trading at forty year historical lows. 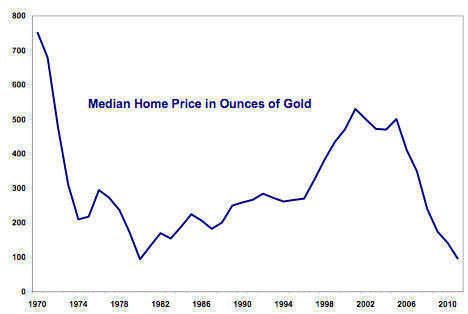 You might argue that this is because gold is priced highly today. I would argue that gold's purchasing power has changed very little over time, it is the dollar that is depreciating and thus giving the appearance that the price of gold is rising. Actually, gold is quite stable relative to other assets and commodities and it is the dollar that is highly volatile and declining in value due to the US funding its deficits by printing dollars.

The Real Bubble - US Treasuries and Future Inflation

The real bubble out there is longer US Treasuries and 30-year fixed rate mortgages for home-buyers. With US debt equal to its GDP and equal to more than four times our government's total tax revenues and with annual deficits of $1.3 trillion and growing, it is amazing to me that people will lend to the US for thirty years for less than 3.0% a year. Even more amazing is that individual homeowners can borrow at 4.0% (around 3% after tax) for thirty years on a fixed rate basis, some 300 basis points better than Italy which has a lot more people and makes much better shoes.

Homes may not appreciate greatly in real terms over the next twenty years, but they don't have to if inflation comes back, which is the only way the US and Europe are going to get out from under the huge debts on their countries and their banks. You may not make a lot in real terms on the house, but if inflation returns, you could make a killing on your investment as your thirty year debt becomes worth less and less in real terms. Run the numbers, but if inflation and interest rates go back to say, 7% to 8%, you could easily make eight to ten times your equity investment on the house because you locked in your borrowing costs and home appreciations historically have always correlated well with unanticipated inflation.

So, run, do not walk to your neighborhood banker and either finance a new home purchase or take out the maximum amount of money he or she will lend you on a home equity loan and buy hard assets, not financial securities, with the money. When inflation comes roaring back the only perfect hedge is to be a borrower, not a lender or investor. Shakespeare said, "Neither a borrower nor a lender be," but they didn't have huge government deficits and the risk of future inflation back in the Bard's time.