Commodity prices began a secular bull market sometime around 2003. The prices of raw material rose to heights never before witnessed. Commodities became a mainstream investment vehicle for a number of reasons. Most importantly, the vast majority of investors love a bull market. As prices rallied, more investment dollars poured into commodity-related investment assets. The advent of a new crop of investment vehicles, ETF and ETN products, allowed investors to steer funds to commodities without the volatility and margining requirements of traditional commodity-related products like futures and physical investments in the sector. Low interest rates and a falling dollar (which is the global pricing mechanism for commodities) were supportive of higher values.

Commodity prices rose, as a sector, until the global financial crisis of 2008. In the wake of the meltdown, they briefly plunged, only to reassert the powerful rally that took many staple prices to new highs until 2011, when - like in a game of musical chairs - the music suddenly ended.

The bear market started in 2011

In 2011, many commodities made all-time highs. Copper traded to just under $4.65 per pound, gold peaked at $1920 per ounce, silver almost made it to $50 per ounce, and sugar traded 36 cents per pound. Since these highs, almost every commodity has suffered a huge correction - copper now trades at the $2.90 level, gold is under $1200, silver is below $16.50, and sugar is at 13.5 cents. Prices overall have been making lower highs and lower lows over the past four years, in what is a cyclical bear market in raw material prices. While there are certainly some exceptions - the one that comes to mind is the price of cattle - those exceptions have little to do with the overall performance of the asset class. Rather, individual supply and demand forces, or exogenous factors that are truly specific to individual commodity products have bolstered prices when it comes to these exceptions. The bottom line is that the secular bull market in commodities gave way to not only a correction, but also an overall bear market in the asset class as a whole.

While most traders, investors and analysts have a very short memory, the fact is that even though prices are far below 2011 levels today, they are still high on a historical basis.

Prices are still high from a historical perspective

Commodities and the dollar and interest rates

Since the dollar is the world's reserve currency, it is the global pricing mechanism for most commodities. The quarterly chart for the U.S. dollar index highlights the inverse relationship between the U.S. currency and commodity prices. 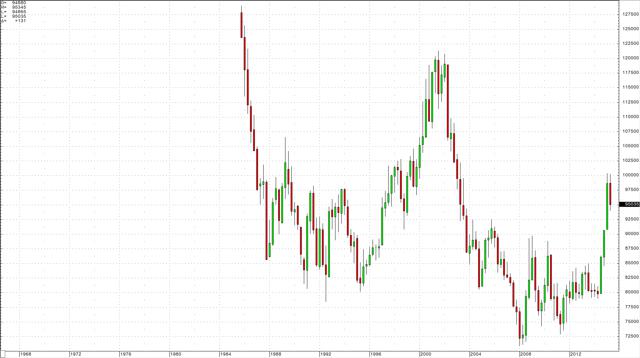 In late 2001, the U.S. dollar commenced a seven-year slide that took the index from highs of 121.29 to lows of 70.805 - the depreciation of the dollar corresponded to the first leg of the commodity bull market. In the wake of the global financial crisis in 2008, the dollar rallied and commodity prices fell, only to rebound as the dollar moved lower, and began a five-year period of consolidation in 2009. The inverse relationship between the dollar and commodity prices has been almost perfect from a sector perspective. The recent rally in the dollar that commenced in May 2014 resulted in lower commodity values. At the same time, a long period of lower interest rates has bolstered commodity prices, as the cost of carrying raw material inventories has been very low.

The prospect of higher interest rates in the future - they cannot go much lower - coupled with a strong dollar these days is not a positive for commodity prices over the medium term. However, commodity prices are cyclical, and when the next bull market begins, certain changes in the physical commodity markets may take prices to heights never seen.

One of the outcomes of the 2008 financial crisis was an increase in regulation in the United States and the United Kingdom, the traditional hubs for commodity trading. The Dodd-Frank Wall Street Reform and Consumer Protection Act of 2010 increased the powers of regulators like the Commodity Futures Trading Commission. Additionally, U.S. and European banks that entered into the physical commodity business during the great bull market that began in 2003 became subjects of increased scrutiny, as these financial institutions not only aggressively traded commodities, but made investments in commodity infrastructure. The scrutiny and increased compliance costs related to Dodd-Frank caused the banks to abandon their roles in the commodity business, and over the past few years, they have divested from trading and investment in the raw materials sector.

A new group of commodity kings bought up the assets of the banks, and now stand ready to influence raw material prices in the years to come. The vast majority of these physical commodity-trading firms operate offshore. Their headquarters are in Switzerland and Asia, far from the clutches of U.S. regulators. Some of these commodity houses have bought up not only infrastructure, but also production assets in the commodity sector. Companies like Glencore (OTCPK:GLCNF), the predecessor company of Marc Rich, are growing rapidly and are becoming major producers of commodities like iron ore and nonferrous metals, as well as other raw materials. These physical commodity-trading entities can control production in many markets, and during the current bear market, they have the ability to build market share as high-cost producers go out of business during the current bear market. These commodity powerhouses have lots of cash, and stand ready to control markets when prices move higher. The U.S. is a huge consumer of commodities. Production of many commodities happens outside U.S. borders. It is probable that the unintended consequences of legislation like Dodd-Frank will cause U.S. consumers to pay higher prices for staple goods in the future and the agencies in charge of protecting consumers will have little ability to do anything about it.

China is a huge variable

China is currently a huge variable when it comes to the future path of commodity prices. The Chinese government, through its policy of a "new normal," is attempting to stabilize growth and make it sustainable at around the 7% level. To this end, China has already cut domestic interest rates three times this year, the latest cut coming on Monday, May 11. Structural issues in China are responsible for lower growth. Reliance on infrastructure building has increased the amount of municipal debt. While the Chinese government is cutting interest rates, the amount of bad debt in the country is likely to cause failures over the coming months. China is the demand side of the equation in commodities these days because of the nation's population size and growth rate. As the country has been facing issues in terms of a slowdown, commodity prices have suffered. Iron ore prices, which have recovered marginally recently, are still at very low levels, which is a direct result of China's economic lethargy.

The next rally in commodities will commence when China begins consuming and stockpiling raw materials once again. With a population of 1.3 billion (18% of the global population), the country will continue to be the most significant factor when it comes to commodity demand.

My outlook for the commodities sector is bearish for the medium term. China's economic lethargy will continue to weigh on commodity prices. The prospect for higher interest rates in the U.S. will increase the cost of carry for raw materials. Perhaps most importantly, commodity prices are just not that low today. On a historical basis, many commodity prices remain well above the levels they traded at on January 1, 2000, and some are still above the highs established prior to 2003. I believe that there is still a lot of downside room in raw material markets. Only when they fall below production cost will a decrease in output for economic reasons create the shortages or deficits in markets necessary to propel them higher. In the meantime, one must continue to analyze each commodity on a case-by-case basis. Each commodity has independent fundamentals. For example, those commodities that are sensitive to weather, like agricultural products, may buck the trend of lower prices, given the right set of exogenous events. Unexpected geopolitical factors can also cause increased volatility at times.

On a long-term basis, I am very bullish on the prices of raw materials. Global population growth will increase the demand for finite raw materials as more people compete for limited staples. Finally, predatory strategies by commodity-trading companies that are domiciled outside the regulatory umbrella of U.S. regulators will cause prices to explode in the years ahead when deficits develop in these markets. The new commodity kings are using the current environment as an opportunity to build market share and control commodity production in the years to come. Therefore, for the next few years, we will likely see prices move much lower than current levels, because current prices are just not that cheap. Lower prices will eventually give way to the next secular bull market in commodities that will likely take prices to dizzying heights.