The S&P 500 (SPY) is a somewhat capricious index created by a committee on the fly. Yet the S&P 500 is probably one of the greatest trading systems ever created. It beats most every mutual fund out there. It is tracked and bench marked against trillions of dollars in assets. So let's take a look at the long picture.

The end of year brings out the projections for the next year. As a fundamentals guy and recovering quant with a bent for history I submit the following S&P 500 perspective 1871-2011 with Shiller's data.

I don’t predict stock markets as I believe there are enough traders and other smart folks pulling information (signal) out of the index (noise) creating more entropy for the rest of us.

So here is the long-term data series. 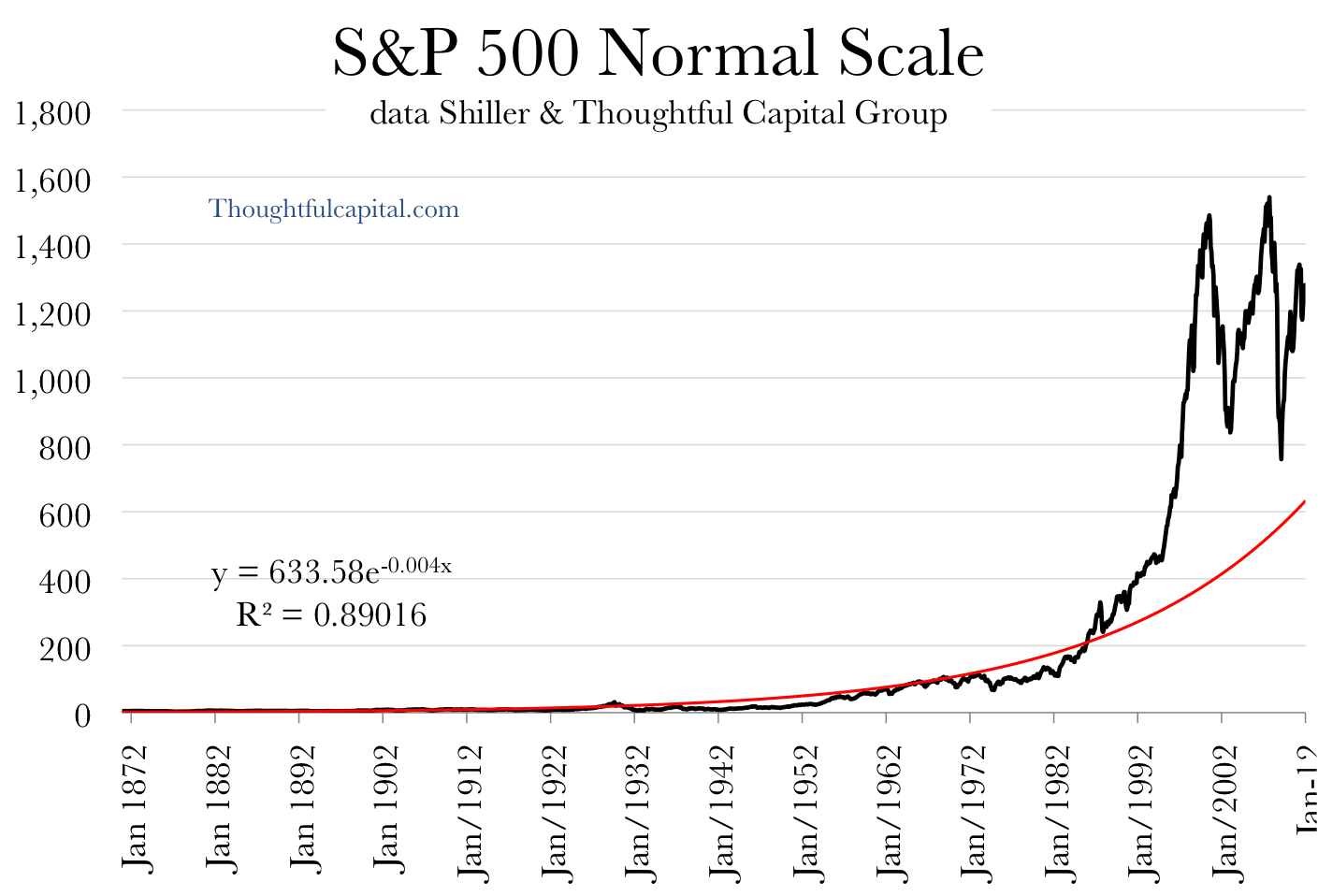 Below is the series plotted on a semi-log chart. The S&P is an exponentially growing thing and most of us experience it from year to year. How data are presented significantly alters perceptions. The normal scale accentuates volatility, while the semi-log scale more accurately shows the long-term growth. 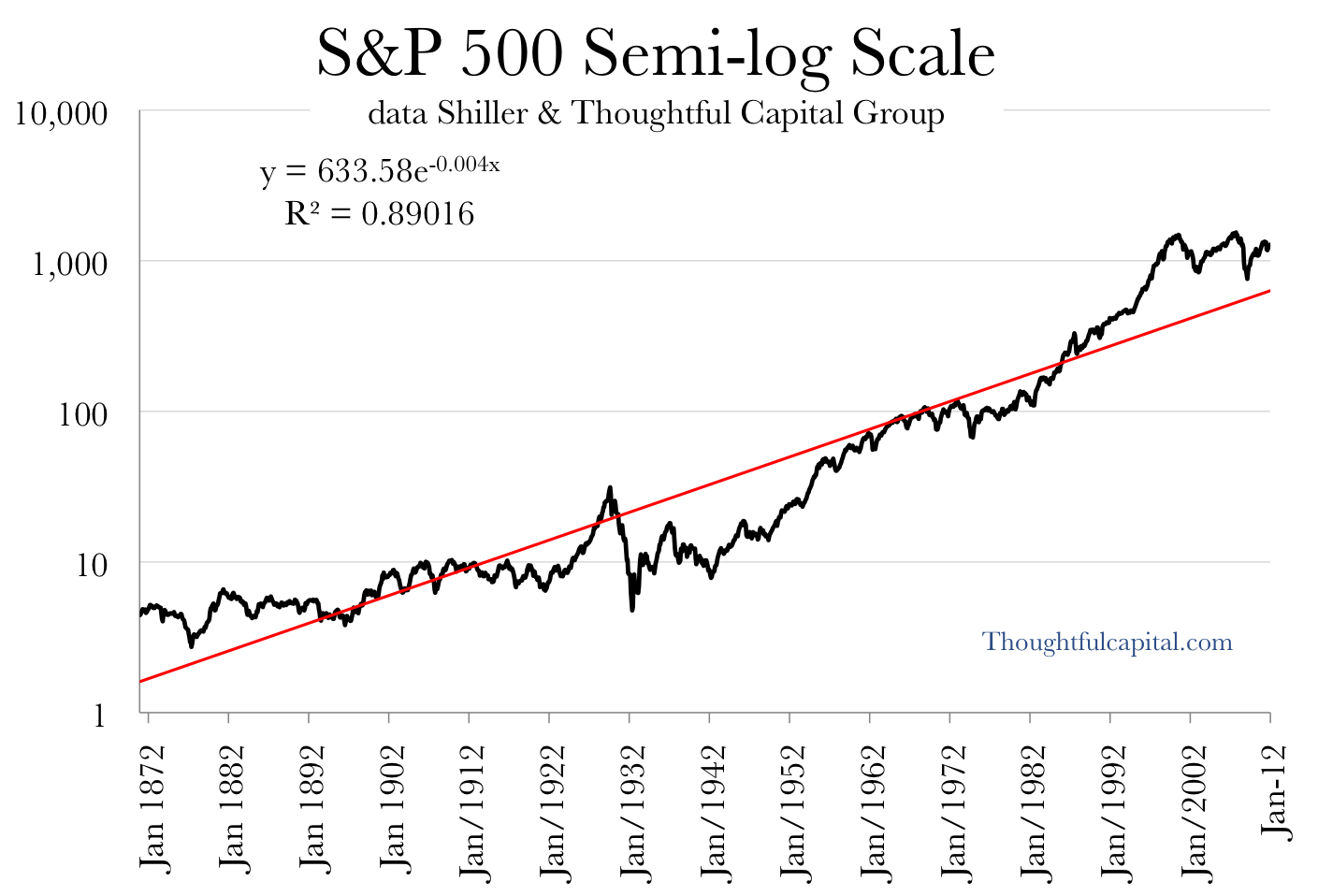 You will notice that the long-term growth trend appears fairly stable with the exponential curve having an R^2 of 0.89

Most investors, managers and regular people think about the market in 1-year intervals. This is an arbitrary unit of time that has nothing to do with economics, it is an anthropic artifact, but the truth is we perceive the recent past as significantly more important than the far past. So here is a chart of the1-year rolling returns for the S&P 500. It helps to show how and why people consistently under perform the index, buying highs and selling in panics at the lows. 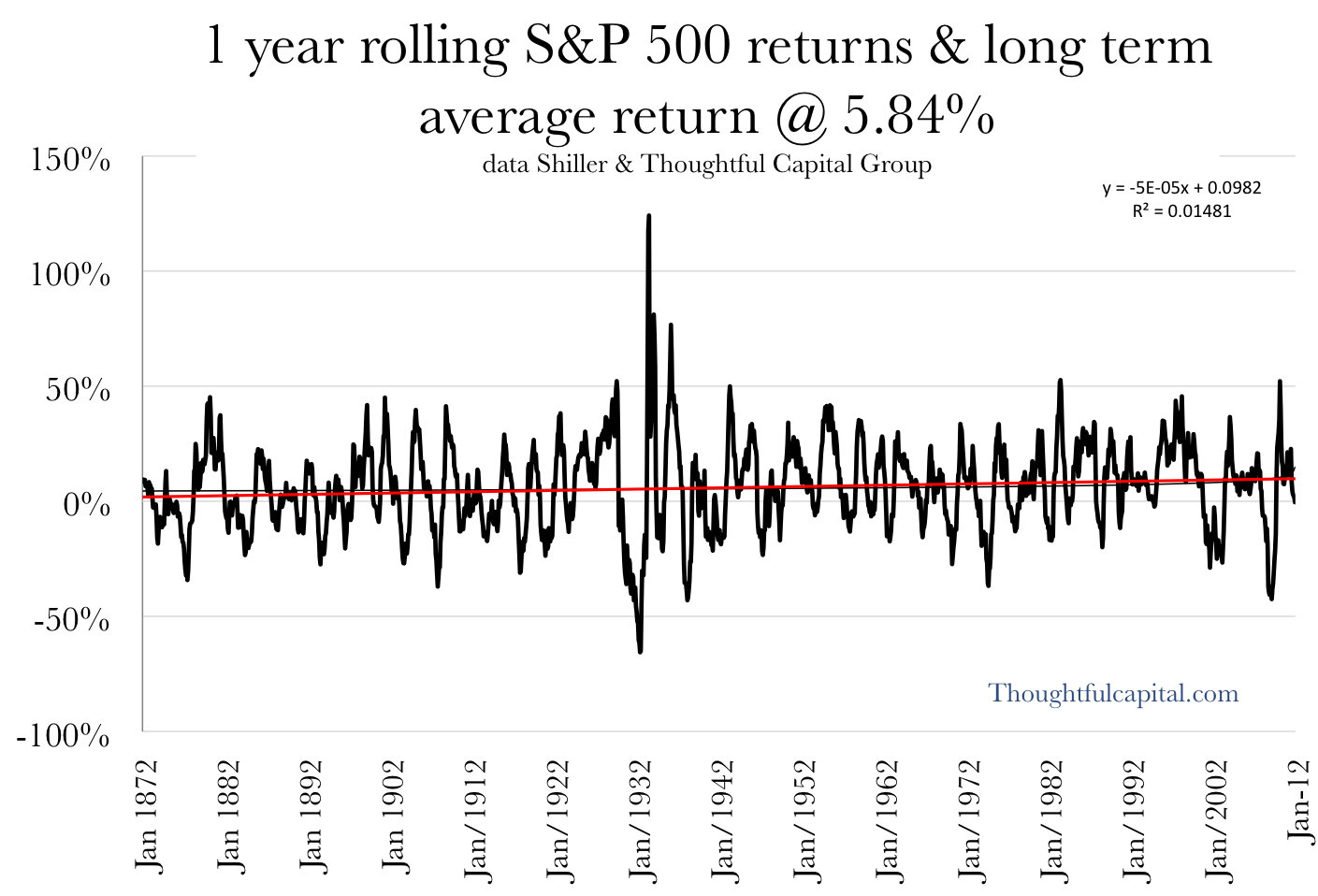 For those of you who are more patient here is the 5-year chart. 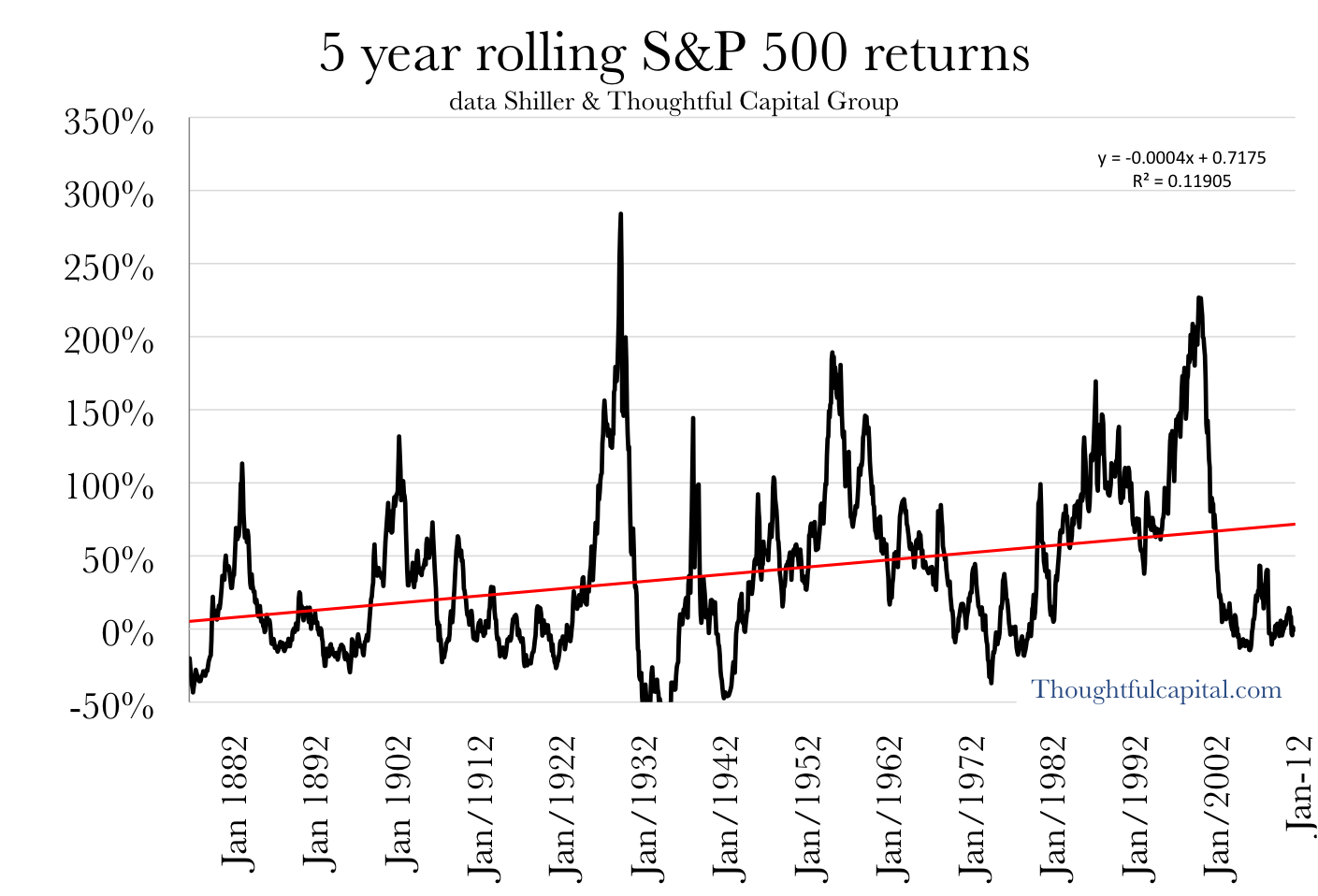 Many argue that stocks for the long run are the best investment. The Shiller data series used here indicates a long term pre-inflation rate of returns of 5.8%/year. If you pay a mutual fund manager 1.5% and never have a tax sale, you still might face some challenges. For the average person, buying an index is probably a good store of value, but not a road to riches. Avoid actively traded mutual funds like the plague and even most hedge funds aren’t so hot in reality. (see the new book "The Hedge Fund Mirage") 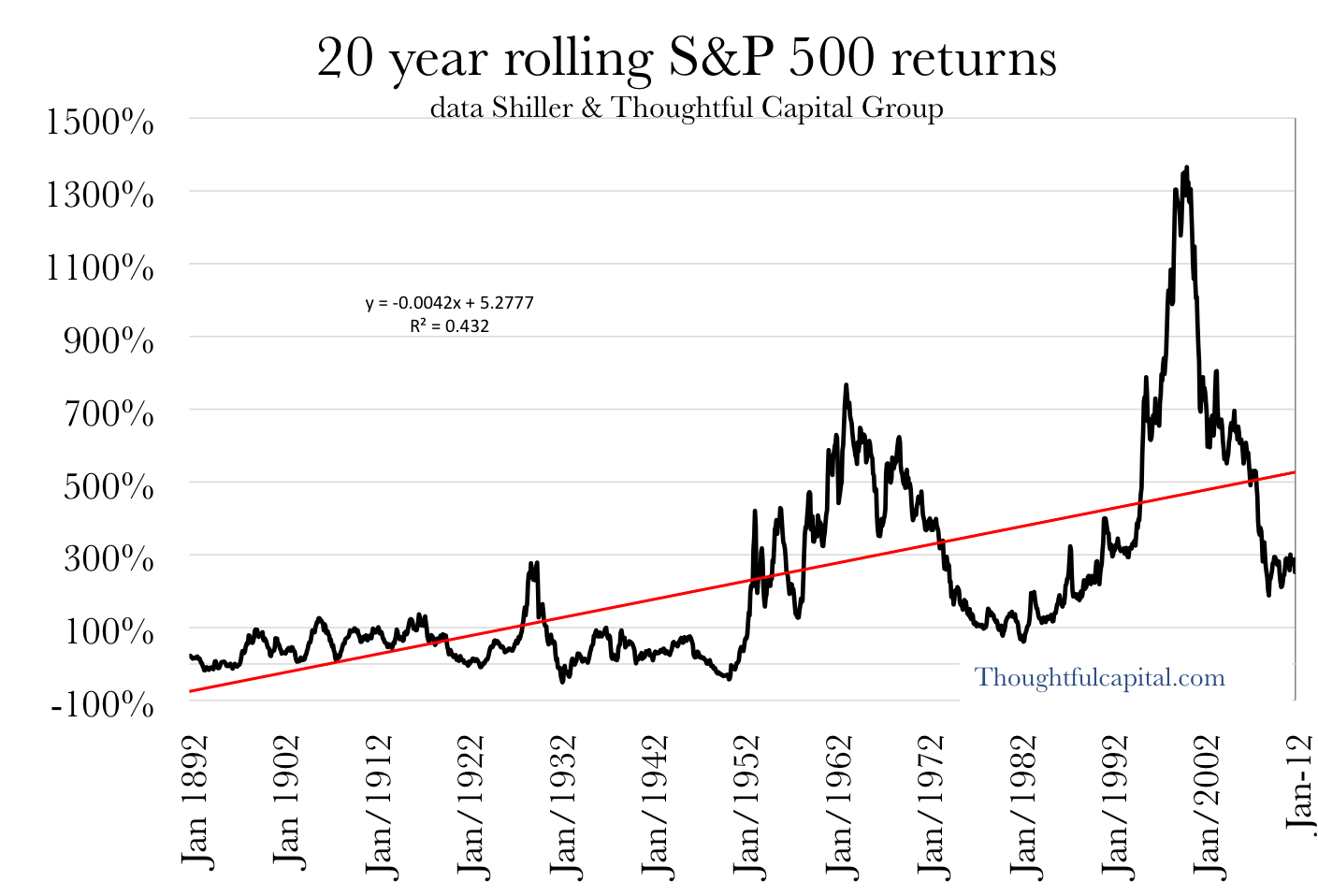 The chart above shows the extraordinary period we just came out of in the 1980s. Prince knew something about long-term equity performance when he sang a song advocating partying like it's 1999.

Loss is typically experienced as the pain of draw down while patient investors wait for their investments to return to breakeven. Here is a look at draw downs; the 1930s and 1940s were really something. Remember inflation isn’t taken out of these numbers. 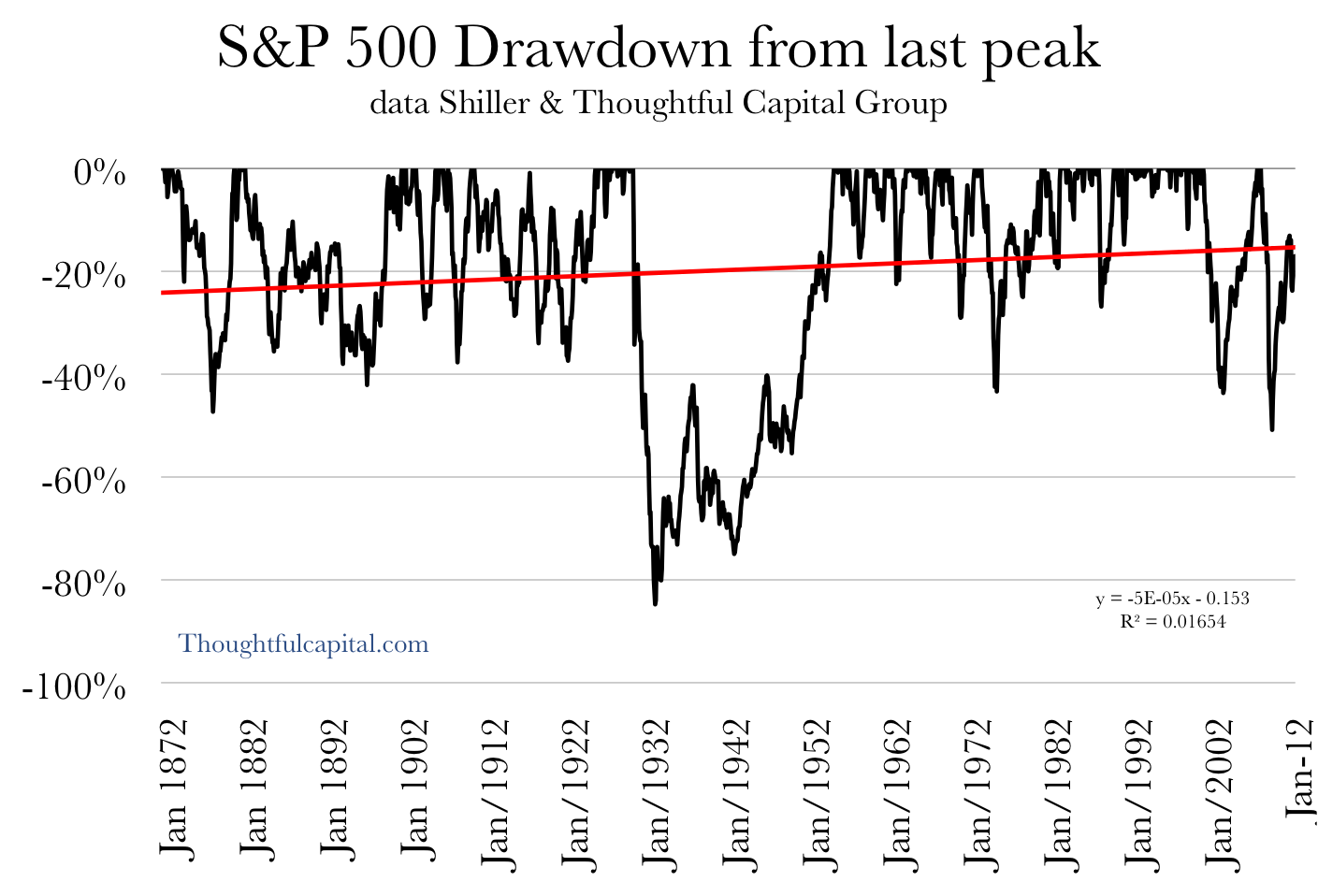 The percentage of asset losses is one thing, but the pain of recovery and patience required is quite another. Here is a look at the period of time that it takes to get back to the prior peak in the S&P 500. 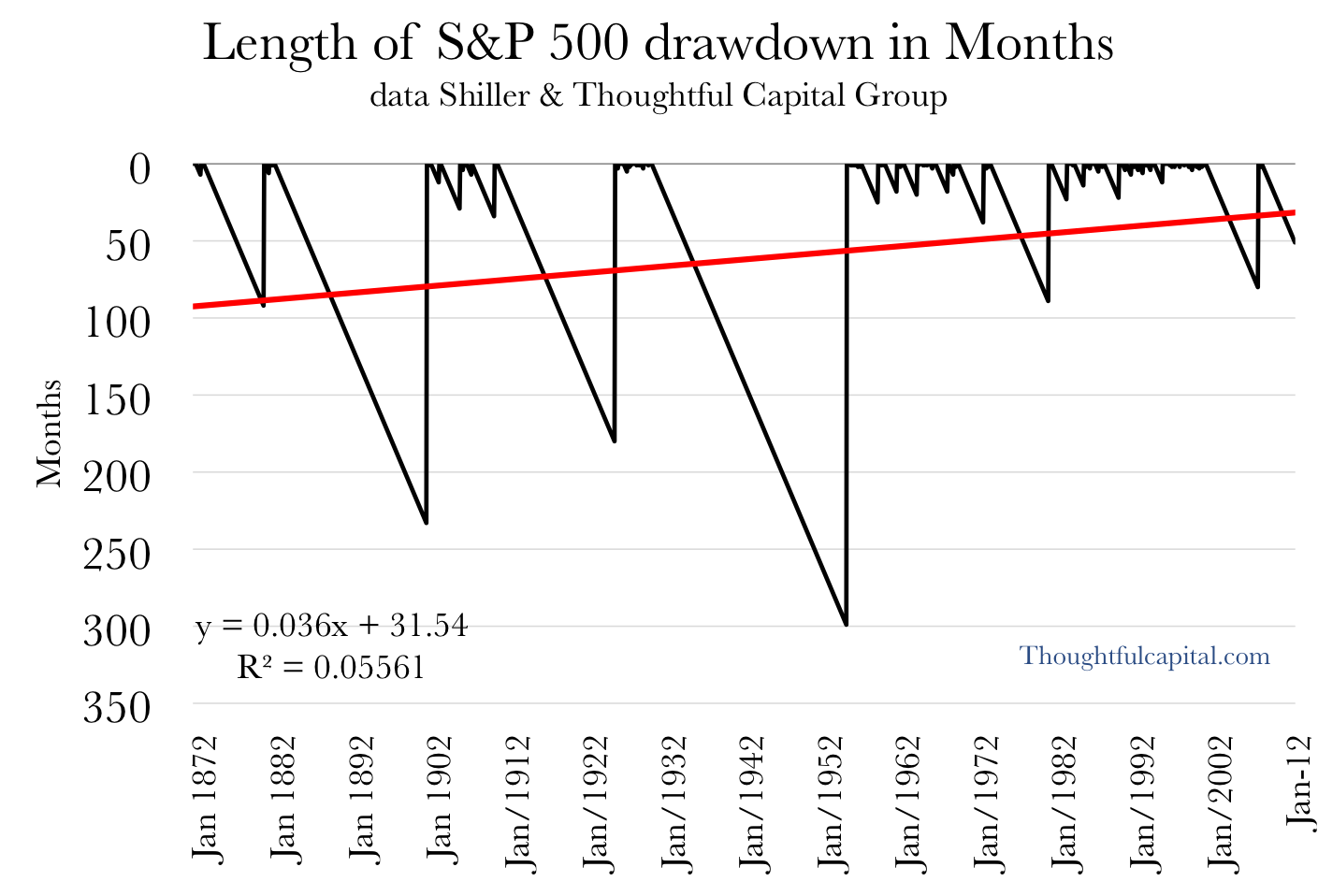 The longest period was 300 months. Imagine waiting 25 years to get to break-even on your investment. I still posit it is impossible to predict the macro market and so put this data up to let people have a historical perspective. It is important to remember that this is a sample of one, namely the US, which has had one of the best equity markets in the 20th century due to not having lost either World War or the Cold war. The time series starts after the Civil War and the crisis of 1873 is probably under-represented in severity as the equity markets were less developed as a function of GDP and the economy at the time. The 1870s had a massive railroad debt bubble, which popped in 1893.

The panic of 1893 didn’t help matters but was resolved. The panic of 1907, which was a liquidity crisis that led to the 1910 meetings and founding of the Federal reserve in 1913, wasn’t a major issue. The great depression, which was a real-estate bubble in farmland and paper assets combined with self-destructive tariff policies was truly destructive, leading to a 46% contraction in industrial production. It should be noted equities didn’t recover until well into the 1950s. Again recall these data aren't CPI/inflation adjusted.

If the equity value creation process was a static moving growth process it would eke out 5.8%/year and the losses would have an expected rate of recovery. The chart below highlights that. 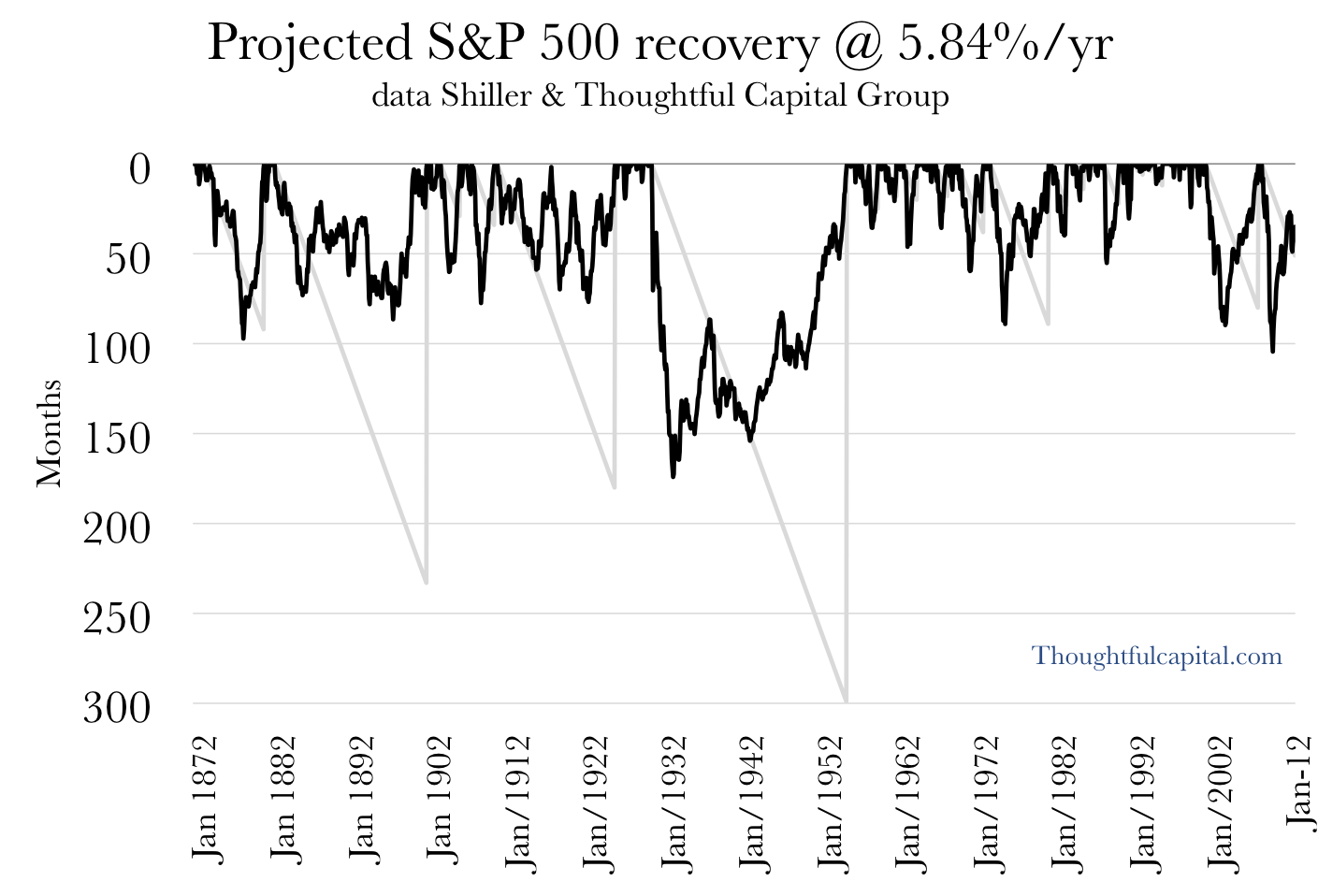 Many people seek to see how interest rate and inflation affect equity prices. Do equities go up during periods of inflation/deflation? How do they react to 10-year bond rates. The two scatter plots below show monthly plots of CPI and 10-Year bond rates vs. equity returns. The correlations are negligible. 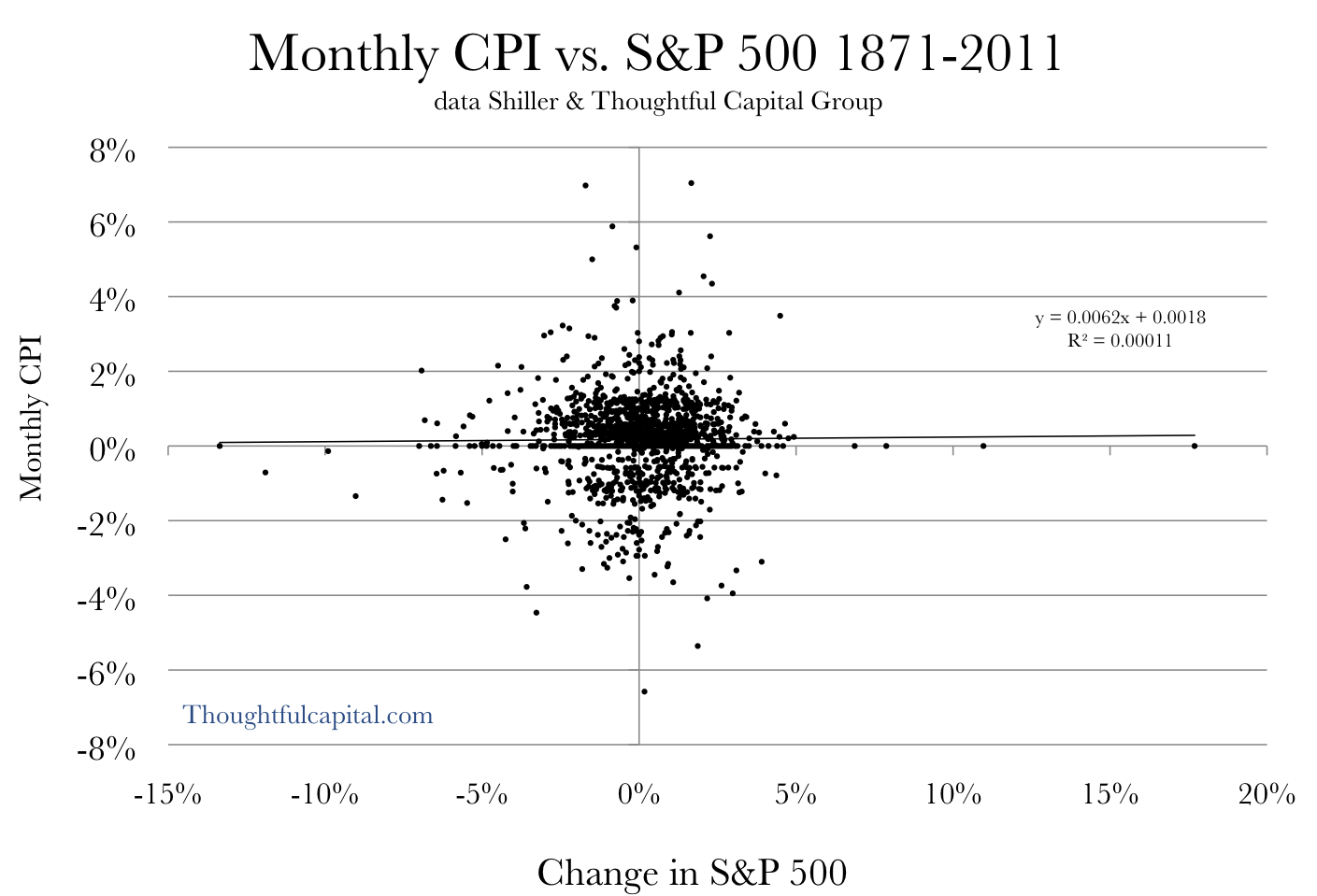 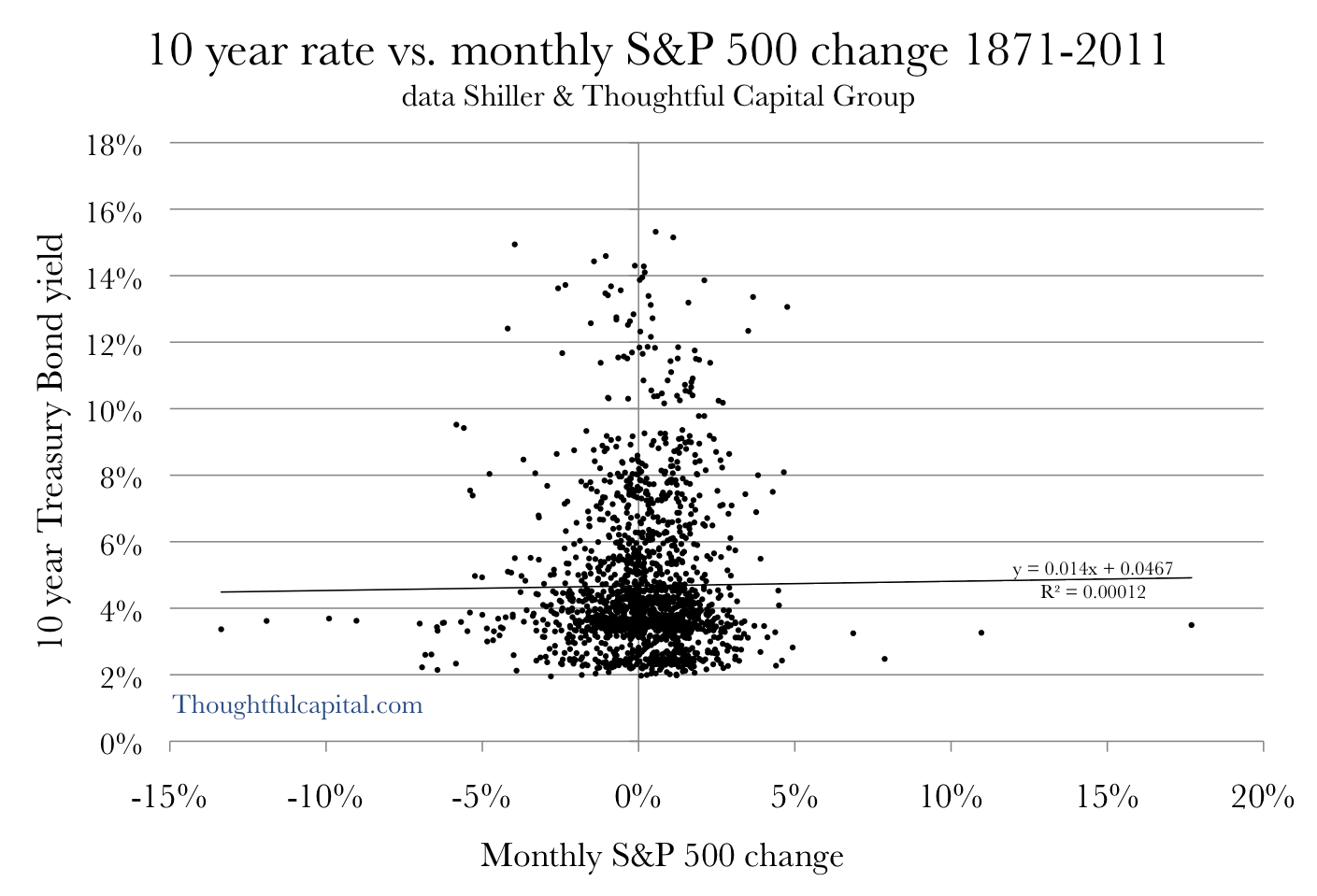 I consider the equity market as represented by the S&P 500 to be a collection of companies engaged in multiple competitions. Each competitive cluster may or may not have a winner. Predicting the winners in value creation is tough, predicting the aggregate of the competitions is nearly impossible in the short run.

In the long run, companies compete, society benefits and the equity market grows. Just don’t fall into an ethnocentric bias of thinking this period of time is unique or special in this process. The technology we have is faster and the world feels smaller, but the total system throughput dynamics are the same.

So for 2012, I predict equities will go up and down while maintaining a very long-term upward trend, which may or may not be present in 2012.

My focus is on businesses that create sustainable value. I view the stock market as a collection of entities involved in multiple competitive clusters trying to eke out earnings. Some of these competitions are intransitive games destroying value for all participants over the long run. I managed to eke out 20% returns in 2011 making it the 4th year in a row of beating the S&P 500 by more than 15% and making positive returns while outperforming 95% of hedge funds. My clients at Thoughtful Capital Group are happy about this thinking very long term.

For those interested in gaining an appreciation of long-term processes, I would suggest reading Niall Fergusson and Kindleberger. Business and economic history is a great tool for keeping perspective amidst the daily news.

Nick Gogerty
39.52K Followers
Nick Gogerty he has worked at a value based hedge fund, a quant forex desk and debt prop desks, various technology and marketing firms and a deep future science research lab as well as one of the world's largest hedge funds. He is to be a guest lecturer at Columbia's Value Investing program fall 2014 and wrote, The Nature of Value published by Columbia University Press. His experience and passion runs deeply across multiple market sectors, audiences and geographies. Mr Gogerty has lived in 6 countries across 3 global regions, solving complex business problems. Previously, Mr. Gogerty developed commodity hedge fund portfolios and indexes, working as a quantitative developer and trader on a proprietary foreign exchange desk in London. In addition, Mr. Gogerty has been a serial entrepreneur in convergence spaces between technology and media. He has also testified before the U.S. Senate on technology and counter-party financial risk with regard to the year 2000 transition. Mr. Gogerty holds a Bachelor of Arts in cultural anthropology from the University of Iowa, an M.B.A. from the Ecole de Ponts et Chaussees in Paris. He holds or has held Series 3, 7, 63 and FSA licenses. Nick holds the Chartered Alternative Investment Analyst (CAIA) (http://www.caia.org/) designation. Mr. Gogerty lives in New York City with his wife Mercedes, where he enjoys reading about finance, technology, design, applied science and sustainable development in emerging economies. visit www.thenatureofvalue.com
Follow
9 Comments