Visa (NYSE:V) is a company that can seemingly do no wrong. The stock has pretty much done nothing but go straight up since its IPO, and certainly, shareholders are quite pleased. And if blistering earnings growth isn't enough for you, it appears that Visa is in talks to buy Visa Europe - something investors cheered in a big way when the news broke. Last time I wrote about Visa, I said the stock was trading at a slight premium to its fair value, but that the nature of its business made it a Buy. The stock hasn't moved much since then, so let's take a look at the company now and see if anything has changed. 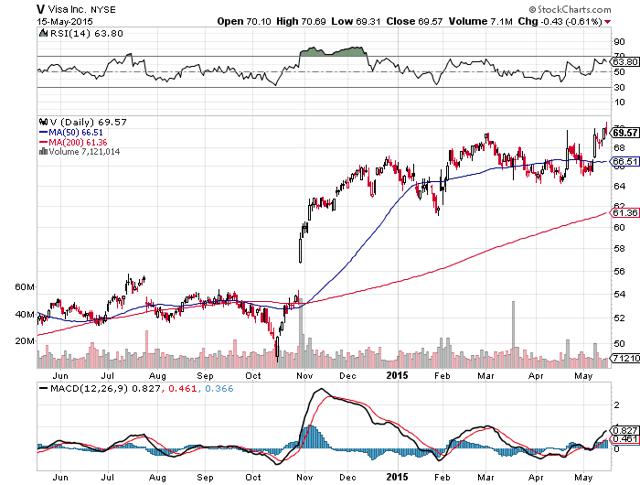 To do this, I'll use a DCF-type model you can read more about here. The model uses several inputs, including earnings estimates, which I've borrowed from Yahoo, dividends, which I've estimated to grow at 20% annually, and a discount rate, which I've set at the 10-year Treasury rate plus a risk premium of 6%.

We can see the fair value of the stock is $63 according to the model, well below the current trading price of $69 and change. That would indicate the stock is moderately overvalued at present, but given the unusual nature of Visa's business, let's take a look at the fundamentals to see if the premium is justified.

When Visa reported earnings a couple of weeks ago, the reaction from investors was one of decided disappointment. The company posted beats on the top and bottom lines, and also produced a very nice 8% revenue gain for the quarter. Despite this, Visa's reaffirmed guidance wasn't good enough, and the stock sold off. But there were a lot of great data points in the quarter that, to me, prove the company is right on track to maintaining its amazing growth for the future.

Total transactions increased 11%, and payment growth increased in a similar fashion. Service revenue also increased by 8%, and more importantly, operating expenses only increased by 1%. This combination of rapidly growing revenue, while maintaining cost discipline is a big reason why Visa shares have been such a great investment in recent years; this is the way to grow earnings rapidly.

The main issue I saw for the quarter was the drag on the US dollar. This is a story we've seen time and again from various multinationals that are struggling with the weakness of global currencies against the dollar, but I believe this condition will be at least somewhat temporary. The dollar has shot up against the world's currencies, and that is a condition that cannot persist forever. Currencies don't normally move as swiftly as the dollar has during its march higher, and I expect this will abate over time; in fact, that has already begun, so I don't think this is a huge deal.

I touched upon this last time, but Visa shares - when valued using traditional methods - will always look expensive. This is a company that is essentially a toll booth to commerce, with an enormous recurring and growing revenue stream with huge scalability. Thus, it will always command a premium from investors, and that premium is well deserved. At present, the stock is trading at 23 times forward earnings - a large multiple indeed. But given the nature of its business and the fact that it is growing earnings at a high-teens rate every year, it seems very reasonable to me.

The thing is that even if V simply hits its fiscal 2017 earnings goal of $3.51 and maintains its current multiple, the stock should trade for about $81 next year - roughly 20% higher from today's price. Such is the power of huge earnings growth, you don't even need multiple expansion for the stock to post large gains every year. And given V's strong buyback activity, the stock has a 3-5% tailwind in EPS each year anyway simply from a reduced share count, making it much easier to meet or exceed earnings growth goals.

The recent announcement that Visa was interested in buying Visa Europe sent the stock soaring, and with good reason. Visa Europe made $246 million last year, but is also growing rapidly - more so than even Visa itself. The purchase price of $15-20 billion seems very steep from an earnings standpoint, but we'll have to wait and see what the actual price is if a deal gets done. The merger would provide obvious benefits, including increased volume and improved scalability in Visa's expense structure, which should boost margins over time. The deal will face some regulatory hurdles, however, so we'll just have to wait and see - but it would be a great move for Visa.

Overall, I still like Visa very much here. The company is in an enviable position in its market, and that should provide fuel for growth for a very long time to come. The stock looks a little expensive here, but it always does; that's the price you pay for owning the toll booth. I find the multiple to be reasonable, however, as Visa backs up its earnings multiple with strong earnings growth, so I'm sticking with my long call. You can do much worse than a rapidly growing business with a huge moat.