Silver has been trapped in a severe bear market for the last three years, with it still down by a massive 61% from the ten-year high of $48.70 per ounce hit in April 2011. Recently, silver has rallied, recovering by almost 11% from its 52 week low to now be trading at around $17 per ounce. While this rally increasingly appears to be short-lived, there are a number of catalysts that indicate a favorable long-term outlook for silver.

For these reasons I believe it is significantly undervalued and poised for a massive rally, with its price set to climb higher over the long term, offering investors far better potential returns than gold or other precious metals.

One of the key measures of whether silver is undervalued or overvalued in comparison to gold is the gold-to-silver ratio. This ratio measures the correlation between silver and gold prices, allowing investors to determine when it is the optimal time to invest in silver in preference to gold. The relationship between gold and silver prices, as well as the gold-to-silver ratio for the last two decades, is illustrated below. 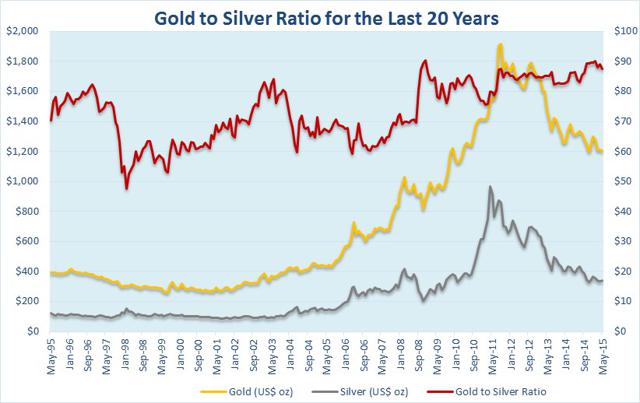 This indicates that silver is heavily undervalued in comparison to gold and that now is the optimal time to invest in silver.

If the ratio were to fall to where it was during the height of the gold bull market, silver based on current prices would need to appreciate by around 86% in value. While if it even returned to the historical average of 50 ounces of silver to one ounce of gold, it would need to appreciate in value by 41%, still offering considerable potential upside to investors.

However, investors should remember that in comparison to gold, silver is far more volatile because of far lower market liquidity coupled with fluctuations in demand for industrial uses, the fabrication of jewelry and as a store of value.

This means there are far more influences on the demand for silver, and hence its price, than with gold, helping to explain the volatility witnessed since the collapse of the bull market in late 2011.

Nonetheless, unlike gold, silver is an industrial metal with a wide range of uses, primarily because of its conductive properties, with it being the most electrically conductive element followed by copper and gold. This sees it in great demand as a component in a range of industrial applications and hi-tech products.

For 2014 alone, industrial demand for silver made up 56% of its total demand and industry has been the primary consumer of silver for some time. 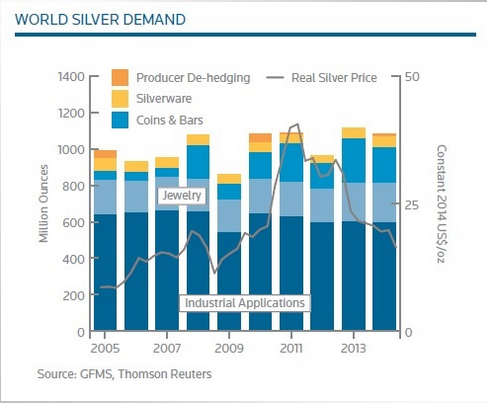 This compares to gold where industrial demand only made up 8% of total gold demand in 2014, with the largest driver of demand being for investment purposes.

In fact, when we look at the next chart it is easy to see that overall industrial demand for silver has been in decline for the last decade and this can be primarily attributed to the virtual extinction of traditional film-based photography.

However, when we take a deeper look at the numbers it can be seen that demand for silver in a range of industrial applications continues to grow. 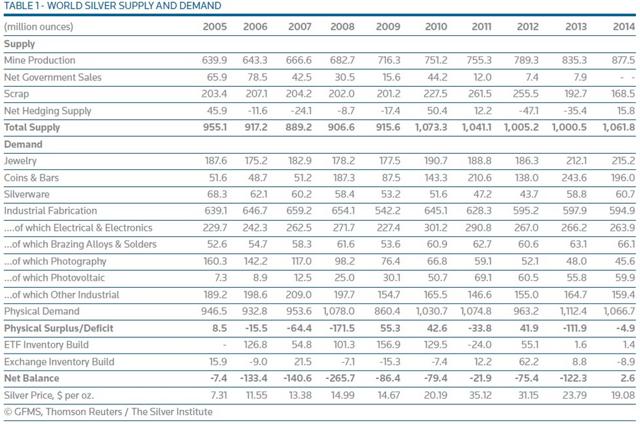 Silver has become an integral component in a range of hi-tech applications including flexible touch-screens, semi-conductor stackers and light emitting diodes (LEDS). Demand for these components is set to grow exponentially over the coming years as their use in portable consumer electronics, medical and other applications continues to rise.

Silver is also a key component in the manufacture of photovoltaic cells (PVs) that are used in solar panels to convert our sun's energy into electricity. The demand for PVs is expected to grow quite strongly between now and 2018.

Furthermore, the demand for silver for use in PVs over the last ten years has grown eightfold, and this trend is expected to continue over the long term. This is because demand for PVs is expected to explode as a number of countries push ahead with instituting green energy targets.

The world's second largest economy, China, has set some aggressive green energy targets because of growing pollution. In 2014 it added 12 GWs of solar power, and in 2015 plans to boost that by 48% to add 17.8 GWs of solar power over the course of the year as it battles to fight pollution.

Based on 2.8 million ounces of silver being required to manufacture sufficient PVs to generate 1 GW, this would see China's demand for silver for use in PVs increase by 16 million ounces or 48% year-over-year.

Even more compelling is that China is targeting to triple its solar power capacity between now and 2020, to 100 GWs. For this to occur, it alone would require 188 million ounces of silver.

But the growing demand for PVs, and thus silver, doesn't end there. A number of other countries are also aggressively targeting to boost the solar power capacity.

Between now and 2018, the European Photovoltaic Industry Association expects Europe to add around 69 GW of additional solar capacity to its energy grid, therefore requiring 193 ounces of silver.

Japan has also established some ambitious solar energy targets in the wake of the Fukushima nuclear disaster, that has already seen it double its solar power capacity since 2011. This trend is expected to continue with plans underway to build more solar power plants. Even Brazil is focused on boosting its solar capacity with plans to build a 350 megawatt (MW) plant on the Amazon's Uatumã River.

This demand for solar energy will see the demand for silver as an integral component in the manufacture of PVs continue to grow exponentially, helping to drive silver prices higher.

The growing demand for silver for use in the manufacture of these hi-tech components will add further pressure to an already constrained supply situation.

According to the Silver Institute, demand for physical silver in 2014 outstripped supply by half a percent, or 4.9 million ounces, and this physical supply deficit can only get worse. For 2015, it has been estimated that supplies of physical silver will decline by around 3.5%, primarily because of falling supplies from mining.

This is because silver miners have sharply decreased investment in exploration and mine development because of markedly weaker silver prices, that have made many ore deposits uneconomical to mine.

If we take a look at a snapshot of the largest primary silver miners, you can see that with the exception of Pan American Silver (PAAS) and Silver Standard Resources (SSRI), the other miners have sharply decreased their capital budgets as silver prices have fallen. 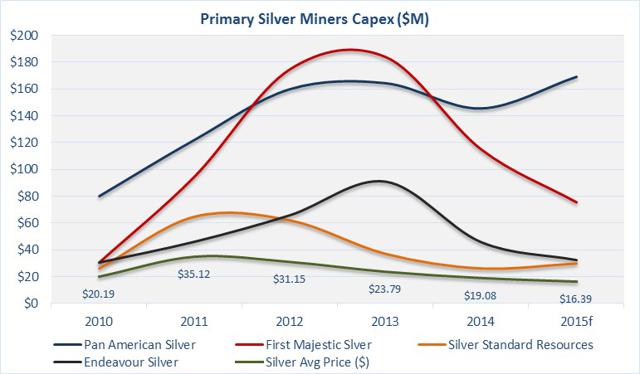 Such a sharp decline in investment in exploration and mine development will have a long-term impact on silver supply because there is a long lead-in time associated with identifying and exploiting new ore deposits, as well as with ramping up production from existing mines.

I expect this constrained supply situation coupled with growing demand to drive silver prices higher over the long term, while placing a floor under existing prices.

Risks to the investment thesis

Any precious metals investment does not come without risk, particularly with the growing short-term volatility of gold, and in particular silver, prices that we are now witnessing.

Clearly, the fundamentals are in place to support a solid rebound in silver, although it will take time for this rally to occur with short-term volatility set to remain a characteristic of silver prices for the foreseeable future.

Speculative paper trading coupled with higher illiquidity than gold continues to have a negative impact on silver, while significantly increasing the overall volatility of the metal. This means that in the short term it will continue to experience wild price swings and its recent rally will more than likely retrace.

As a result, I certainly wouldn't be "betting the farm" on silver, but it is an investment worthy of consideration, with it offering investors the benefit of solid long-term potential upside coupled with the ability to hedge against further global geopolitical and economic uncertainty because of its status as a safe-haven investment.