The fast-growing multi-billion mobile games industry is one more reason to stay (or go) long on Apple (NASDAQ:AAPL). Digi-Capital estimates that sales from mobile games will hit $29 billion this year (and $45 billion by 2018). Annual revenue from mobile games-related purchases also will enjoy a 15% CAGR.

Even though Apple does not develop mobile games, Digi-Capital still recognized the iPhone company as the leader in mobile games. 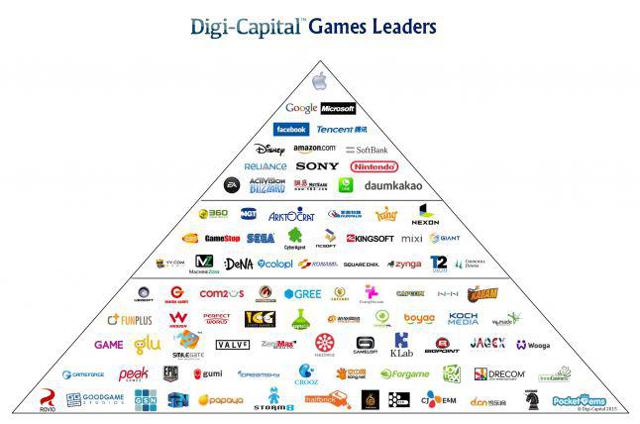 Digi-Capital's estimate is a little lower than Newzoo's previous assessment that revenue from mobile games will hit $30.3 billion this year and $40 billion by 2017. However, I strongly agree with the assessment from Digi-Capital.

As per the Q1 2015 report of App Annie, global sales from iOS apps increased its lead over sales of Android apps. This in spite of Google Play having 70% more number of downloads.

Mobile games remain the dominant moneymakers in Google Play and iTunes Store. The better-than-predicted strong sales of the iPhone 6/iPhone 6 Plus in China could substantially increase Apple's share in mobile games. China has risen to become the top country when it comes to the number of iOS app downloads. 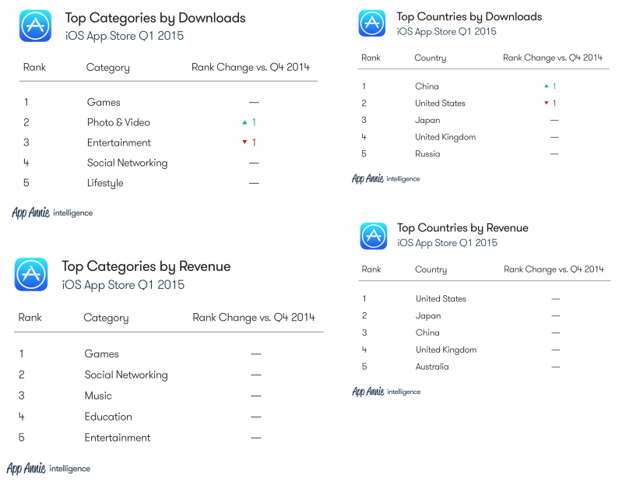 The pay-2-win nature of top-grossing games like Clash of Clans, Game of War: Fire Age and Marvel Contest of Champions is prevalent among big-spending mobile gamers. Newzoo reports that more than 40% of mobile gamers in the U.S., Great Britain and Turkey buy in-app premium items. 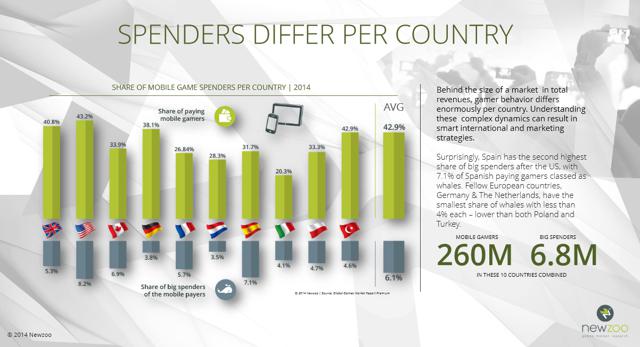 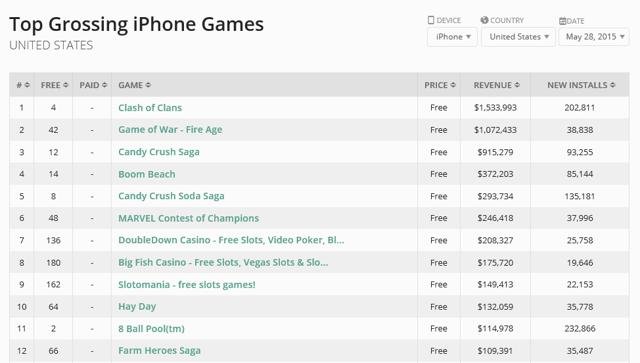 Newzoo says the typical big-spending mobile gamer is usually a male person with a steady high-paying job. This is partly in line with Chitika's claim that the iPhone is dominant among U.S. users with college degrees/high-income employment. The testosterone-fueled competition in freemium strategy/fighting games inspire gamers to use the power of their credit cards to get ahead of other players. 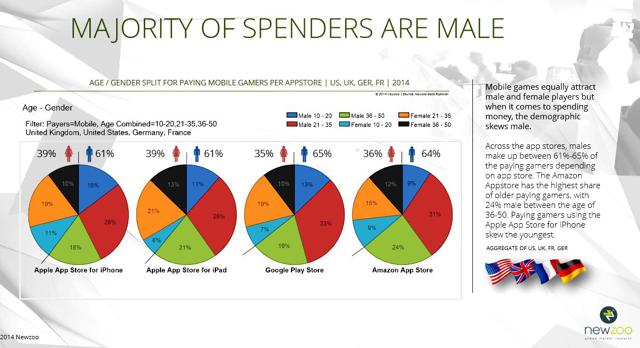 Asia Also A Gold Mine For iPhone Games

Apple should continue to leverage the popularity of iPhones in China and other Asia Pacific countries. This APAC region is still the biggest revenue generator for mobile games, $12.2 billion vs. the $4.9 billion of North America. The recent negotiations with Alibaba (BABA) over the possibility of bringing Apple Pay to China could mean more Chinese gamers could do in-app purchases on their iPhone games. 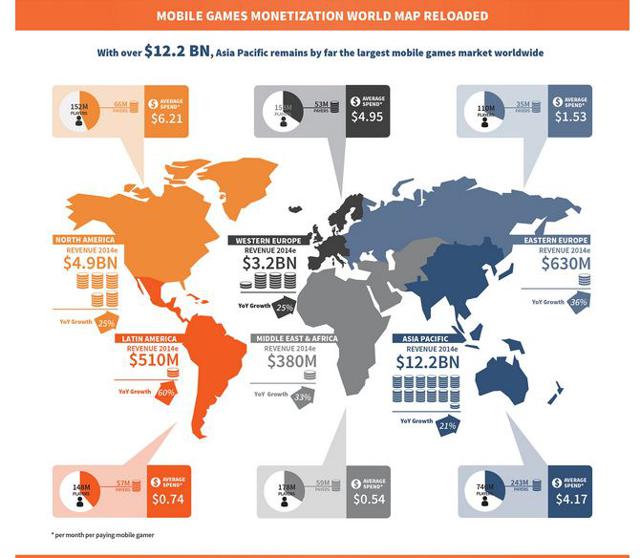 There are 383 million mobile gamers in China and some of them likely bought the iPhone 6 or iPhone 6 Plus. Chinese mobile gamers spend an average of $23.5 on in-app purchases every month.

Japan, where the iPhone also dominates, touts the most generous of mobile gamers in Asia. 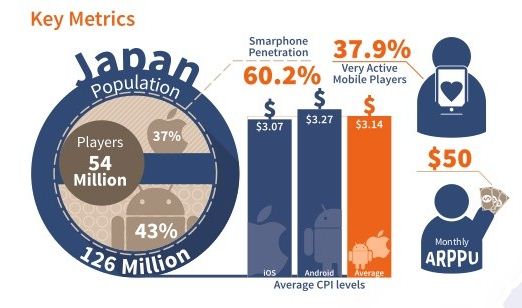 I'm a 41-year-old Asian male who also sometimes use my credit card to remain competitive on pay-2-win mobile games. My latest sin today is to waste 1,650 Crystals (worth $37.99) to buy a package of three 3-star heroes in Marvel Future Fight. 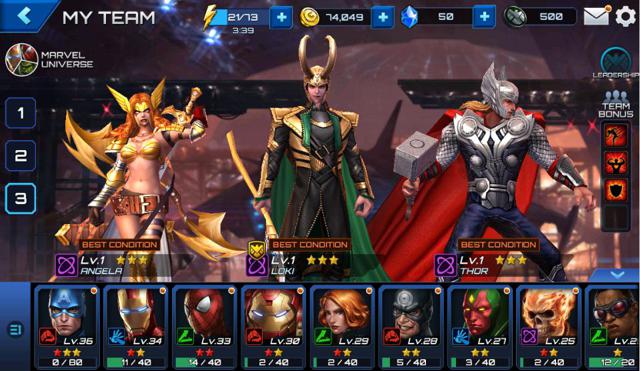 I agree with the 28 analysts who made a Buy Rating on AAPL. The persistent popularity of iOS devices in North America, Western Europe, Japan and China compels me to believe that Apple will continue to be the top beneficiary of the surging mobile games industry.

The iPhone 6 still outperformed the new Samsung (CCNLF) Galaxy S6 in gaming benchmark tests. The Galaxy S6 boasts octa-core processors and 3GB of RAM. However, the iPhone 6, which only has a dual-core A8 processor and 1GB of RAM, still delivers a higher frames-per-second performance on advanced, console-quality mobile games like Marvel Contest of Champions and Modern Combat 5. 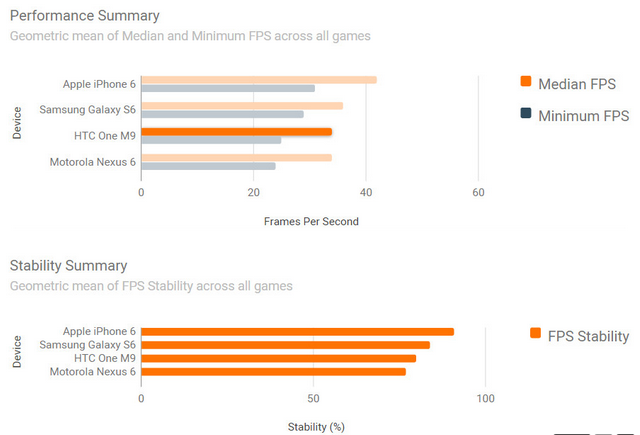 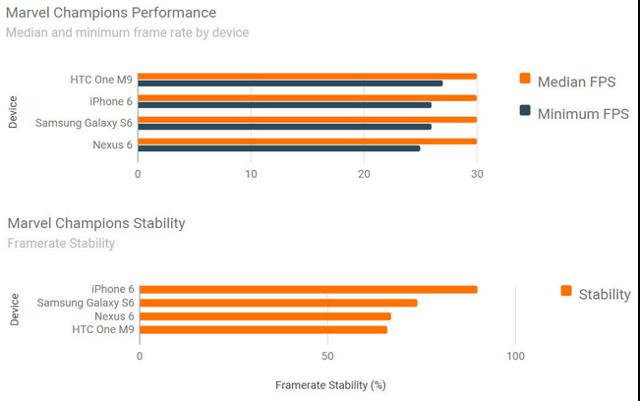 Motek Moyen
6.77K Followers
I am 100% Filipino, with 25% maternal Chinese blood. My background is 20 years in the creative/advertising industry. I am a very bad writer, but please refer to my TipRanks history, or do a manual curation of my investing ideas here at Seeking Alpha. You will know that my stock picks are mostly winners. I like technical indicators and the Piotroski F-score is usually my no. 1 factor when evaluating the investment quality of a stock. My 90s college adventure involved wasting time in B.S. Mathematics, Diploma in Commercial Advertising, and B.S. Computer Science.I am a well-trained computer technician, video editor, game content creator, web developer, graphic/UI designer, and social activist. I will start learning C# in early January 2023. If I can't learn doing production-level Blazor apps by end of June 2023, I will just go back to improving my Python skills. I am too old and sick to be learning a new programming language like C#. I DO NOT gamble/invest on U.S. stocks. My right lung problem has given me a bad heart. I'm not fit enough to do stock trading.

Disclosure: The author is long AAPL, KING. The author wrote this article themselves, and it expresses their own opinions. The author is not receiving compensation for it (other than from Seeking Alpha). The author has no business relationship with any company whose stock is mentioned in this article.