1) The Market Has Generated 10% Annual Returns

One of the biggest myths perpetrated by Wall Street on investors is showing individuals the following chart and telling them that over the "long term", the stock market has generated a 10% annualized total return. 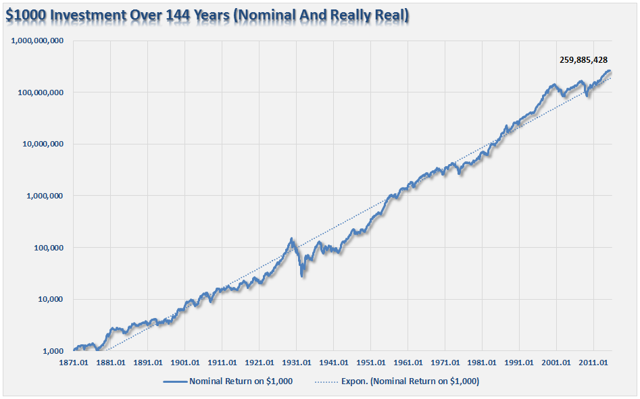 The statement is not entirely false. Since 1900, stock market appreciation plus dividends have provided investors with an AVERAGE return of 10% per year. Historically, 4%, or 40% of the total return, came from dividends alone. The other 60% came from capital appreciation that averaged 6% and equated to the long-term growth rate of the economy.

However, there are several fallacies with the notion that the markets long term will compound 10% annually.

1) The market does not return 10% every year. There are many years where market returns have been sharply higher and significantly lower.

2) The analysis does not include the real-world effects of inflation, taxes, fees and other expenses that subtract from total returns over the long term.

The chart below shows what happens to a $1000 investment from 1871 to the present, including the effects of inflation, taxes and fees. (Assumptions: I have used a 15% tax rate on years in which the portfolio advanced in value, CPI as the benchmark for inflation and a 1% annual expense ratio. In reality, all of these assumptions are quite likely on the low side.) 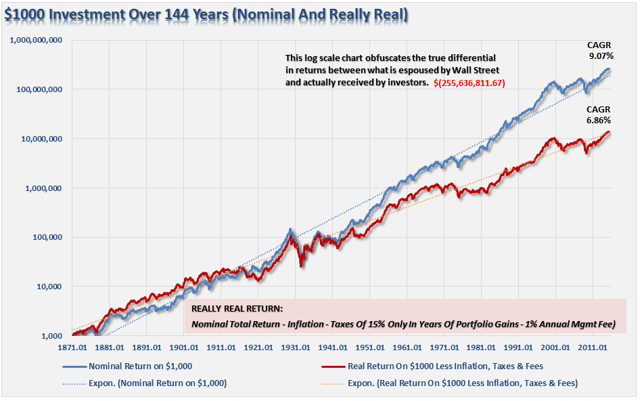 As you can see, there is a dramatic difference in outcomes over the long term.

From 1871 to the present, the total nominal return was 9.07%, versus just 6.86% on a "real" basis. While the percentages may not seem like much, over such a long period, the ending value of the original $1000 investment was lower by an astounding $260 million.

Importantly, as stated previously, and as I will discuss more in a moment, the return that investors receive from the financial markets is more dependent on "WHEN" you begin investing.

2) I Can Beat/Outperform The Stock Market

No, you can't. I discussed this idea in much more detail in "Why You Can't Beat The Index." However, here is the important point.

The issues of stock buybacks, the "substitution effect," taxes, expenses and fees all lead to underperformance of the index. In a recent article, a study found that only 1 in 4 mutual fund managers outperform the market index over long periods. Of those that outperformed, the average outperformance was .12% before fees and expenses. However, the fees and expenses were larger than the level of outperformance. This, of course, does not also include the tax impact on gains and income.

The problem with chasing performance, of course, is that once you fall behind, you take on MORE risk to try and make up the difference. This leads, ultimately, to bigger mistakes that cost investors dearly.

This could not be more to the point than anything that we have discussed today. Comparing your performance to an index is the most useless, and potentially dangerous, thing that you can do as an investor.

"Comparison is the cause of more unhappiness in the world than anything else. Perhaps it is inevitable that human beings as social animals have an urge to compare themselves with one another. Maybe it is just because we are all terminally insecure in some cosmic sense.

Comparison in the financial arena is the main reason clients have trouble patiently sitting on their hands, letting whatever process they are comfortable with work for them. They get waylaid by some comparison along the way and lose their focus. If you tell a client that they made 12% on their account, they are very pleased. If you subsequently inform them that 'everyone else' made 14%, you have made them upset. The whole financial services industry, as it is constructed now, is predicated on making people upset so they will move their money around in a frenzy. Money in motion creates fees and commissions. The creation of more and more benchmarks and style boxes is nothing more than the creation of more things to COMPARE to, allowing clients to stay in a perpetual state of outrage."

The major learning point is that chasing a "benchmark index" is a mistake because of the following reasons:

3) Your Financial Plan Says You Will Be Just Fine

One the biggest mistakes that investors make is in planning assumptions for their retirement. I wrote on this idea in much detail recently:

"There is a massive difference between compounded returns and real returns as shown. The assumption is that an investment is made in 1965 at the age of 20. In 2000, the individual is now 55 and just 10 years from retirement. The S&P index is actual through 2014 and projected through age 100 using historical volatility and market cycles as a precedent for future returns." 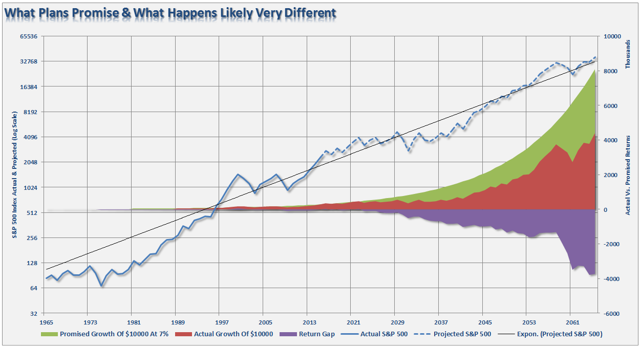 "While the historical AVERAGE return is 7% for both series, the shortfall between "compounded" returns and "actual" returns is significant. That deficit is compounded further when you begin to add in the impact of fees, taxes and inflation over the given time frame.

The single biggest mistake made in financial planning is NOT to include variable rates of return in your planning process.

It is often stated that you should be invested in the markets, because there has NEVER been a 10-year period that has produced negative returns for investors. That is simply not true. 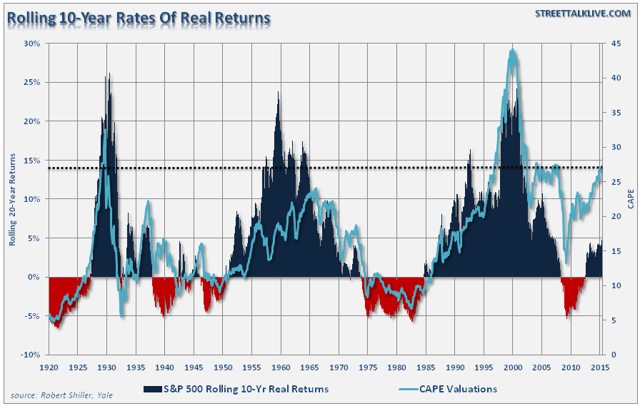 There are two important points to take away from the data. First is that there are several periods throughout history where market returns were not only low, but negative. Secondly, the periods of low returns follow periods of excessive market valuations.

In other words, it is vital to understand that it is "WHEN" you begin investing that affects your eventual outcome.

As I wrote previously:

"The chart below compares Shiller's 10-year CAPE to 10-year actual forward returns from the S&P 500." 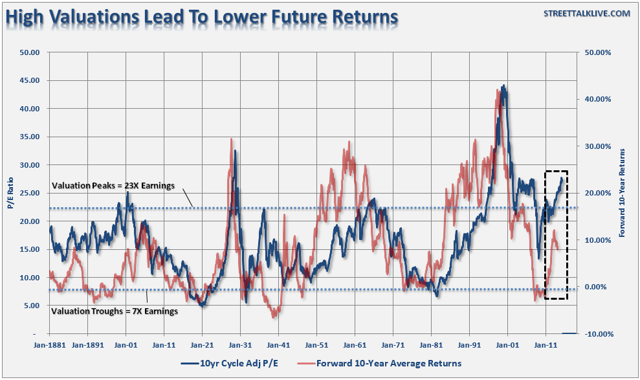 "From current levels history suggest that returns to investors over the next 10-years will likely be lower than higher. We can also prove this mathematically as well as shown.

Capital gains from markets are primarily a function of market capitalization, nominal economic growth plus the dividend yield. Using John Hussman's formula we can mathematically calculate returns over the next 10-year period as follows:

Therefore, IF we assume that GDP could maintain 4% annualized growth in the future, with no recessions, AND IF current market cap/GDP stays flat at 1.25, AND IF the current dividend yield of roughly 2% remains, we get forward returns of:

But there're a "whole lotta ifs" in that assumption. More importantly, if we assume that inflation remains stagnant at 2%, as the Fed hopes, this would mean a real rate of return of -0.5%. This is certainly not what investors are hoping for."

5) You Can't Time The Market - Just Buy And Hold

There are no great investors of our time that "buy and hold" investments. Even the great Warren Buffett occasionally sells investments. Real investors buy when they see value and sell when value no longer exists.

While there are many sophisticated methods of handling risk within a portfolio, even using a basic method of price analysis, such as a moving average crossover, can be a valuable tool over long-term holding periods. Will such a method ALWAYS be right? Absolutely not. However, will such a method keep you from losing large amounts of capital? Absolutely.

The chart below shows a simple moving average crossover study. The actual moving averages used are not relevant, but what is clear is that using a basic form of price movement analysis can provide a useful identification of periods when portfolio risk should be REDUCED. Importantly, I did not say risk should be eliminated, just reduced. 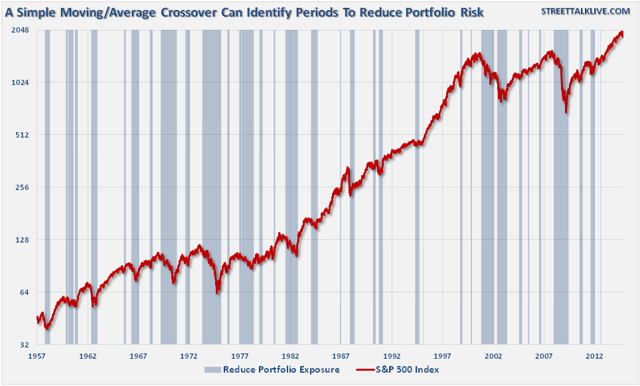 Again, I am not implying, suggesting or stating that such signals mean going 100% to cash. What I am suggesting is that when "sell signals" are given that is the time when individuals should perform some basic portfolio risk management such as:

The reason that portfolio risk management is so crucial is that it is not "missing the 10-best days" that are important; it is "missing the 10-worst days." The chart below shows the comparison of $100,000 invested in the S&P 500 index (log scale base 2) and the return, when adjusted for missing the 10 best and worst days, respectively. 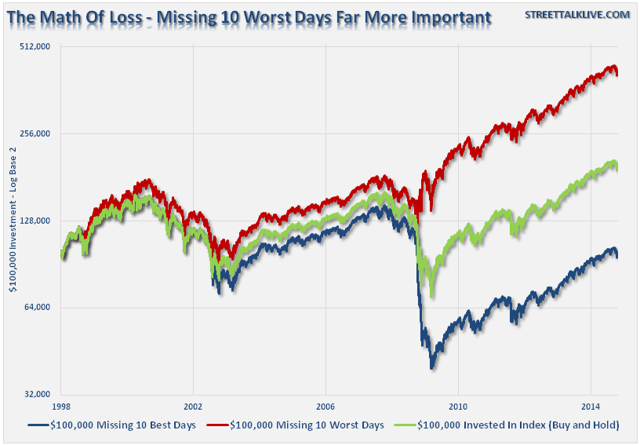 Clearly, avoiding major drawdowns in the market is key to long-term investment success. If I am not spending the bulk of my time making up for previous losses in my portfolio, I spend more time growing my invested dollars towards my long term goals.

There are many half-truths perpetrated on individuals by Wall Street to sell product, gain assets, etc. However, if individuals took a moment to think about it, the illogic of many of these arguments is readily apparent.

Chasing an arbitrary index that is 100% invested in the equity market requires you to take on far more risk that you realize. Two massive bear markets over the last decade have left many individuals further away from retirement than they ever imagined. Furthermore, all investors lost something far more valuable than money - the TIME needed to achieve their goal.

To win the long-term investing game, your portfolio should be built around the things that matter most to you.

The index is a mythical creature, like the unicorn, and chasing it has historically led to disappointment. Investing is not a competition, and there are horrid consequences for treating it as such.

Follow
11 Comments
To ensure this doesn’t happen in the future, please enable Javascript and cookies in your browser.
Is this happening to you frequently? Please report it on our feedback forum.
If you have an ad-blocker enabled you may be blocked from proceeding. Please disable your ad-blocker and refresh.