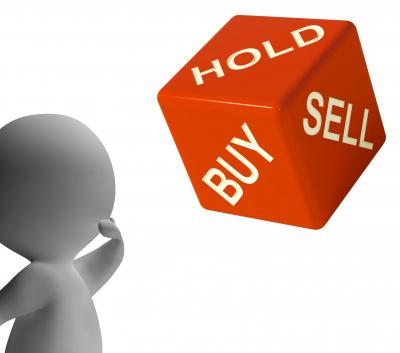 Many of us who utilize stock screen programs have seen the PEG option; the Price-to-Earnings Ratio to Earnings Growth. According to Peter Lynch, "The p/e ratio of any company that's fairly priced will equal its growth rate. I'm talking about growth rate of earnings here." Later, he says, "We use this measure all the time in analyzing stocks for the mutual funds."

There are limitations to this function, and I won't get into all of them, but it is worth pointing out that it has two mathematical drawbacks, from it being a piecewise operation. First, it assumes that a company has been profitable for the trailing 12 months. For any company to have a P/E ratio, it has to be profitable. While that is usually a good thing, it does eliminate young companies that are not yet in the black from any consideration. For one who is looking for the next big stock, the analyst might miss opportunities if s/he were solely reliant on PEG. Second, it only works if the growth rate for earnings is positive. Again, this is not a negative, but if one is not careful in their workflow, then it is conceivable that one could divide a negative P/E with a negative growth rate and yield a positive result; that cannot happen.

In researching a way around this, I took another look at the Price-to-Sales ratio (PSR). I have written how this ratio has been utilized by Ken Fisher, and how it can improve your screening results. Generally, one should look for companies with a PSR less than 1.5, and 0.75, according to Fisher. By using this metric, one is able to find relatively cheap stocks.

The question I have is, "How cheap is cheap?" There are two definitions that one can use for the word "cheap." First, it implies that something is low cost. For the purveyors of PSR, it assumes that one should not have to overpay for a company's revenues. If one says that the PSR should be less than 1.5, then the forecaster is saying that one should not have to pay more than $1.50 for every $1 in revenues. The second implied definition for "cheap" is that it is something of poor quality. It's the kind of thing one finds at a local flea market. It might be inexpensive, but the quality of the product is so bad, that it could not warrant a higher price. Perhaps a company has a low PSR because it is simply not a very good business. If one merely looks for low PSR, then there is the potential for dumpster diving, and coming out with garbage.

For these reasons, I humbly suggest a modified version of the PEG ratio. Because of the lack of true imagination, I will call it the PSG (Price/Sales-to-Growth) ratio. The formula is pretty easy to calculate with a spreadsheet. Simply divide the PSR by the five-year revenue growth rate (as a percent). For example, Apple (AAPL) has a current PSR of 3.51. Its five-year revenue growth rate is 33.63%. If one divides 3.51 by 33.63, it yields a PSG of 0.10.

I have attempted to find out if there has been any major works or discussions regarding PSG. There is a blog talking about it, but the conversation diverts to a discussion about free cash flow. Other than that, any search about PSG leads me to a threads about the merits of PEG, financial pages about the company Performance Sports Group (PSG), or about a soccer team in Paris. There does not seem to be any real discussion about it, and that is surprising.

What I wanted to know was whether it was possible to find a PSG ratio that would yield better results than the overall market. Chart 1 shows the results. It truncates the bins based 0.1 intervals for the ratio. Each category, including the data for the overall market, assumed each stock was equally weighted, regardless of market cap or price. All data is for 12 month returns for monthly rolling periods since 1997. 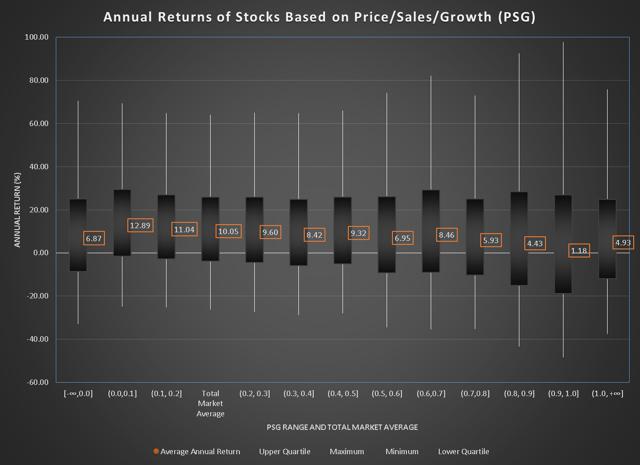 Where do we go from here?

While it looks like the potential for this metric is high, it does not narrow down the stock universe enough to give one a nice manageable list. Currently, 713 Russell 3000 companies have a PSR less than 0.2. It will be important to find other measures that will help one find a stock screen that will outperform the overall market. What it does give someone, is a measure that generates companies that will outperform the market by significant amounts. Hopefully, this gets the conversation started.

Dr. J's Good Ideas
675 Followers
I am a an investor who likes sharing great ideas.