Machinery giant Deere (NYSE:DE) has been a stock that I believe Mr. Market has had wrong for a long time. The company is in a highly cyclical industry that is subject to the whims of commodity cycles. I've been very clear in my views that Deere has some pretty serious fundamental issues but to this point, I've been flat out wrong in the direction of the stock. I still believe Deere has lots of problems but I can't deny the price action of late. In this article, with Deere near its highs, I'll take a fresh look and see if it is time to throw in the bear towel and concede defeat. 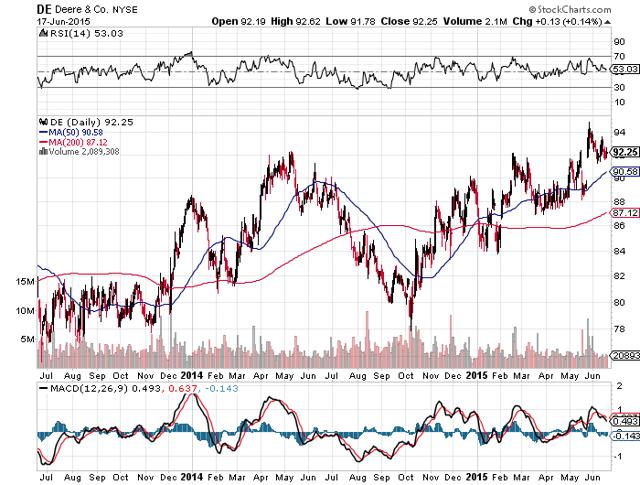 To do this I'll use a DCF-type model you can read more about here. The model uses several inputs including earnings estimates, which I've borrowed from Yahoo!, dividends, which I've set to grow at 6% annually, and a discount rate, which I've set at the 5 year Treasury rate plus a risk premium of 7%.

What's interesting here is that the fair value for Deere is only $66 according to the model, a very long way indeed from the current price of $92. That would obviously imply that DE has lots of downside potential but let's take a fresh look at the fundamentals to see what is going on to cause such a disconnect.

The problem I have with Deere is that the business seems to be in constant decline but the stock price keeps moving higher. That makes no sense and given that Deere is subject to commodity cycles over which it has no control, it doesn't even have much of a moat. Farmers can buy tractors at a lot of places and nothing makes Deere's tractors materially better than those of its competitors. And even though commodity prices in general are pretty soft, Deere shares exhibit great strength. That is a huge disconnect and it is why I think the market has it wrong on Deere.

The company reported earnings late last month and the results were - as we've become accustomed to - terrible. Deere managed to beat earnings but to be honest, when a company reports a 20% decrease in revenue, it really doesn't matter what the rest of the quarter looked like. This is something Deere has been doing for a while now and it is the main reason why I just can't understand why people buy this stock. Deere is going to produce roughly the same amount of revenue this year that it did in 2011; does that sound like a stock you want to own? The business is still in steep decline and the macro factors that can help determine the fate of Deere's revenue - used tractor supply and commodity prices - are very unfavorable right now. In other words, the loss of revenue looks set to continue and in a big way.

After the company reported earnings the stock moved higher as management raised guidance but if you really read the guidance and don't just buy the simple fact it was raised, the picture is quite bleak. Deere still expects total revenue to decline 19% and for net income to come in at a fraction of last year's number. In fact, the guidance offered by Deere would produce the lowest amount of net income since 2010 and yet, the stock trades higher. Why do investors continue to bid the stock up when every single fundamental indicator is yelling at investors to run away?

To its credit, about the only thing Deere is actually getting right is operating margins. The company has a very low cost structure that allows it to squeeze large operating margins from revenue despite gross margins only coming in at around 30%. The way I prefer to assess a company's operating profits is to examine the spread between gross margins and SG&A costs as those two numbers contain all profit dollars and most of the costs to produce the revenue. This gives us a nice picture of operating profit trends and I've charted Deere's numbers below. 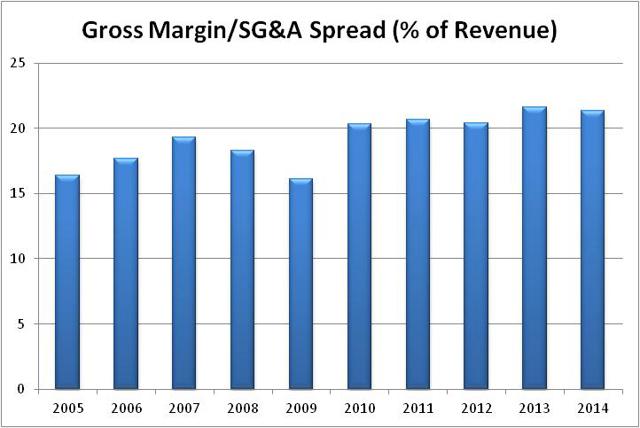 We can see that while the moves higher haven't been huge, over time Deere has managed to steadily increase the spread it collects on its revenue. This has been accomplished through tight expense controls despite the fact that gross margins have never really moved much but in order to grow this spread, you don't necessarily need to improve both pieces. Deere has done a nice job of right sizing its cost structure for its revenue base and it shows here.

Overall, however, there is still nothing to like about Deere. The fact that the business is in seemingly perpetual decline while the stock soars is confusing to say the least. This is a company that has a variety of negative factors against it including massive drops in revenue and profits and yet, investors simply ignore it and move on. The stock is trading for 17.5 times forward earnings despite the fact that it can't even produce numbers close to equal to last year's revenue and profit. This is a stock that should trade for 8 or 10 times earnings until it can get its act together but instead, it is flirting with all-time highs.

I think the short case is pretty compelling here; the fundamentals are beyond terrible and the stock is up against strong resistance where it has been rejected three times in the past. As Deere continues to disappoint investors have to wake up at some point and when they do, the stock should reset a lot lower. Despite the incomprehensible rally that has taken place I still think the right move is to short Deere here; I can't see any possible way the stock can break out to the upside.

Disclosure: I am/we are short DE. I wrote this article myself, and it expresses my own opinions. I am not receiving compensation for it (other than from Seeking Alpha). I have no business relationship with any company whose stock is mentioned in this article.