We are at the edge of a major economic crisis. Our monetary system is the underlying cause of this major crisis. The massive debt bubble created by our monetary system is about to burst. The demonetization of gold and silver has over the years diverted value from these metals to all paper assets (such as bonds) linked to the debt-based monetary system.

The process of the devaluation of gold and silver, started by the demonetization of gold and silver, is about to reverse at a greater speed than ever before. This is similar to what happened during the late 70s (see my previous article), when the gold and silver price increased significantly. However, what happened in the 70's was just a prelude to this coming rally. The 70's was the end of a cycle, this is likely the end of a major cycle; an end of an era of the debt-based monetary system (dishonest money).

This era of dishonest money has filled the economic world with many promises that will never be fulfilled. There will be a massive flight out of paper promises into the ideal safe haven assets that would offer protection.

The type of assets that people will flee to depends on the extent to which the assets offer protection against the specific crisis. For example, if people are extremely thirsty, then most would likely go for water instead of milk or soft drinks. They would therefore rank water higher than soft drinks or milk. The reason that they would go for water is due to its superior properties for countering the thirst crisis.

In a similar manner, people will run to the assets that have the ideal properties to counter risks and issues brought about by this economic crisis. Most people in the hard-money camp will agree that gold is the asset that people will flee to in this economic crisis, but for some reason, there are those (sometimes respected analysts) that believe that silver is not that safe-haven asset.

I believe that people will (and are) running to gold, not because gold was ordained by some divine providence or something, but because it has those specific properties to offer protection against the crisis - properties given by God. It follows naturally that whatever assets have similar properties will be similarly in big demand as a safe- haven.

What are the properties of gold that offers so much protection against this crisis?

Simplified, it is important to understand that the true nature of this crisis is monetary; therefore, assets that possess monetary properties will be the premier assets. The issue here is not whether gold, silver or other assets are money or not. It is whether they have monetary properties because that is what people will be after.

Good money should be effective as a store of value, a medium of exchange as well as a unit of account. In order for money to be effective in the above it has to have the following properties:

Personally, I prefer silver over gold -- mainly because silver offers better value as a result of it being one of the most undervalued assets today, it is less likely to be confiscated (at least for a while), it is more accessible for now due to its lower price. However, I recommend both. 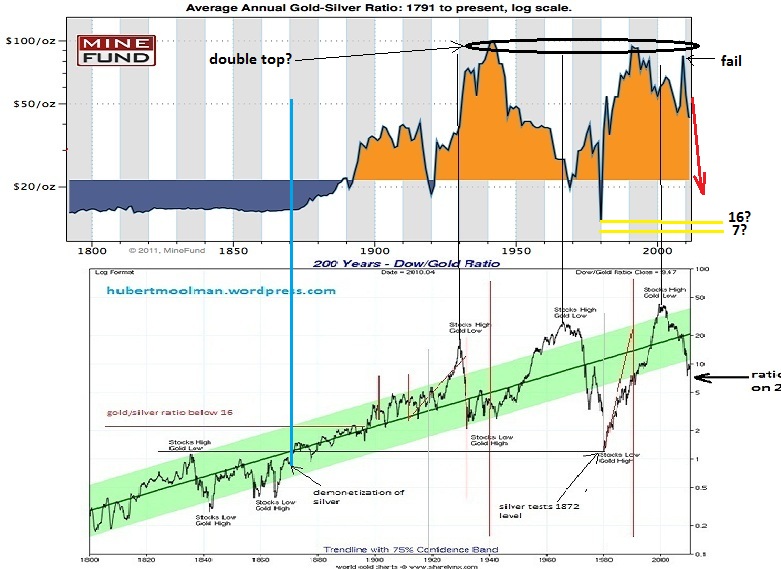 I have lined-up the two charts. I will only point out a few things here. The first thing is the double-top in the gold-silver ratio and the recent failed attempt (at the 80 level) to test the highs. This makes a test of the all-time highs very unlikely and a test of 16 (the bottom between the two tops) very likely (for insight on the gold silver ratio).

The Dow/gold ratio (when high) is in some way a proxy for the extent to which value is diverted from real money to paper assets. The 80 years before the blue line, silver and gold were generally still money. The gold-silver ratio was reasonably stable and lower than 20 and the Dow-gold ratio was at lower levels.

This trend has been reversing since about 1999 and it is likely that the speed of the reversal will soon intensify. Notice how the Dow-gold ratio tested the 1 level in 1980. That level is incidentally the key level at which it broke out of during the 1870s, which is exactly when silver was demonetized. At the same time, in 1980, the gold-silver ratio also made a significant low of about 16. Both ratios were attempting to go back to pre-1870s levels. Was it a co-incidence that both ratios tested the 1870 levels?

After the double-top, it is almost certain that the gold-silver ratio will go back to the 16 level, and even look to touch an extreme level, lower at possibly 7. Technically, based on the extreme highs of the two peaks of the double-top, a ratio of 1:1 is not impossible.

Based on the true fundamentals, it is reasonable to expect things to settle at pre-1870's levels - eventually. That is, that gold and silver will be used as money, with the gold-silver ratio at between a possible 10 and 16.

A good strategy is to keep on accumulating physical silver, especially when there is a healthy pullback in price. Use ETF's like the iShares Silver Trust (SLV), only for trading, not for accumulation.

Disclosure: I have no positions in any stocks mentioned, and no plans to initiate any positions within the next 72 hours. I am long physical silver.

Follow Hubert Moolman and get email alerts
+
Add a comment
Disagree with this article? Submit your own.
To report a factual error in this article, click here.
Your feedback matters to us!