As a buyer, I hate price increases as much as the next consumer. As a business professor for the past 17 years, I have tried to develop (and encourage) economic literacy among future employees, entrepreneurs and voters.

Thus, as a parent about to shell out $200 for Disneyland tickets for two teenagers, last weekend, I had decidedly mixed feelings as I read an article in the Washington Post:

When Walt Disney World opened in an Orlando swamp in 1971, with its penny arcade and marching-band parade down Main Street U.S.A., admission for an adult cost $3.50, about as much then as three gallons of milk. Disney has raised the gate price for the Magic Kingdom 41 times since, nearly doubling it over the past decade.

This year, a ticket inside the "most magical place on Earth" rocketed past $100 for the first time in history. 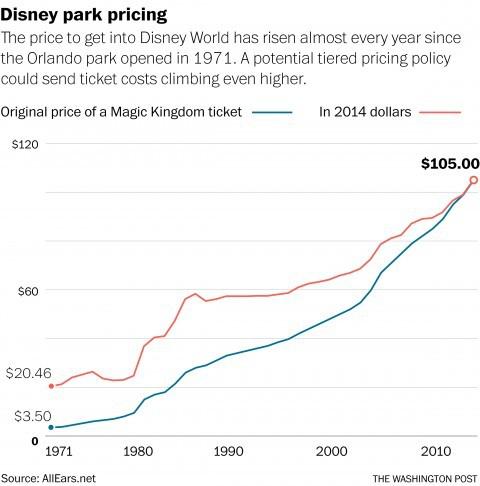 But looking closer at the article, I found two math errors - both obvious to someone of my generation (but perhaps not a 30-ish graduate of U.Florida's j-school). The net result was an apples and oranges comparison that undercut the core premise of the breathless 1,730-word exposé.

As a former newspaper reporter, I thought I'd follow procedure - by writing to the ombudsman to request a correction. Here is the letter that I sent:

I am writing to call attention to the inaccurate (or at best misleading) story and graph in the story on Disneyland.

When Walt Disney World opened in an Orlando swamp in 1971, with its penny arcade and marching-band parade down Main Street U.S.A., admission for an adult cost $3.50, about as much then as three gallons of milk.

This number is highly misleading because today's $99 admission includes unlimited rides, and the 1971 admission included no rides whatsoever. Instead, (when I was a kid) we had books of A- through E-tickets, or just E-tickets -- an additional amount that always totaled more than the amount of admission.

Wikipedia and this local TV station explain it clearly:

In the story's graph, the "price" jumps in 1982 because 1982 was when (according to Wikipedia) admissions included unlimited rides. So the 1982 price is not directly comparable to the 1971-1981 price

This website estimates that the actual net cost in 1971 was $10.25, or almost 3x as much as your newspaper reported:

According to this inflation calculator, that would be $59.88 in today's dollars:†

So yes, Disney pushed through a 65% price increase ($59.88 to $99) in an era when the real price of air travel, computing, TVs and other products fell. (California and Northern Virginia real estate probably increased faster than inflation during this period).

Still, the claim the price went from $3.50 to $99 is inaccurate, since today's readers would assume the admission prices would include unlimited rides (as it has for the past 40+ years).

Joel West
…, California
(I have never worked for Disney Co nor has any member of my family)

† With the June CPI update, the website now says the present value is $60.19. 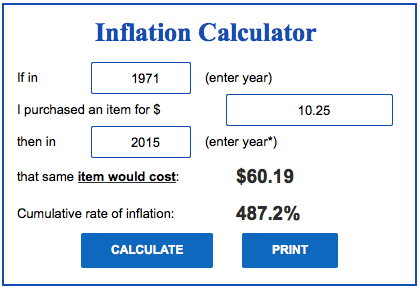 Thanks for taking the time to write. I've forwarded your feedback along to the author of the piece.

As I suspected, when asked to self-police, the reporter neither published a correction (or clarification) or even bothered to reply to my correspondence.

The article overstates the increase in the out-of-pocket price by a factor of three: as someone who went to Disneyland before Disney World opened, I can testify first hand as to how much parents had to feed the mouse to satisfy teens and pre-teens. The 6x increase in the CPI is also not negligible: a gallon of gas that today is $3.50/gallon was 25¢/gallon up until the 1973 Arab Oil Embargo. So the 28x increase is less daunting when there's an 18x correction needed for a mouse-to-mouse comparison.

Now I get that business skills and journalism skills are a rare combination. When in my 20s as a (small-town) reporter, I had two years of college calculus, one semester of upper division math (tensor calculus) and a degree from a prestigious technical university. Despite that, I didn't really understand business or economics until I left journalism - starting my own company in 1987 and getting an education from the school of hard knocks. Still, a cable TV station in Orlando (the 19th largest TV market) managed to get it right - in a story written by their "web content editor."

This is not rocket science, folks. The reality is that the Walt Disney Company (NYSE:DIS) charges all the traffic will bear because it can. Knott's, Six Flags and other amusement park are pale imitations of Uncle Walt's original. It's much more than the proprietary IP, as teens really don't care about mice and princesses - but the imagination and creativity that make the rides more than just spin-until-you-puke physical entertainment. (Universal Studios - with its Wizarding World of Harry Potter - seems to be the only park operator who seems interested in competing in this segment of the market).

Overall, one would think that America's seventh largest newspaper - one with a historic disproportionate policy influence - would be able to hire more qualified business reporters in what is clearly a buyer's market. (Or at least one will derive the story from the facts rather than the other way around.) For example, the WSJ is laying off a veteran business reporter who knows a lot about pharma and has a bachelor's in accounting.

That's why I usually find more insightful and accurate coverage from industry professionals (and part-time columnists) at sites such as Forbes or Seeking Alpha. For example, more than any other news source, I learn the more about the pharma industry from Scott Gottlieb (who brings both FDA and Medicare/Medicaid experience to his MD).

Joel West
3.71K Followers
Dr. Joel West is professor of Innovation & Entrepreneurship at the Keck Graduate Institute, one of the seven Claremont Colleges in Los Angeles County. He was co-editor of the book Open Innovation: Researching a New Paradigm (Oxford, 2006). His consulting focuses on IP strategies and business models for software and Internet service companies. Before KGI, he spent nine years as a faculty member at the San Jose State College of Business, was president and co-founder of Palomar Software and also a columnist for MacWEEK. For more information, see Joel’s website (http://www.joelwest.org/) and the home page for his blogs (http://www.joelwest.org/blogs).