It's time for preferred stock buyers to start paying attention. In anticipation of a September 2015 Fed interest rate hike, the average market price of preferred stock shares fell to $25.03 at the end of June, a drop of $0.62 per share over the last three months. With lower prices come more sub-$25 candidates paying higher returns - the hallmark of a classic buyer's market.

With the second quarter of 2015 behind us, the number of investment grade preferred stocks selling for a market price below $25 is now at 76, up from 39 candidates at the end of Q1.

The similarities between the preferred stock market of 2013 and that of 2015 are hard to miss. In both cases, preferred stock prices started the year in the high-$26 range with pundits forecasting a change in Fed policy to begin increasing the federal funds rate. Also in both cases, those forecasts were largely ignored by preferred stock investors until the summer rolled around and Fed officials started hinting that their September meeting would bring the long-awaited change. With those statements in 2013, preferred stock prices started to fall, dropping below $26 in June of that year, just like last month, as shares cleared their quarterly ex-dividend dates.

This Preferred Stock Market Snapshot chart depicts the preferred stock marketplace at the end of Q2/2015 using two characteristics that are usually high on the list of considerations for risk-averse preferred stock investors - current market price (above and below these securities' $25 par value) and investment risk (as reflected by investment grade versus speculative grade Moody's ratings). 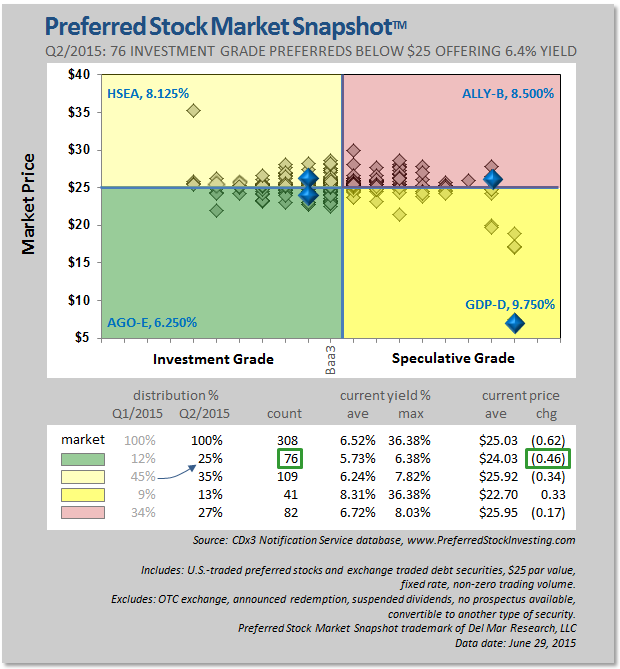 Each diamond represents a preferred stock. The sweet spot of the preferred stock marketplace is depicted in the green lower-left quadrant - investment grade preferreds selling for a market price below their $25 par value.

While there are currently 894 preferred stocks trading on U.S. stock exchanges, 308 meet the criteria listed under the chart. The arrow in the table below the chart points to the migration that we have seen over the last three months. As prices have fallen since the end of Q1, the percentage of the market occupied by investment grade securities that are priced below $25 has increased to 25 percent, up substantially from 12 percent.

The purple diamonds on the above chart identify the four preferred stocks that are offering the maximum current yield from each quadrant (not to be taken as recommendations): AGO-E, HSEA, ALLY-B and GDP-D.

Note that for comparison purposes, I have selected Current Yield (CY) for the Yield column rather than Yield-To-Call (YTC) or Effective Annual Return (EAR) since three of these four securities have exceeded their call dates (YTC and EAR are not able to be calculated in those cases).

Founded in 2003, Assured Guaranty Ltd. (AGO) is a $3.6 billion (market cap) Bermuda-based insurer and reinsurer of a wide variety of debt obligations. The company currently has three income securities trading - AGO-B, AGO-E and AGO-F (originally issued by Financial Security Assurance Holdings, acquired by AGO in 2009) - all of which have been redeemable for several years. This security offers a 6.250 percent annual dividend (coupon), paying $0.39 per share each quarter. AGO-E, presented here in green font, is an Exchange-Traded Debt Security (ETDs). ETDs are very similar to preferred stocks and are often labeled as such, but they are actually bonds that trade on the stock exchange (rather than the bond market). ETDs offer cumulative dividends and are recorded on the company's books as debt rather than equity. As bonds, ETDs are generally seen as having less investment risk than the same company's preferred stocks (see "Preferred Stock Investors: 'Exchange Traded Debt Securities' Offer Same Reward, Lower Risk", March 20, 2012). Of the 76 investment grade securities that are currently trading below their $25 par values, AGO-E is offering the highest current yield at 6.48 percent, closing at $24.13 on June 29.

HSEA is a trust preferred stock introduced by Britain's largest bank, HSBC Holdings PLC (HSBC), at 8.125 percent in April 2008 and has been callable since April 15, 2013. Note that HSEA offers Qualified Dividend Income (QDI) to individual investors (but not to corporate investors since HSBC is a foreign company). As a TRUPS, HSEA provides cumulative dividends but today's buyers should be sure to read the prospectus of this security since the issuer, at their option and at any time, is able to convert these cumulative HSEA shares into non-cumulative "dollar preference shares." Today's buyers may also have to find a way to overlook the $1.92 billion fine that HSBC was required to pay in late-2012 for providing illegal banking services to the world's drug cartels (see "Bleak day for British banking as Libor arrests follow record fine for HSBC", The Guardian, December 11, 2012) and the bank's role in the LIBOR manipulation scandal more recently, the settlement to which the bank may be reneging on (see "U.S. May Revoke Settlement Agreements in Currency-Rigging Probes", Bloomberg, March 17, 2015). Today's $26.08 market price exposes buyers to a $1.08 capital loss in the event of a redemption of HSEA shares.

ALLY-B is a traditional preferred stock introduced in March 2011 at 8.50 percent by Ally Financial (ALLY). To help avoid some confusion, even though the trading symbol is denoted as "-B" and is the only preferred stock currently offered by the company, the prospectus description refers to this security as "Series A," a rare disconnect between the symbol assigned by the NYSE and the description provided by the company. Ally was originally founded in 1919 as GMAC, specializing in financial products to car dealers and buyers. At Caa1, ALLY-B is well into Moody's speculative grade rating scale which explains the 8.02 percent current yield for this security. Of the 41 million shares issued with ALLY-B, the company announced a tender offer for 13 million shares on May 20, 2015. Trading at $26.49, today's buyers are exposed to a $1.49 per share capital loss in the event of a redemption.

GDP-D is a traditional preferred stock offering cumulative dividends and was introduced in August 2013 by Goodrich Petroleum (GDP) at 9.75 percent. Its Caa2 rating is so low that this security is barely hanging onto the low end of the Moody's scale. The early-October, 2014 plunge in global oil prices showed up quickly in the market prices for energy-related securities, especially upstream producers such as Goodrich. The company began selling assets last December in order to meet its cash obligations (see "Goodrich shares slump after company says to explore sale of shale asset"). GDP-D started last October at $25.55 per share but dropped to $6.50 on June 29. The more risk-tolerant among us might consider GDP-D as a capital gain opportunity, assuming that the company is able to survive (or be acquired). Note that, like HSEA, GDP-D is designated as paying Qualified Dividend Income (QDI).

Falling prices is great news for preferred stock buyers, but not so much for those who have treated an income investment using value investing strategies. For the last several years, as prices have been artificially propped up by the Fed's monetary policy, I have issued frequent reminders to use the wholesale Over-The-Counter stock exchange for new purchases (see "Preferred Stock Buyers: Time To Change Tactics For Sub-$25 Purchases", July 14, 2014). Doing so has allowed preferred stock buyers to purchase newly introduced preferred stock shares for sub-$25 wholesale prices; these are the same shares that those who waited to use the retail NYSE paid a much higher price for.

But the advantage of using the OTC will erode as retail prices continue to fall and sub-$25 shares become more widely available; the difference between wholesale OTC prices and retail NYSE prices will diminish substantially.

As history suggested, June 2015 was the month that preferred stock sellers reached their tipping point and started selling their shares in anticipation of a September hike in the federal funds rate (see "Preferred Stock Buyers - History Suggests That June Could Bring Higher Returns For Lower Prices", June 1, 2015). The average market price of the highest quality preferred stocks (cumulative dividends, investment grade ratings, call-protected, etc.) fell $0.33 during June alone, delivering the highest returns for such securities that we have seen since last year to today's buyers.

Preferred Stock Investing
7.03K Followers
Whether you are the kind of investor who sticks with preferred stocks with a CDx3 Compliance Score rated 10 out of 10, or whether your portfolio has room for 9-score-and-lower securities, stay tuned for future articles recapping new IPOs and interesting preferred stock activity that we notice here at the CDx3 Notification Service.

Additional disclosure: The CDx3 Notification Service is my preferred stock email alert and research newsletter service and includes the database of all preferred stocks and Exchange-Traded Debt securities used for this article.