In a little over two months of availability in the June quarter, Apple sold a total of over 4.5 million Apple Watches, according to analysts' estimates. That puts it well ahead of the iPhone launch in 2007, in which Apple (NASDAQ:AAPL) sold just 1 million units in roughly the same time frame. Apple Watch has a bright future, despite what some market research polls might indicate. In its launch quarter, Watch will add about $2 billion in revenue to Apple's top line.

As we enter earnings season, there are many Apple Watch detractors who want to paint the Watch as a failure. Sales estimates for the June quarter vary, but I believe the most reliable comes courtesy of Philip Elmer-DeWitt's round up of analyst's estimates for global Apple Watch sales. The number is less than I expected when I wrote about the Apple Watch pre-order sell out. At the time, I expected Apple to sell about 10 million watches in the June quarter. The Watch has been much more supply constrained than I expected.

However, I still expect Apple to sell in the neighborhood of 30 million units in calendar 2015 as production ramps up and we enter the December quarter. WatchOS2, unveiled at WWDC, should also help to stimulate demand when it arrives sometime this fall.

Apple may not report specific Watch unit sales at its upcoming earnings call next week, but Watch revenue is expected to be booked in the Other Products category. It should produce a noticeable step up in revenue on a quarter over quarter basis. In the March quarter, revenue of the Other Products category was $1.69 billion, so an additional $2 billion will be hard to miss.

This revenue estimate is based on a $450 ASP and amounts to a rough guess of sales distribution between Watch Sport (2/3) and Watch (1/3). At the midpoint of the gross margin guidance Apple offered for the June quarter (39%), gross profit from the Watch will be about $790 million.

Most of the fuel for the latest round of pessimism about the Watch has come from Slice Intelligence. The latest report from Slice has Apple Watch sales collapsing by 90% in the month of June. Daniel Eran Dilger of course immediately wrote a rebuttal to the Slice report.

There could be a lot of problems with the Slice methodology, but even if it represents what it claims to represent - online sales of Watch in the U.S. - these are still significant limitations. Global sales, especially in China, are not accounted for, and neither are sales through Apple retail stores. 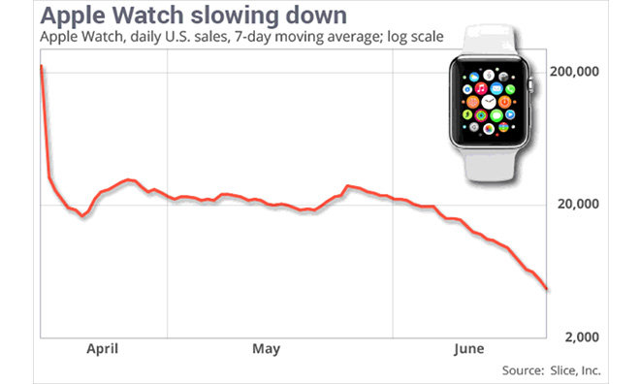 The trend in June is disturbing, but there may be a reasonable explanation. The Apple Watch was never going to be something people would want to buy online. It was too personal, too expensive to impulse buy with a web page click. The Watch is something that has to be tried on. The prospective buyer has to decide between sizes and various colors and materials, both of the Watch itself and the multitude of bands.

Apple understood this, and set up an appointment system so that people could try on the Watch before making a purchase decision as pre-orders began on April 10. Purchases were forced to be online only by supply constraints. This was a very imperfect system compared to the way almost any other watch is purchased, and Apple moved as quickly as possible to remedy the situation. By mid June, Watches were available to be picked up in Apple stores via an online reservation system.

Apple's brick and mortar stores are essential for sales of the Apple Watch. More than for any other Apple product, seeing the Watch, handling it, trying it on, are necessary in order to make a purchase decision. The Slice "research" blows off the most important ingredient in the marketing of the Apple Watch, and probably the most important source of sales in the U.S. going forward.

A month after the Watch started appearing in Apple stores, supplies are still very constrained and many models are hard to come by. I performed an informal survey before writing this article in which I checked in-store availability for three different Watch models, all the stainless steel Watches. At 6 pm local time on July 14, all were available for reservation in my local Apple store. An hour later none of them were.

The idea that consumers are "losing interest" in the Apple Watch is likely a fallacy as self-serving to Apple detractors as the idea that consumers would quickly lose interest in the iPhone 6. Sounds like the same template, doesn't it? This message gets repeated over and over in the tech media with only a slight variation: Apple's products are just fads and consumers will quickly get tired of them.

Apple's products are successful because they offer a compelling value proposition. That value proposition may not at first be recognized. The value of the iPhone touch screen for Web browsing, email, texting and watching video at first didn't seem that compelling.

I'm willing to concede that the value proposition for the Watch is not as self evident as it now is for the iPhone or smartphones in general. I expect that to change as the Watch is endowed with forthcoming generations of operating systems and hardware that allow the Watch to do and be more. The Watch is a form factor that has moved out in front of the technology packed into it. But not for long.