Intel (NASDAQ:INTC) initially wowed investors with a solid EPS beat of $0.55, which pushed the stock up after hours. After digesting the earnings release, it becomes clear that the picture is not so rosy. Intel's operating income was actually down substantially nearly 25% y/y to $2.896 billion, while revenue was down 4.6% y/y to $13.195 billion. The EPS beat was an artifact of an abnormally low income tax provision for the quarter. Intel is no longer a growth story despite the representations of Intel management.

A post on zerohedge.com called this the "Oldest Trick In The Accounting Book." It's not clear how or why Intel was able to lower its provision for taxes line item from the year ago quarter's amount of $1.126 billion to just $277 million for this quarter. Perhaps Intel had overpaid in previous quarters. Whatever the explanation, the impact was to camouflage the steep income decline.

On the conference call, Intel management gave the impression that Data Center Group and Internet of Things Group were both growing robustly. Revenues for the groups were up modestly, 9.7% y/y for DCG, 3.7%f or IoTG. Operating income was flat year over year for both groups.

The lack of operating income growth is a direct consequence of the pressure Intel faces from lower cost and lower power ARM processor options in both the Data Center and IoT. Intel will fight hard to hold on to its market share, probably making it difficult or impossible for ARM processor vendors to turn profits in these categories. Income growth will stall or even decline, but Intel investors can take some comfort in the fact that Intel's competitors are hurting more.

The Client Computing Group, formed from consolidating the PC Client Group (PCCG) and the Mobile and Communications Group beginning this year, continued to be the main culprit behind the operating income decline.

This can be seen in the chart below in which I compare PCCG revenue and operating income in 2014 with CCG for 2015, using Intel's SEC filings. Note that these are comparisons to the original PCCG results as reported in 2014, not the CCG restated results for 2014. 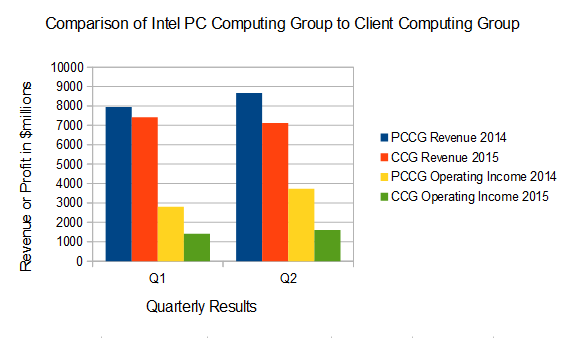 Compared to last year, CCG revenue has been down in both Q1 and Q2. The revenue decline may be attributable to the overall decline in the PC market, but MCG did post negative revenue of $6 million in 2014 Q4, so consolidation with MCG probably hasn't helped revenue.

Another way to look at this is the effect on operating margin of the consolidation with MCG. In the chart below, I show the operating margins for PCCG (2014) and CCG (2015) for the first two quarters of the year: 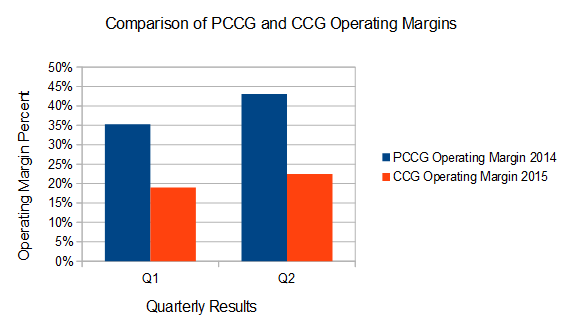 Intel management claimed on the conference call yesterday to be "on track" to meet their goal of $800 million in cost reductions for the mobile business. It's hard to discern any progress from these results. If anything, the results imply that the losses due to mobile devices are only getting worse, with about $2.0 billion being scooped off the top of the combined group's operating income.

Once again, Intel stated in their earnings release that it had sold 10 million tablet processors. It appears however, that this was, once again, only by virtue of contra revenue subsidies. Intel acknowledged on the conference call that contra revenue is still going on, but claimed that SoFIA was helping to reduce that.

The advent of SoFIA (now Atom X3) was supposed to help reduce the impact of contra revenue and trim losses. However, the delay into the first half of 2016 of SoFIA LTE means that Intel's Atom X3 3G offerings are really not competitive except in developing markets. These are not markets in which Intel is going to make a lot of money with the X3.

When asked during Q&A when SoFIA manufacturing would be brought in house, Intel acknowledged that even next year's SoFIA LTE would continue to be manufactured outside, presumably by TSMC (TSM). The in-house version of SoFIA (at 14 nm) won't come on line until 2H 2016.

This puts the premium smartphone market completely out of reach until next year at the earliest. And that market isn't standing still. Apple (AAPL) for instance will be on their 4th generation 64 bit SOC by the fall of 2016, also manufactured on a 14-16 nm Samsung (OTC:SSNLF) or TSMC node.

Intel argues, with some justification, that it still maintains process leadership. This is probably true, but not as much as when Intel was the only company in the world to have FinFET transistors in mass production. The ability of the ARM foundries to implement their own FinFET processes laid to rest the myth that Intel had an insuperable process lead. Intel claims that they will maintain that lead. With the advent of Samsung's 14 nm FinFET process, already in production for its own Exynos processor in the Galaxy S6 that lead shrank appreciably.

Intel also announced that it was going to put off the next major process node, 10 nm, until 2017, thus breaking its historic two-year cycle on process node development. This is a measure of the difficulty of continuing to shrink process sizes using existing lithography techniques. It's also likely a measure of a somewhat slower pace in achieving the yield on 14 nm that typified previous nodes.

Likely, the industry will follow suit. There was probably a collective sigh of relief at Samsung and TSMC when Intel made the announcement. Intel made the decision based on the cost benefit of moving to the new node in 2017. According to Intel, the cost benefit of maintaining the two-year cycle just wasn't going to be there for 10 nm. Going slow also allows Intel to absorb more losses in mobile, giving it more time to make the contra revenue strategy work.

As one analyst pointed out during Q&A, Intel has probably lost the opportunity to jump out ahead (or even further ahead) of the rest of the industry on 10 nm. While Samsung and TSMC would have been hard pressed to make 10 nm in 2016, 2017 is probably well within their comfort zone. Intel's process leadership will only diminish as a result of its decision on 10 nm.

Intel Has Become a Short Opportunity

As of the Q1 earnings report, I was still willing to give Intel management the benefit of the doubt on their mobile strategy and the consolidation of PCCG and MCG. I wrote:

It's still hard for me to believe that any American corporate management could be so obtuse as to think that the elementary subterfuge of a reorganization could work to conceal losses. So I'm still inclined to give Intel the benefit of the doubt and assume that mobile losses will be brought under control rather than merely disguised.

That clearly hasn't happened, and I'm through giving Intel management the benefit of the doubt. They really are that obtuse. They should be removed. Intel is desperately in need of regime change.

Intel's response to the mobile device revolution and the dominance of that revolution by ARM processors is analogous to the response of BlackBerry (BBRY) to the introduction of Apple's iPhone. Intel keeps insisting that people really want Intel Architecture (x64) in their mobile devices, just as BlackBerry kept insisting the people really want physical keyboards on their smartphones.

BlackBerry's dominance of the market at the time (2007-2010) kept them from seeing the future, just as Intel's dominance of the PC market has kept it from seeing the future. Just as BlackBerry could have benefited from a fresh outlook back in 2010, when there was still an opportunity to address the competitive challenge posed by iPhone, Intel could benefit from a fresh outlook now.

Failing that, Intel has become a short opportunity. The ingredients are all there. A management out of touch with reality. A company that is shrinking rather than growing and doesn't understand why. A base of investor/fans clinging to an image of Intel from its glory days. Intel has become the BlackBerry (circa 2010) of semiconductors.