If you see a year-over-year decline in real household net worth, you are just into, or about to be into, an NBER-designated recession.

That's been true in the U.S. since the late 60s (click for source): 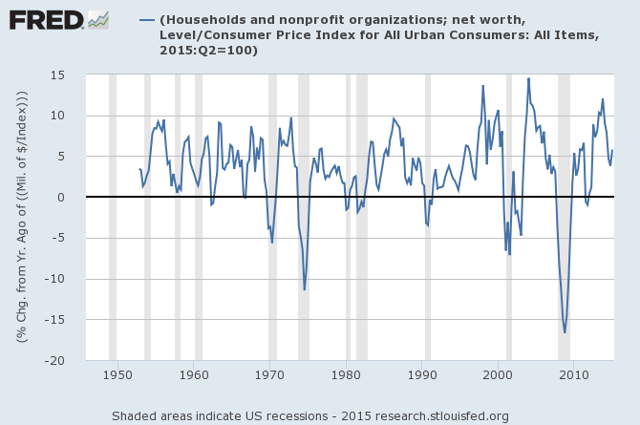 Every time this measure went negative, a recession ensued -- with one exception: Q3 2011. It's eight for seven over the last half century. Change the criterion, "YoY decline greater than 1%," and it's seven for seven. Yes, that's a small sample size, but...

If you'd followed this indicator as an S&P 500 investor, you would have gotten out of the market on release of the March 6, 2008 Fed Z.1 release (which showed a 3.2% YoY decline in real household net worth as of Q4 2007), avoiding a 50% market decline over the next twelve months.

This has me thinking like a monetarist, but with a very different definition of the "money stock" (or the utterly incoherent term, "money 'supply'"): Real Household Net Worth (inherently including the net worth of all firms, which are ultimately owned by households).

When the quantity of money declines (absent a matching runup in velocity), spending declines. So production and employment decline. It's a fairly simple and straightforward (behavioral) economic story: When people have less money, they spend less. Big surprise. (Pace the monetarists, the proportion of that money that's stuffed in mattresses is rather immaterial to how much they choose to spend.)

• Runups and declines in existing-asset markets. (This will raise eyebrows, including/especially among MMTers...) When the financial and real-estate markets goes up, household net worth increases, with no change in household liabilities. Again, this is ab nihilo "money creation," caused purely by animal spirits, people's changed beliefs about the value of (and future output from) existing assets. Ditto when markets decline. Money is destroyed.

• Inflation. (This rather turns monetarism on its head. Bear with me.) When price inflation is high, real household net worth grows more slowly/declines more rapidly. And vice versa.

Big stocks of household debt (relative to household net worth and/or income) -- high household leverage -- can for obvious reasons make household net worth more volatile in both directions. This explain's Steve Keen's important findings that high private debt levels -- and especially rapid changes (and changes in changes) in those debt levels -- are at least predictors, and arguably causes, of booms and busts. (If we posit them as a cause, that is again an economic effect and explanation we're propounding, though it's founded on solid accounting.)

This leads me back to Roger Farmer's important question: did the declining stock market (Granger-)cause The Big Whatever, '07-'09?

I'd say no. The decline in real household net worth was the proximate cause. That decline was rooted (at least initially) mostly in the real-estate meltdown. The stock-market decline joined the declining-animal-spirits party, and definitely contributed. Then add the wildly leveraged financial sector (ultimately owned by households!), with all its shenanigans and mis-priced securities, amplifying the whole thing right onto household balance sheets.

Looking at the graph above, we're in no danger (that we can see) of an immediate recession. If recent days' stock-market declines continue, though, concern may be in order. The big problem, of course, is that we don't get the household net worth measure for three and a half months after the end of a quarter. For now, I'm anxiously awaiting the September 18 release of the Fed's Q2 Z.1 report, in particular its estimate of household net worth as of June 30th.