It is a bit early to call this past week's action a "crash" or to state that the market is in the midst of a crash, but it is also always wise to plan ahead for various possible future scenarios. From a value investor's standpoint, a crash equals opportunity. The last few years since the 2009 financial crisis may have been a bit rough for value investors. While the rising tide of the market over the last 6 years has inevitably raised all boats, those who focus solely on a Graham-esque value strategy may have been left in the dust, as growth stocks have been the been doing the heavy lifting.

Bull runs of this nature are difficult for a value investor to stomach. He likely invested in the 2009 crash, enjoyed the gains until he sold out at what seemed a fair valuation, and subsequently watched agitatedly while the overall market continued to appreciate. He has likely either converted to mostly cash or focused on commodities, energy, and possibly retail stocks, which have lagged behind the rest of the market, sporting low P/Es and P/Bs. Energy and commodities, specifically, have been absolutely hammered this year, while the Dow finally appears to be leveling off after the 5-year bull run. He follows all of the rules he has picked up from Graham, Buffett, and gang, yet it appears those around him blindly throwing money at in-vogue stocks like Tesla are the ones celebrating! He has flashbacks to 1999-2001.

But bull markets must come to an end, and like diamonds, cycles are forever. Love him or hate him (I, for one, am not a big fan), Jim Cramer makes some valid points in Real Money when it comes to cycles.

Cramer discusses a strategy in which the investor purchases non-cyclical stocks at low P/Es when a roaring economy may be coming to an end. The safety of a non-cyclical major (secular growth stock), like Procter & Gamble (PG), will appeal to investors as a safety net as the market begins to decline and in-vogue growth stocks lose their luster. This will inevitably raise the price of P&G, and you've beaten them to the punch! Once the P/E for the secular growth stock is high, ditch it and purchase a cyclical. The cyclical's P/E will be high now due to decreased earnings, but those earnings will begin to pick up as the economy begins to boom again.

To add to Cramer's insight, Ray Dalio gives a very informative overview of the "How the Economic Machine Works". He discusses the printing of money by governments and the use of debt/leverage on an individual and macro basis, while providing historical references to illustrate his theory. As more money is printed and interest rates remain low, borrowing and spending will increase until inflation and GDP growth hit government targets. At that point, rates are raised, money printing slows, and spending decreases as the government tries to keep the economy in balance.

Armed with this information, where are we in the cycle today? While not perfect, Sam Stovall's chart (borrowed from StockCharts) in his Standard & Poor's Sector Investing shows a relatively accurate representation of the typical relationship between a market cycle and an economic cycle. 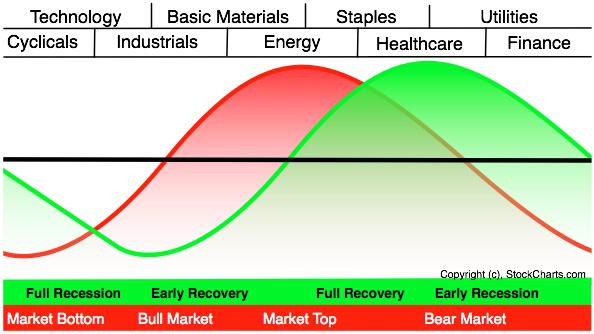 The market cycle appears to be in the mid-to-late stages of a bull market - possibly at a market top - and, according to the above chart, the economic cycle should be showing signs of growth, approaching a full recovery. While economies worldwide seem to be plugging along, it is doubtful many would label our current state as a boom or full recovery. However, with the amount of money printing and quantitative easing governments have partaken in over the previous few years, it is difficult to imagine this sluggish growth will continue indefinitely. At some point, that cheap money will trickle down through the many economic layers and reach the main street businesses, it was ultimately meant to benefit. Consequently, it is also hard to imagine energy and commodities can stay below their respective costs of production indefinitely as businesses spend more into a strong economy, raising demand for oil, copper, etc. As previously mentioned, an astute value investor has likely transitioned to basic materials and energy, and has endured a beating in the process.

This beating may be coming to an end, and the value investor's endurance may begin to pay off. The laws of supply and demand shall eventually prevail! - as they have done throughout history - and as economies throughout the world strengthen, commodity and energy demand should increase in turn. His bets on low-P/B, out-of-favor sectors may come to fruition in the short-to-mid term. Look for commodities to continue their volatile movements. When commodities markets turn, they turn violently, and if you are not in before the move, significant opportunity may be lost.

Commodity and energy stocks simply cannot stay this low forever. As the market peaks and begins a downward trend, commodity and energy stocks will have already bottomed, leaving little room for further depreciation. The strongest of companies will adjust to the new pricing environment and ride out the low prices. Look for modestly leveraged companies whose debt, if any, is manageable.

The best-of-breed companies in these out of favor sectors offer big potential value as they begin to be perceived as safe havens. The BHP Billitons, the Chevrons, and even the Teck Resources of the world will survive the downturn and come back stronger when the world economies further strengthen and lesser companies cease to exist. Play the cycle!

Disclosure: I am/we are long TCK. I wrote this article myself, and it expresses my own opinions. I am not receiving compensation for it. I have no business relationship with any company whose stock is mentioned in this article.