This article is first in a series that provides an ongoing analysis of the changes made to Mason Hawkins' US stock portfolio on a quarterly basis. It is based on Hawkins' regulatory 13F Form filed on 08/14/2015.

Mason Hawkins is a value investor with a focus on finding strong businesses (solid balance sheet) with good people (capable management team) at deeply discounted prices (margin-of-safety). Concentrated high-conviction stakes with holding periods that stretch out to an average of five years is the common theme with all his portfolios. The flagship Longleaf Partners Fund has generated cumulative returns of 1821% over the 28 years since inception compared to 1235% return for the S&P 500 over the same period: 1.44% annual alpha over that long a time-period squarely points to the fund's superiority.

This quarter, Hawkins' US long portfolio decreased 6.17% from $15.93B to $14.95B. The number of holdings in the portfolio decreased from 30 to 28: a small stake in Bank of New York Mellon and a very small position in Mondelez were disposed of this quarter. The top three holdings are at 29.70% while the top five holdings are at 42.48% of the US long assets. The largest holding by far is Level 3 Communications which has been in the portfolio since 2003 and now accounts for 14.76% of the US long portfolio.

Southeastern is best known for its investor friendly attributes. The characteristics that make the fund family distinct are elaborated in Chapter 10 of David Swensen's (Yale Endowment) book "Unconventional Success: A Fundamental Approach to Personal Investment".

Mondelez International (MDLZ): MDLZ has been in the portfolio since Q4 2012. It was spun-off from Kraft on October 1, 2012 and Hawkins established the position soon after. The original stake was a huge ~35M share position at a cost-basis of around $26. The stake was sold down to 30.6M shares as of Q3 2014. Last quarter, the position was sold down to 1.2M shares at prices between $34.34 and $37.59. The remaining minutely small stake was eliminated this quarter. The stock currently trades at $42.20.

Note: California Resources Corp is a recent spinoff from Occidental Petroleum that started trading in December 2014.

Chesapeake Energy (CHK): CHK is a fairly large 4.52% of the US long portfolio stake. It is a very long-term position first purchased in 2006. The original stake was built up to a huge ~87M share position (~13% of the business) by 2011 at a cost-basis in the 30s. Since then, the position was sold down to the current stake of just over 60M shares. The bulk of the selling happened in 2013 in the mid-20s price-range. Last quarter saw a ~13% reduction at prices between $13.50 and $21.26 and this quarter saw a ~6% further trimming. The stock currently trades at $6.33. Hawkins realized long-term capital losses from this position.

Note 2: Longleaf had a previous roundtrip with CNHI. A small stake purchased in 2012 was disposed of by Q2 2014.

Consol Energy (CNX): CNX is a top-five stake at 6.51% of the 13F portfolio. The original position is from 2012 when ~25M shares were purchased in the low-30s. Last two quarters have seen a stake doubling at prices between $27 and $42. This quarter saw a marginal reduction. The stock currently trades at $12.18.

Note: Hawkins controls ~20% of the business.

Note 2: At the Invest for Kids conference in November 2014, Hawkins presented Level 3 as his investment idea and put a value of $61 per share. The stock was trading at around $46 at the time.

Note: Longleaf controls ~8% of the business.

Everest Re Group (RE), FedEx Corporation (FDX), Franklin Resources (BEN), Graham Holdings (GHC), McDonald's Corporation (MCD), and Murphy Oil Corporation (MUR: These positions were reduced marginally (less than 10% reduction each) this quarter. As the activities were minor, they do not indicate a shift in bias.

Note: Hawkins has significantly large ownership stakes in the following businesses: 7.2% of Everest RE, 13.8% of Graham Holdings, and 8.7% of Murphy Oil.

Northern Oil & Gas (NOG): NOG is a minutely small 0.04% position. It was established last quarter but was reduced by close to two-thirds this quarter. The sizing is too small to indicate any bias.

Dream Works Animation (DWA): DWA is a medium-sized 2.90% portfolio stake first purchased in Q3 2014 at prices between $20 and $25. The original stake was more than tripled over the last two quarters at prices between $18.57 and $27.27. This quarter also saw a marginal increase. The stock currently trades at $19.75.

Note: Hawkins controls ~21% of the business.

Note: Hawkins controls ~14% of the business.

Google Inc. (GOOG) (GOOGL) and Wynn Resorts (WYNN): These are fairly large stakes established last quarter and increased significantly this quarter. GOOG is a 4.71% position purchased at prices between $492 and $575 while WYNN is a 4.69% stake established at prices between $94 and $159. GOOG and WYNN currently trade at $629 and $74.29 respectively. GOOG was increased by ~48% and WYNN by ~56% this quarter.

Triangle Petroleum Corp. (OTC:TPLM): TPLM is a minutely small 0.34% of the portfolio position established last quarter and increased by ~78% this quarter at prices between $4.22 and $6.18. The stock currently trades at $3.

Note 1: Hawkins controls ~7% of the business.

Note 2: Chemtura's CEO Craig Rogerson commented in June that compared to making a large acquisition, it is more likely for the business to get sold.

Diamond Offshore (DO) and HollyFrontier (HFC): These are small positions (less than 1% of the portfolio each) purchased last quarter and left untouched this quarter.

The spreadsheet below highlights changes to Hawkins' US stock holdings in Q2 2015: 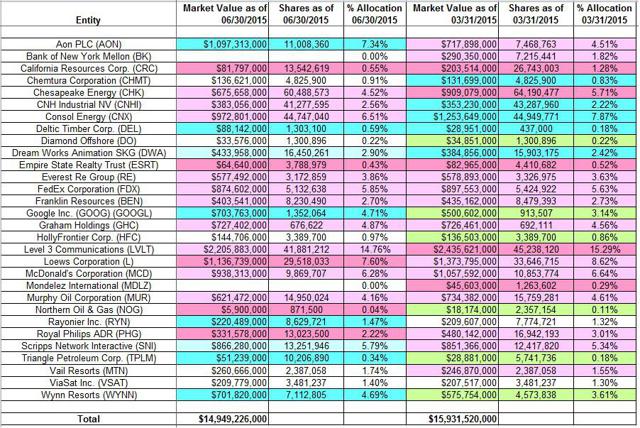 John Vincent
21.4K Followers
Focused on cloning strategies by analyzing 13F reports of a curated set of around fifty super-investors and generating Absolute Returns thru exploiting inefficiency, volatility, and momentum.