Utilities are often thought of as a "bond substitute". They have fairly steady earnings and usually have regulatory support to keep them healthy. Investors often think of utility dividends as a revenue source comparable to a bond's interest payment. Ever since 2008's financial crisis, utility valuations have been influenced by the artificially low interest rate environment the Fed created. Since the returns available from bonds have been so terrible, investors have naturally moved to utility stocks as a way to increase their income. As the Fed discusses the possibility of higher rates, investors should think about the implications for their utility holdings.

You can really see how interest rates have impacted utility stocks (as measured by the Philadelphia Utility Index (UTY) since 2014 in the following chart. 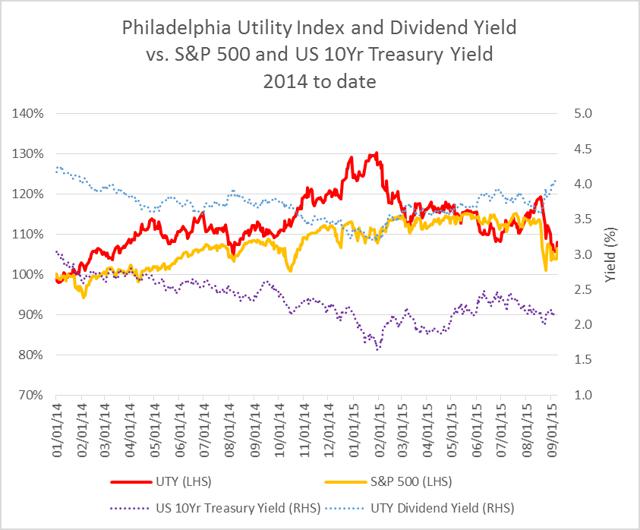 In 2014, while interest rates were falling, all stocks were basically rising (as shown by the S&P 500), but the utilities seemed to be receiving an added boost. Utilities peaked early this year, and since then, as Treasury yields have risen, they have taken a fall much greater than the rest of the market. A large amount of the utility drop is likely from investors anticipating a Fed rate increase and trying to get out before a big fall.

Expanding this chart to the turn of the century provides additional observations. 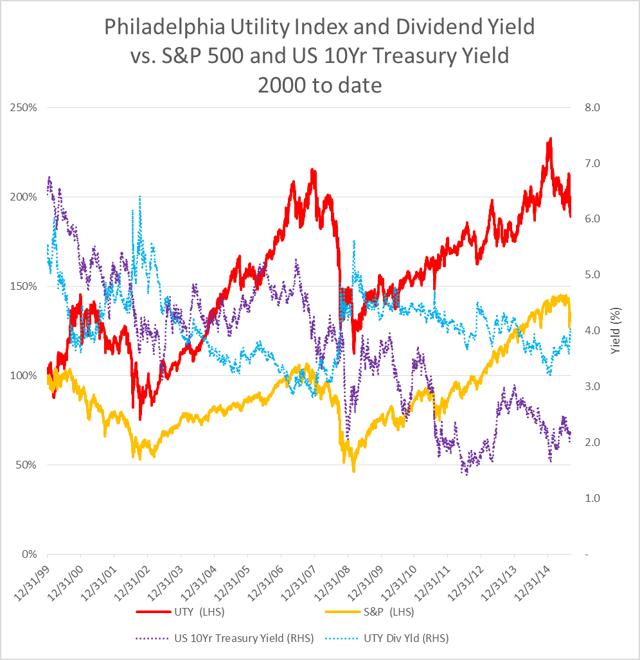 First off, you can see that utility dividend yields were lower than the 10-year treasury essentially until late 2002. At that point Enron, the California Electricity Crisis, and unwise investments by many players in the industry, finally took its toll, and utility values crashed. The yield on the 10-year treasury was actually falling because of the recession, but utilities performed terribly even with their "safe haven" status. Then over the next few years, as 10-year Treasury rates rose, utilities actually performed well. Utility dividend yields again were below 10-year Treasury until the 2008 financial crisis.

The next thing to look at is the rise in the 10-year rate in 2013. There was a sizable initial drop when interest rates bounced off their lows, but the UTY stabilized before the upward move in rates was complete. Also, UTY components Exelon (EXC) and FirstEnergy (FE) were going through dividend cuts at this time, which may have had a bigger impact on the group's underperformance than the rise of the 10-year.

The next chart shows the ratio of the UTY's dividend yield to the 10-year Treasury. Since the turn of the century, utility yields have been about 1.2x the 10-year Treasury. Today's ratio is about 1.9x, which is more than one standard deviation above the average over the past fifteen years. 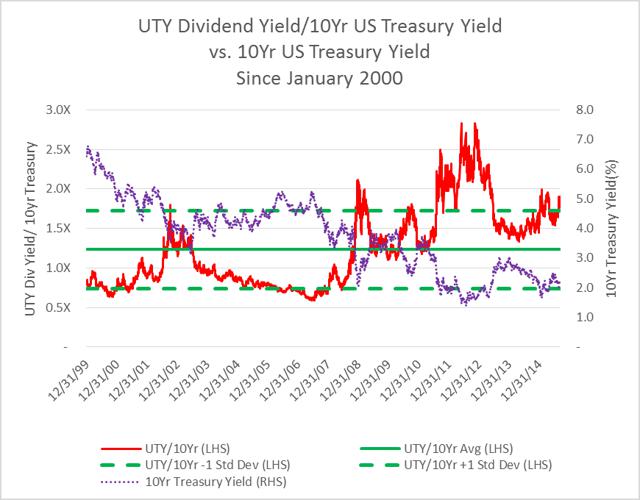 The above chart basically says that utilities are cheap today relative to the 10-year Treasury. You could also argue that the historical average ratio between utility yields and the 10-year is actually artificially high because of industry issues early in the century, making today's ratio look even further cheaper compared to the "true" average.

An alternative way to look at this data is to take the spread between utility dividend yields and the 10-year. This still basically leads to the same conclusion that utilities are cheap against Treasuries on a yield basis. 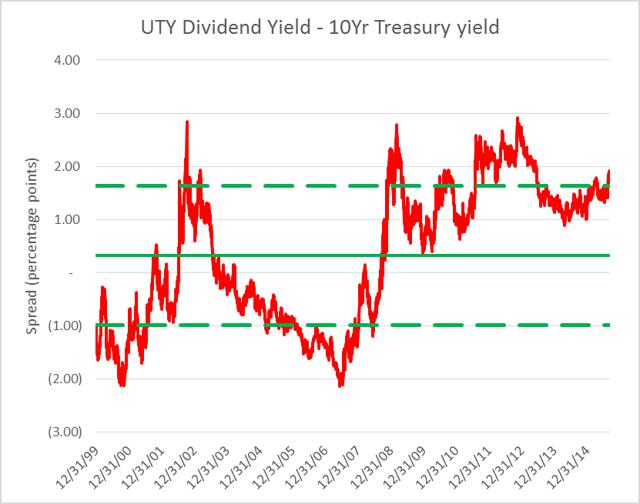 So if we just limited the analysis to the impact of interest rates, utility investors wouldn't have much to worry about. Treasury rates are still so low that there will be plenty of investors looking for a way to get higher income with relative safety. Utility yields have such a cushion that as 10-year rates increase, the spread would likely just shrink from the higher Treasuries. If utility yields were to increase, it would just keep spreads at today's extreme levels.

Of course utilities trade on more than just dividends, and another big driver for valuations is earnings. 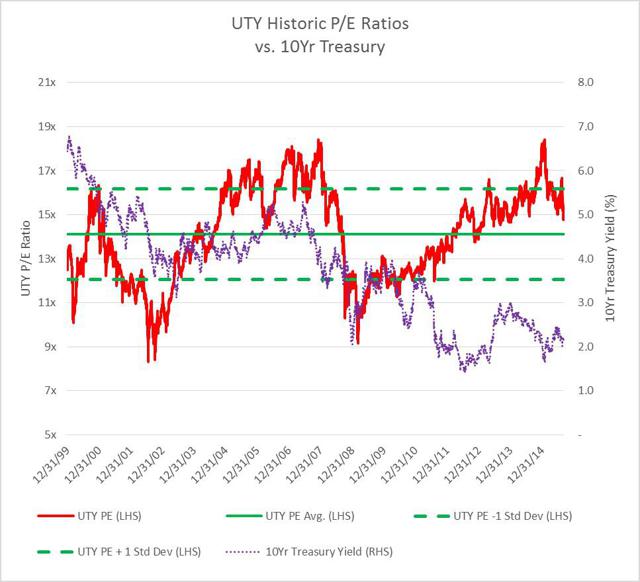 On this basis things don't look as good for the utility group, but it isn't a disaster waiting to happen. P/E ratios have come in a lot since they reached their peak at 18x earlier this year, but the current utility P/E of 14.8x is still above its 14.1x average over the last 15 years. If you look at the middle of the last decade, Treasury yields were 200-300bp greater than they are today, and utility P/E ratios were equal to or greater than today's levels. So there is precedent for earnings valuations to be at today's levels in an interest rate environment higher than today's. This chart seems to imply that the drop in utilities this year has just been a preemptive move by the market, and if a Fed rate increase leads to higher interest rates, utilities have already made the majority of their adjustment.

The post-Enron period was mentioned earlier in this article, and that is an event that could have artificially skewed the average P/E of the group below its "true" level. Of course, other unique things have happened in the past that could artificially move the average higher. For example, in the time period right before the Financial crisis, competitive power generation had a very positive outlook. It looked like these assets were only going to rise in value. Shale gas did a number on that prediction, but you could argue that the unique situation inflated the historical group average. (And maybe utilities with competitive assets are entering another period with increasing values. See here for more on that possibility.) Since there are reasons to adjust the average utility P/E up or down to get a "true" number, this article just uses the 14.1x based on the historic values.

Another thing to note from chart 5 is that during the rising rate period of 2003-2004, when utilities made a substantial upward run, P/E ratios started much lower than today's levels. This should wipe out any hope that a rise in rates today would come with an increase in utility stocks similar to 2003-2004. That was really a unique situation that doesn't currently apply.

This year's move from an 18x P/E to a 14.8x P/E means about an 18% drop in utility stocks. If the P/E were to fall to the 14.1x historic average, this would require a further drop of 4.7%. If the group were to really get hit hard, and P/E ratios went to 13x, then the group would have to drop 12% from today's level. If utility P/E ratios started going much lower, you would expect value investors to start moving into the space and prevent a freefall.

Of course, when thinking of P/E ratios we also need to think about how the group compares to the market in general. The following chart shows the P/E of utilities compared to the P/E of the S&P 500 over time. 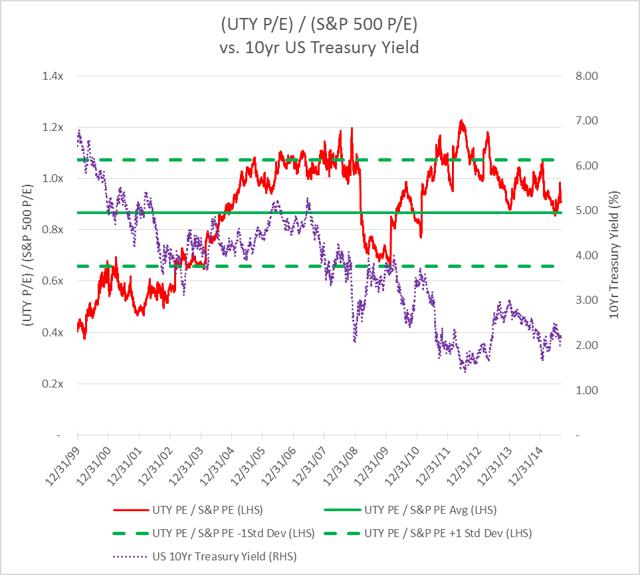 Based on this chart we again have a situation where utilities are trading a little rich compared to historical averages, but not outrageously so. Treasury yields have been more than 200bp higher than today's level with utility P/E ratios compared to the S&P even higher than today. There could be some downward pressure on utilities based on this metric, especially if P/E ratios in the S&P 500 contract, but there is no reason to think things will go back to the way they were at the turn of the century.

One last area that will be mentioned in this note is the impact of higher rates on utility earnings. Regulators set utility rates based on an allowed return on equity. As interest rates have been falling, these allowed ROEs have been falling as well. 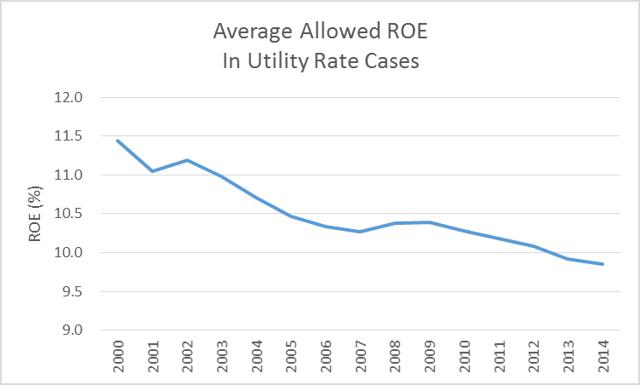 A Fed increase in rates should slow down this drop in utility ROEs, and help support utility earnings in the future. So a rate increase is not all bad news for utility investors.

While a rise in interest rates is not a good thing for owners of utility stocks, a tightening by the Fed in the near future should not lead to a disaster in these names. Right now it seems that low interest rates have increased demand for utilities by attracting investors looking for yield. As these investors have come into the space they have driven up P/E ratios in the sector, and investors focused on this valuation metric have likely stayed away. As rates rise, the balance between these two forces should gradually shift. But rates are starting at such a low level that utility yields will still be attractive to people looking to juice up the income in their portfolio, so there shouldn't be a mad rush out from dividend-focused investors.

The Philadelphia Utility Index has already fallen almost 18% off of its peak earlier this year. Utility P/E valuations were extremely high at that time, and it is likely the drop was in anticipation of interest rates falling later this year. Utilities would have to fall about 5% to bring their P/E back to this century's average of about 14.1x, and they would only have to fall 12% to get down to 13x. If valuations start reaching these lower levels, then value investors would likely start moving back into utilities.

The other thing to remember is that a rate increase is not all bad news for utilities. Higher rates should be beneficial in utility rate cases, allowing them to earn higher returns.

So, even with a Fed increase, interest rates are likely to remain low and income investors will still want to own utilities for the added income. If too many income-driven investors leave and utilities go down by more than 12%, earnings valuations should start to look cheap, and it would put a floor under these names. Also, higher rates should help utilities in their rate cases, benefiting future earnings. So while you should expect a decline from the utility group if rates go up, it shouldn't be a giant one.

I am making the assumption that an increase in rates by the Fed will lead to a general increase in all Treasury rates. In theory, there are scenarios where you could say a rate increase at the Fed might lead to lower rates elsewhere in the financial world. (Maybe the Fed's increase signals increased confidence in America's economy, and money floods into US Treasuries lowering rates.) I'm not going to get in any type of complicated repercussions from a Fed increase. This analysis makes the simple assumption that if the Fed increases rates, Treasury rates will also increase.

Historic utility performance was based on the Philadelphia Utility Index. The current components of the index are:

Robert Howard, CFA
408 Followers
Rob Howard is Co-Manager at Boiling Point Resources. Rob has extensive background in the utility industry working at Baltimore Gas and Electric for over seven years. While there he spent time in Distribution Engineering, Demand Side Management, and Rates and Regulation. This hands on experience has given him a deep understanding of industry issues. After his industry experience Rob moved to the investments business, where he has been following utilities since 2002. Rob has a BS in Engineering and a BA in Economics from Swarthmore College. He has an MBA in Finance from The University of Texas. He is also a CFA charterholder.