After Saudi Oil Minister Ali Naimi declared a market share battle late last November, the price of crude was driven lower by a market expecting a glut to develop. Policymakers and markets are closely watching how domestic production responds.

Unfortunately, the EIA does not collect current data on oil production for the lower 48 states and Gulf of Mexico production. The weekly numbers come from the EIA's Short-Term Energy Outlook (STEO) model (click here, see page 38)

The EIA itself states:

When lower 48 crude oil production is either increasing or decreasing rapidly, the accuracy of the estimate for any particular month is likely to be reduced."

In the week ending March 22nd, the EIA reported that output averaged 9.422 million barrels per day (mmbd). Successive weekly production numbers dropped off, signaling that output had peaked. That likely contributed to the rebound in oil futures prices in the Spring.

But in the week ending May 22nd, the EIA reported a 304 thousand barrels per day (mbd) gain from the prior week. It was actually a revision to February and March estimates all rolled into one week when the EIA had received better data.

EIA's past estimates of U.S. oil production have been based on tax information and other production data obtained directly from state agencies. Given the timetable for EIA's data products, much of that information is lagged and incomplete at the time of publication. For several states, the time from a particular month's originally reported production volume to the time when that same month's reporting could be considered final (i.e., with no revisions or very minimal further revisions) is several months to more than a year."

With the release of the Petroleum Supply Monthly (PSM) on August 31, 2015 for June 2015, the EIA utilized the first survey-based reporting of monthly crude oil production based on an expansion of its survey program earlier this year - its first reporting of June crude oil production. The EIA also began using new survey data from multiple states and regions within the United States, and revised figures previously reported for January through May 2015.

The expanded survey collects monthly oil production data from a sample of operators of oil & natural gas wells in 15 individual states and the federal Gulf of Mexico. The survey-based approach is expected to improve estimates by representing more than 90% of oil production in the United States. Revised survey-based crude oil production estimates will not be provided in the latest PSM for Oklahoma and West Virginia in the expanded survey, because the EIA has not completed validation of the new estimates for those states. The EIA anticipates revising data for these states in the next few months.)

It may take up to four years to get enough data points (36 months) to assess how accurate the new method is. The survey data will need to be compared to the final data, and there is a one-year lag before the final data are known.

Assuming the new survey data for January through June 2015 are accurate, I assessed the accuracy of the weekly estimates as compared to the monthly survey figures. 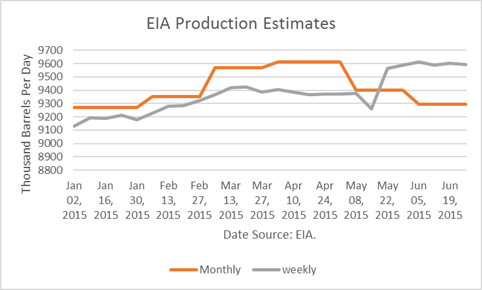 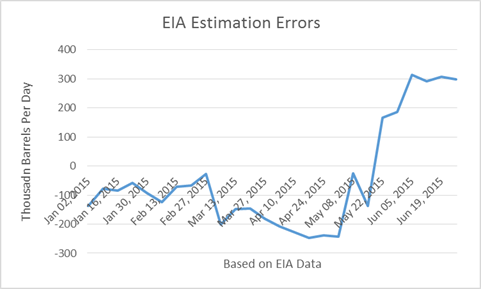 I then calculated the standard error of estimate (SSE):

This is a measurement of the accuracy of a forecast.

The value for January through June 2015 is 187 mbd. If the errors were normally distributed, the 95% confidence interval would be plus or minus 368 mbd. This means that to be 95% confident of the actual number reported being within a range, one would add and subtract 368 mbd to the estimate to get range of where the actual number is.

When Continental Resources (CLR) reported its second-quarter earnings, the company revised its guidance for production through year-end. It increased its estimated output gain versus 2014 from 19% to 23%. It had previously predicted a growth of 16-20%. These estimates show that the company has a good handle on what it can do.

Its prediction going forward is that production at year-end will be running 5-7% lower than the second-quarter average (see here).

Applying this decline rate to the newly estimated EIA monthly production estimates for the second quarter yields an estimate of 8.8-9.0 mmbd at year-end.

Market participants should not give much weight to the weekly production estimates from July to now, or going forward, due to the huge estimation errors.

Assuming the EIA's new monthly estimates for the second quarter are accurate, and using CLR's projected decline rate, which may not be accurate for the industry overall, production is likely to be in the 8.8-9.0 mmbd range at year-end.