The shares of one of my largest short positions (~3%), Exact Sciences, crashed by more than 46% yesterday to close at $9.98 after the U.S. Preventative Services Task Force's Colorectal Cancer Screening Draft Recommendation listed Exact's sole product, Cologuard, a poop-in-a-bucket screening test, as an "Alternative Test" rather than a recommended one, and said numerous damning things such as:

I haven't written about Exact Sciences prior to now because it isn't a fraud/scam or doing nefarious things like so many of the stocks I've written about on Seeking Alpha (see Chris DeMuth's summary of my calls on WRLD, LRN, LL, IOC, DDD and UNIS). Exact has a real product that addresses a very serious problem, the low screening rate for colorectal cancer, the second-leading U.S. cancer killer. Nevertheless, I felt (and still feel) that it's a great short because the test has significant drawbacks that will severely limit its adoption and, in light of this, the valuation is absurd.

While I've never published an article about it before now, I did pitch this stock as my favorite short at the Robin Hood Investors Conference a year ago when it was at $24.22 (click here to see my slide presentation). In light of the 59% drop in the stock since then, it might appear to have been an easy short, but it was anything but. I first shorted it at $14.22 in April 2014 and watched it soar over the subsequent 15 months to a peak in late June of $32.85. This was extremely painful, but I was confident in my analysis and didn't cover a single share - in fact, I added to the position on a number of occasions, most recently just a couple of weeks ago at $19.57 - so it's nice to see my analysis (and stubbornness) pay off.

Why I Shorted More

Now I have a high-class problem: what to do when an investment works? While it can be dangerous adding to a short position that's already fallen a lot, it can also be highly profitable if the stock continues to plunge, as my experience with Lumber Liquidators demonstrates.

The only rational way to think about this is to pretend like I never had a position and was looking at this stock for the first time today. In the case of Exact Sciences, I fail to see how a "single product" diagnostic company, whose test just got body slammed by a highly influential group, could be worth anything close to its current market cap of nearly $1 billion.

I expect that the USPSTF report, which could hardly have been more damning, will cause what little demand there is for the test to plunge (what physician is going to prescribe an "Alternative Test" when far cheaper, established "Recommended Screening Tests" are available?) and many good salespeople to flee (one friend, who knows many Exact salespeople, tells me that the sales force is in a state of chaos, hardly surprising since most of their options are now underwater). As a result, I think the company is likely to miss analysts' revenue estimates by a country mile. Specifically, Canaccord and Wedbush, in their latest reports, predict 2016 revenues of $112 million and $113 million, respectively, which I think is laughable.

In Q2, Exact's revenues were $8.1 million, which analysts expect rose to $12.6 million in the just-ended Q3. I have no view on whether Exact will meet this number when it reports earnings at the end of this month, but I have a strong opinion that the company has almost no chance of meeting analysts' consensus going forward revenue estimates of $18.2 million in Q4 and $139.8 million next year. In fact, I think Q3 may well prove to be the peak and that the company's revenues will be well less than half what analysts are currently forecasting.

If I'm right about a massive revenue miss, this, by itself, will crush the stock - but in addition, I think it will be difficult for Exact to reduce the enormous cost structure it's built up in anticipation of Cologuard's launch. As this chart shows, the company has been burning an average of $37 million over each of the last three quarters:

Quarterly Free Cash Flow Over the Past Three Years 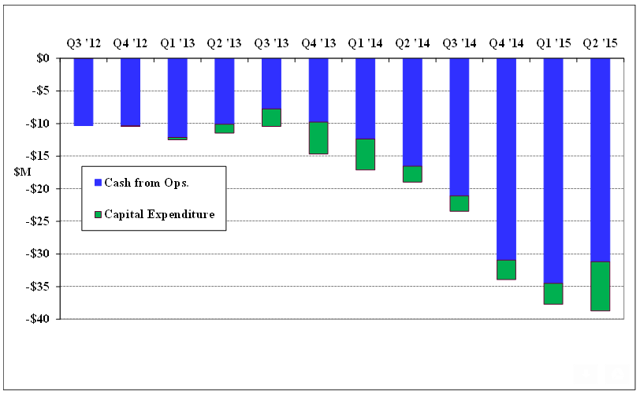 Assuming Exact burned a similar amount in Q3, then it has roughly $350 million in net cash remaining (nearly $4/share, thanks to a very well-timed secondary offering in July at $25.50), which gives the company some breathing room. But investors who think this cash provides much downside protection for the stock are mistaken, in my opinion, because it will be needed to cover the company's large ongoing losses and thus will never be returned to investors.

Further adding to Exact's potential problems are two agreements with the state of Wisconsin and the city of Madison. Earlier this year, the company struck a deal with the Wisconsin Economic Development Corporation in which Exact will receive $9 million in tax credits, but only "by investing $26,264,000 in capital expenditures in Wisconsin and creating 758 new full-time positions - with an average wage of $24.47 per hour - in the state by December 31, 2020." Additionally, Exact is on the verge of signing an agreement with the city of Madison whereby the company would receive a $12 million grant to build its new headquarters in a downtown development. In exchange, however, Mayor Paul Soglin notes that "Exact Sciences will provide financial guarantees to bring at least 400 jobs to the headquarters facility and repay the city if those jobs are not created or if the jobs are relocated from the facility in the future." These agreements will make it very expensive for Exact to downsize, should that be necessary.

As Exact reports the dismal sales and enormous losses I expect over the next year and the stock continues to collapse, I think analysts will eventually throw in the towel, just as they did with Lumber Liquidators. For now, though, they're in denial: of the three reports I read Monday, by the analysts at Jefferies, Canaccord and Wedbush, not one downgraded the stock and they generally said positive things such as:

Tuesday morning, the Canaccord analysts issued a new report in which they took down their numbers, but reiterated their BUY recommendation and wrote: "With EXAS' stock down ~45% following the news, but with EXAS owning a great test across a large sales force with strong commercialization intact, and Medicare unaffected (~60% of payors), we think the risk/reward is to the upside today."

I am grateful to these analysts for propping up the stock enough for me to add to my short position above $11 Tuesday. (Hat tip to the two analysts who've consistently been spot-on: Dr. Cathy Reese at Empire Asset Management and Bryan Brokmeier at Maxim Group).

My Price Target is $3

I think Exact's stock will trade down over the next year to a slight premium to cash (which I estimate will be about $2.35/share a year from now), which would put the stock around $3, a very nice return on my short from current levels.

Whitney Tilson
7.47K Followers
Whitney Tilson is the founder and CEO of Empire Financial Research, which aims to provide advice, commentary and in-depth research and analysis to help people around the world become better investors. In the year prior to launching Empire, he founded and ran Kase Learning, through which he taught a range of investing seminars around the world and hosted two conferences dedicated solely to short selling. Mr. Tilson founded and, for nearly two decades, ran Kase Capital Management, which managed three value-oriented hedge funds and two mutual funds. Mr. Tilson has co-authored two books, The Art of Value Investing: How the World's Best Investors Beat the Market (2013) and More Mortgage Meltdown: 6 Ways to Profit in These Bad Times (2009), was one of the authors of Poor Charlie’s Almanack, the definitive book on Berkshire Hathaway Vice Chairman Charlie Munger, and has written for Forbes, the Financial Times, Kiplinger’s, the Motley Fool and TheStreet.com. He was featured in two 60 Minutes segments in December 2008 about the housing crisis (which won an Emmy) and in March 2015 about Lumber Liquidators. He served for two years on the Board of Directors of Cutter & Buck, which designs and markets upscale sportswear, until the company was sold in early 2007. Mr. Tilson received an MBA with High Distinction from the Harvard Business School, where he was elected a Baker Scholar (top 5% of class), and graduated magnacumlaude from Harvard College, with a bachelor’s degree in Government. Mr. Tilson is an avid mountaineer – he has climbed Mt. Kilimanjaro, Mt. Blanc, the Matterhorn and the Eiger, and is currently training to climb the Nose of El Capitan. He also regularly competes in obstacle course races and is the two-time champion and all-time record holder in the 50+ age group at the 24-hour World’s Toughest Mudder, having completed 75 miles and nearly 300 obstacles in 2016. Mr. Tilson spent much of his childhood in Tanzania and Nicaragua (his parents are both educators, were among the first couples to meet and marry in the Peace Corps, and have retired in Kenya). Consequently, Mr. Tilson is involved with a number of charities focused on education reform and Africa. For his philanthropic work, he received the 2008 John C. Whitehead Social Enterprise Award from the Harvard Business School Club of Greater New York. He was a member (and, for two years, served as Chairman) of the Manhattan chapter of the Young Presidents’ Organization. Mr. Tilson lives in Manhattan with his wife of 26 years and their three daughters.

Disclosure: I am/we are short EXAS. I wrote this article myself, and it expresses my own opinions. I am not receiving compensation for it. I have no business relationship with any company whose stock is mentioned in this article.