The idea that global population growth will perpetually drive increasing demand for food, natural resources, real estate, consumer goods, and global trade is a common theme. This idea of ever greater demand drives most investors thinking and actions. The premise the world currently operates under is that demand (consumption) will grow driven by population increases coupled with wage increases and be magnified by access to credit. The resultant growth will allow rapidly growing debt to be serviced / paid by even more rapidly growing global trade. But actually, this is mostly wrong now...and eventually entirely wrong. Why???

However, as can be seen in the chart below, the portion of the population growing has moved from young (rising births) to 65+ populations living longer. This is a death dearth...not a baby boom. 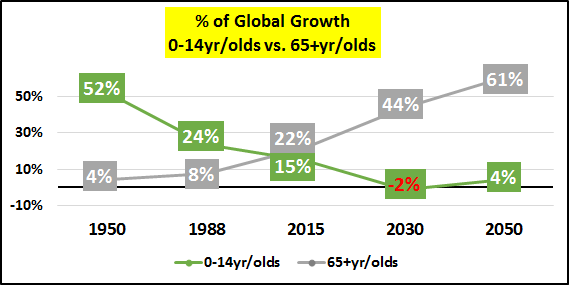 However, like a tsunami rolling across the ocean from its epicenter (industrialism), peak populations will hit different nations at different times and with varying severity. Japan, Germany, Taiwan, China, S. Korea, US and almost all the EU nations are already decades into this process while Brazil and India are midstream and Africa has really only just begun. Chart below highlights huge growth of young up to 2000 and then the opposite from 2000 to 2050.

And critically, of the global population growth of the 0-64yr/old population, only 4 million resides in the relatively wealthy OECD, China, Russia, and Brazil (chart below). The remaining 59 million are in India, Africa, and the rest of the world with barely any income, savings, or availability to credit. The "rest of the world" will provide very little consumption growth relative to the advanced economies of the world. Plus, thanks to massive increases in productivity decreasing jobs creation, their labor (immigration) is no longer necessary or desirable in advanced or advancing nations.

The change of 0-5yr/old global population by decade (below). 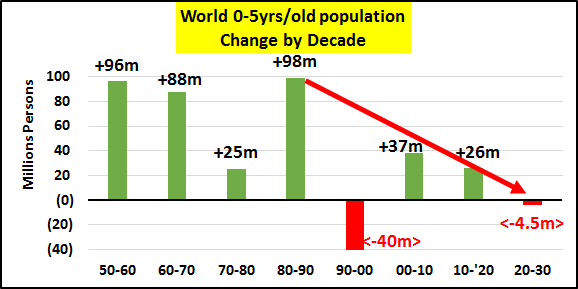 The change in 65+yr/old global population by decade (below). 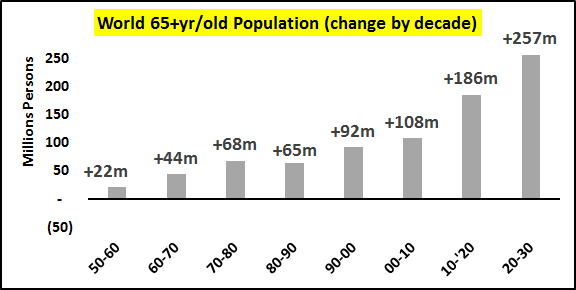 The above two charts in relation to one another (below). 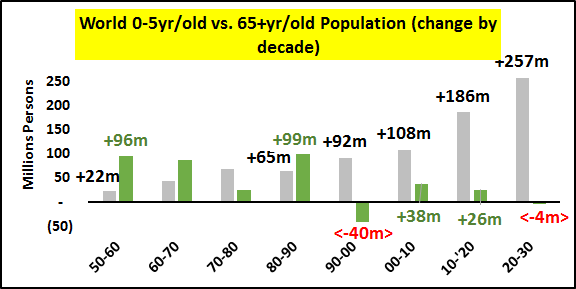 For those curious to look deeper, nation by nation, this link depicts the twelve most populous nations and outlines their demographics from 1980 through 2050 estimated changes...

Among the advanced economies of the OECD, population growth of the young ended long ago.

However, population "growth" continues despite little to no increase in births due to nearly all net increase among the 65+ segment living longer and longer (below).

Many assume that flat to declining numbers of core and younger populations would make employment more easily obtained and give workers the upper hand in wage negotiations. However, thanks to productivity, globalization, innovation, technology, and a hundred more reasons coupled with declining demand globally...the quantity of workers needed and their wages are declining even faster than their population. Record unemployment among European young and core populations (x-Germany) and likewise high rates of "out of labor force" in the US among 25-54yr/olds. The chart below highlights the relatively small decline in population of the 25-54yr/old US population since peaking in 2007 but the far outsized loss of employment among this segment (primarily losing full time jobs). 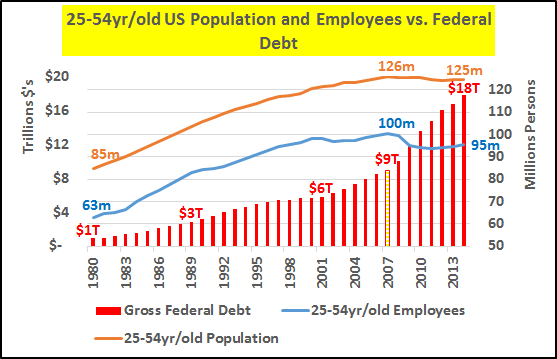 Global young and core population growth is rapidly decelerating and growth of 65+yr/old populations is rapidly increasing. In individual nations (US chart below), as core growth decelerates or goes negative and is replaced by growth among the old, oil consumption declines and economic activity decelerates...this link outlines the phenomenon nation by nation. 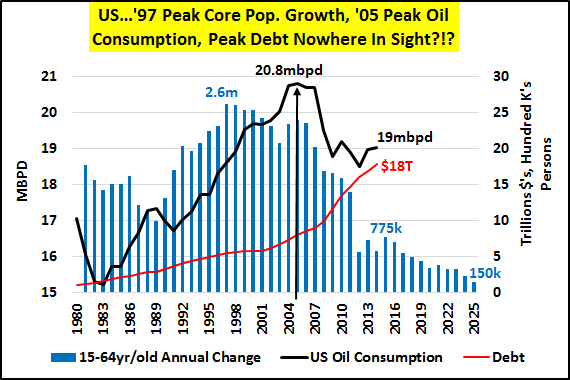 In response to decelerating demand, interest rate cuts and debt are substituted for the decelerating growth (US FFR and debt responding to changing core growth, below). 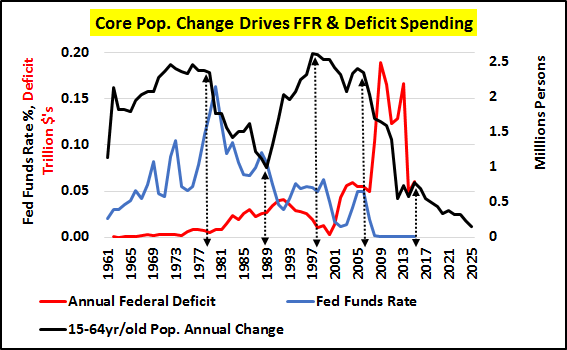 Decelerating global population growth, particularly among the young, highlights why the central bank prescription of ever lower rates incentivizing ever more debt to be serviced by a flat to declining young population is such tragic folly. The Fed has simply (and quite wrongly) been fighting demographic changes to the US core with FFR cuts and resultant debt. The entirely predictable and foreseeable has come to pass, our economic and financial systems based on infinite growth have run into very finite population limits. An acknowledgement of this very simple fact is critical in understanding why central bank policies are not working and will not work.

An entirely new mode of thought (based on the above facts rather than consensus fiction) and action are necessary to cope with the legacy issues we now face. The sooner, the better. Preparing for a world of declining growth of demand / consumption will result in massive overcapacity, "challenges" for the overleveraged, and generally a stable or more likely shrinking pie. As for investors, this changes everything!

*All population data and estimations are via OECD, oil data via EIA.