This comes at the totally wrong time. Trucking had been booming. 2014 had been a banner year. Capacity was squeezed, and rates were rising, so trucking companies went on a buying binge, ordering everything in the book in preparation for red-hot demand in 2015 and more banner years down the road. But then came 2015.

Among businesses, over-ordering and tepid sales caused inventories to rise and the inventory-to-sales ratio to spike to Financial Crisis proportions. And now businesses are trying to bring them down by trimming orders because they're having trouble selling more to the middle class, the over-indebted modern proletariat whose stagnant incomes are being eaten up by skyrocketing costs of housing, healthcare, college, and the like - and they simply can't spend that much on shippable items.

And now this is ricocheting through the industry.

Monday after hours, the largest US truckload carrier, Swift (SWFT), announced earnings. And on Tuesday, it clarified the debacle. It's suffering from indigestion. The high costs from its red-hot capacity increase - average truck count jumped by 831 trucks in the third quarter from a year earlier - are now slamming into swooning freight demand.

Operating revenue declined 1%, which Swift blamed on the disappearing fuel surcharge, though it didn't explain why it is getting away with still charging $109 million in fuel surcharges when diesel prices have plunged to rock bottom.

So it's cutting back. In its previous disclosure, it announced that its average truck count for 2015 would grow by 700-1,100 trucks. Now it cut the growth down to 500-600 trucks, "given that the freight environment is softer than we originally expected, and peak volumes have not yet materialized as in years past," it said.

September is the beginning of the holiday shipping season. Volume should be sharply higher. But it's not happening [read… US Freight Shipments Have Worst September since 2010].

Now it's down to cost cutting and focusing on "improved utilization" of the fleet. So it lowered its outlook for 2015 earnings, "in light of the items discussed" on September 25, 2015, which is when it had issued its original earnings warning. Its shares have plummeted 49.6% from their 52-week high in December.

"Effective immediately we will enter into a zero fleet growth mode," Swift CEO Jerry Moyes told analysts. The company "will not be adding any new equipment," he said, and is considering actually reducing its truck count.

This has already ricocheted to diesel-engine makers: Cummins (CMI) announced its earnings debacle on Tuesday - revenues down 11%, earnings down 5%. It plans to axe 3.7% of its workforce, or about 2,000 folks. It would whittle down its manufacturing capacity and might have to take more aggressive measures, it said. It lowered its outlook further and expects "challenging conditions to persist for some time."

It blamed Brazil and China. In the US, demand for heavy-duty truck engines had been strong, and orders were expected to reach a decade high, as Swift and others had been ordering trucks from truck makers, and they'd been ordering engines from engine makers such as Cummins. But then the third quarter came around; suddenly Cummins' sales of heavy-duty truck engines fell 9% year over year, and orders plunged.

"It's evident now that retail sales [of trucks] and production will be down going forward," explained COO Rich Freeland. Cummins shares, which plunged 8.7% on Tuesday, are down 32.5% from their 52-week high in December.

In this scenario of overcapacity and slack demand, the critical load-to-truck ratio has collapsed to the lowest level in years.

Transportation data provider DAT publishes load-to-truck ratios on a weekly and monthly basis. It calls them "a sensitive, real-time indicator of the balance between spot market demand and capacity." They're a function of the number of loads for every truck posted on DAT Load Boards. And here is the key: "Changes in the ratio often signal impending changes in rates."

Unusually "slack demand" in September - the beginning of shipping season - after "a quiet July and even quieter August," impacted most of the nation, except in the Pacific Northwest, where "fall harvests of apples, potatoes and onions rolled to market in vans as well as reefers," explained Mark Montague, a statistician at DAT.

September looks terrible compared to September in banner-year 2014. It still "looks anemic even when compared to the more typical freight movement of September 2013," Montague said. This slack demand whacked load-to-truck ratios. And that matters: 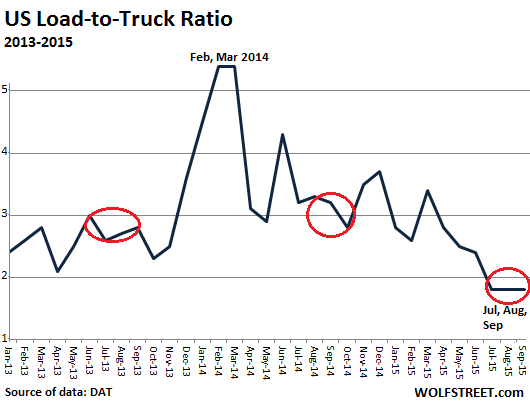 The hump in the chart above in February and March 2014 was caused by the tough winter, which "squeezed truckload capacity in the northern band of U.S. states, and load-to-truck ratios spiked." This caused an immediate increase in spot market rates, and by April, contract rates began to rise. But by December 2014, the party was over. Spot market rates began to fall. Contract rates eventually followed.

So far in October, on a weekly basis, the load-to-truck ratio looks even worse. In the week ending October 24 (published October 27), the ratio dropped to 1.3 loads per truck:

Trucking is a thermometer for the merchandise economy. It doesn't track consumer expenses like rent or college. But it tracks exports and imports, manufacturing, distribution, retail, and other sectors. It tracks a big part of the real economy. And the sudden slowdown in the trucking industry is another wildly flashing signal in our recession watch.

"It's been a rotten year for distressed and defaulted loan paper." That's how S&P Capital IQ starts out its report on leveraged loans. "Rotten" may be a euphemism. The worst since 2008, as "fear has become a strong undercurrent." Read… And Now Defaulted "Leveraged Loans" Go Kaboom.

Wolf Richter
4.01K Followers
Wolf Richter is the publisher of wolfstreet.com, a site focused on business, finance, and money. The site is free. In addition to the many years at wolfstreet.com and its predecessor site, he has 20 years of C-level operations and finance experience.
Follow
3 Comments