The New York Times has broken a story I’m involved with that major U.S. public companies, including Wayfair and via Wayfair, Wal-Mart (I’m sure they will be horrified to learn), were, until the Times reporter called, likely selling toxic, formaldehyde-drenched Chinese-made laminate flooring seven months after the 60 Minutes story aired that has destroyed Lumber Liquidators (LL). Wayfair is my largest short position by far. 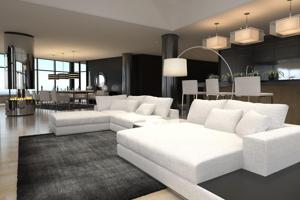 Here are some excerpts from the article below (I’m mentioned a couple of times):

As Lumber Liquidators continues to struggle in the aftermath of a safety crisis over its Chinese-made laminate flooring, a much smaller flooring company has been drawn into the spotlight.

The hedge fund manager who publicly accused Lumber Liquidators of selling wood with dangerous levels of formaldehyde is leveling the same claims against Ark Floors, a California importer of Chinese wood products that are sold all over the United States.

…Test results from five types of Ark laminate show levels of formaldehyde “well above” the emission standards set by the California Air Resources Board, according to Josh Hosen, senior manager of certification programs at HPVA Laboratories, a testing company in Reston, Va. Whitney Tilson, the hedge fund manager who runs Kase Capital Management, hired HPVA to run the same tests on Ark’s products as the lab had done on Lumber Liquidators’ products.

…It is difficult to know exactly where Ark’s laminate was sold and whether the products are still on store shelves in the United States. Mr. Tilson has bet against the stock of the online retailer, Wayfair, which sold the products on its website and through Walmart.com.

…Lumber Liquidators’ stock has dropped more than 70 percent since Mr. Tilson appeared in a March 1 episode of the CBS program “60 Minutes,” which accused the company of selling Chinese-made laminate flooring that contained unsafe amounts of formaldehyde.

The Consumer Product Safety Commission opened an investigation in March, and in May, Lumber Liquidators announced that it would suspend sales of laminate products from China.

But other companies, including Home Depot and Ark, appear to have sold laminate from some of the same Chinese mills that supplied Lumber Liquidators, raising questions about other products for sale in the United States.

“We all believe it’s a pervasive problem. It’s not just a Lumber Liquidators problem,” said Denny Larson, an environmental consultant who works with plaintiffs’ lawyers.

…Shortly after “60 Minutes” broadcast its report on Lumber Liquidators, employees at Ark were told that the company no longer sold laminate to California customers unless it had a CARB-compliant label, three former employees said. Another former employee, Tim Wang, who said he had worked in the sample department of Ark’s California warehouse until July, confirmed that the company sold noncompliant flooring outside of the state.

You may have never heard of Wayfair (NYSE:W), but it aims to be the Diapers.com or Zappos of everything for the home – here’s the description of the company from Yahoo Finance:

Wayfair Inc. engages in the e-commerce business in the United States. It offers approximately seven million home products under various brands. The company’s brands include Wayfair.com that focuses on offering home furnishings and décor from low-to high-end and across various styles; Joss & Main, an online flash sales site; AllModern, an online destination for original design for modern home enthusiasts; DwellStudio, an online design studio for modern, fashion-forward home furnishings; and Birch Lane, a destination for classic style home designs. Wayfair Inc. also sells its products through retail partners. Wayfair Inc. was founded in 2002 and is headquartered in Boston, Massachusetts.

It has grown like wildfire – that’s what willingness to lose a ton of money plus buying a lot of Google keywords will do! – and has TTM revenues of nearly $2 billion. It went public a year ago and now has a nearly $4 billion market cap. It just reported Q3 earnings this morning and had a conference call at 8am.

This isn’t my largest short position because I had an opinion on what Q3 earnings would look like. Rather, it’s primarily because it has one of the worst business models I’ve ever seen. Competing head-to-head vs. Amazon (AMZN), Home Depot (HD), Target (TGT), Williams-Sonoma (WSM), etc. (did I mention AMAZON???), I think the company’s odds of ever reaching breakeven, much less earning a profit, much less earning enough of a profit to justify a nearly $4 billion market cap are close to zero. (Operating income over the last four quarters was -$137 million, 71% higher than the -$80 million in the four quarters before that. The company has $399 million of cash and long-term investments and no debt.)

In addition, this business is so poorly managed and/or spread so thin that they were selling Chinese-made laminate long after everyone in the flooring industry knew (thanks to 60 Minutes) that there were big issues – and potential liabilities – associated with this product so extreme caution was called for.

Just as I did with Lumber Liquidators, I hired a testing company to purchase and test five samples of Ark laminate flooring from Wayfair’s web site. All five failed the California Air Resources Board (CARB2) limit in spectacular fashion (by a factor of 2-5x). In fact, the test results were very similar to those for the three samples of Lumber Liquidators Chinese-made laminate that I had tested more than a year ago.

To be clear, however, I am not claiming that Wayfair is Lumber Liquidators Part 2. Lumber Liquidators was selling ~$140 million annually of Chinese-made laminate flooring before the scandal, whereas Wayfair claims to have “sold just 10 orders since December 2014, including one order through Walmart.com.” Also, Wayfair was smart enough to immediately pull the product once the Times reporter called and made them aware of the potential problem. So the possible liabilities here are much lower – and, I suspect, there was no intent to harm. Unlike Lumber Liquidators, I don’t think Wayfair was deliberately poisoning its own customers to save a few bucks on sourcing costs.

Rather, to me it is compelling evidence of Wayfair’s gross incompetence and/or a business that’s completely out of control. While the company was founded in 2002, it was only rebranded and started pursuing extreme growth in 2011. They are now selling “seven million home products” sourced from over 7,000 suppliers, and grew revenues 77% last quarter – talk about growth run amok! I’ve seen this story so many times by companies trying to justify their insane share prices. It’s a curse because it almost always ends in tears…

Take a look at zulily for one good example that I shorted successfully. The company IPO’d in late 2013, with the stock trading in the mid-$30s. It then briefly soared to over $70 before reality set in and the stock crashed to under $12 before investors got bailed out (sort of) when Liberty Interactive (QVCA) bought zulily for $17.40.

One of my readers wrote to me with another analogy: “I think Wayfair is Overstock.com 2.0. It seems like the exact same business model.”

I will have lots more to say when I present this idea at the Robin Hood Investors Conference this coming Monday afternoon, starting at 3:55pm. If you’d like to attend, there are still tickets available (see: http://investors.robinhood.org) – and it’s for a wonderful charity. I hope to see you there!

PS—If you want to read more on the short case for Wayfair, see the following:

Whitney Tilson
7.48K Followers
Whitney Tilson is the founder and CEO of Empire Financial Research, which aims to provide advice, commentary and in-depth research and analysis to help people around the world become better investors. In the year prior to launching Empire, he founded and ran Kase Learning, through which he taught a range of investing seminars around the world and hosted two conferences dedicated solely to short selling. Mr. Tilson founded and, for nearly two decades, ran Kase Capital Management, which managed three value-oriented hedge funds and two mutual funds. Mr. Tilson has co-authored two books, The Art of Value Investing: How the World's Best Investors Beat the Market (2013) and More Mortgage Meltdown: 6 Ways to Profit in These Bad Times (2009), was one of the authors of Poor Charlie’s Almanack, the definitive book on Berkshire Hathaway Vice Chairman Charlie Munger, and has written for Forbes, the Financial Times, Kiplinger’s, the Motley Fool and TheStreet.com. He was featured in two 60 Minutes segments in December 2008 about the housing crisis (which won an Emmy) and in March 2015 about Lumber Liquidators. He served for two years on the Board of Directors of Cutter & Buck, which designs and markets upscale sportswear, until the company was sold in early 2007. Mr. Tilson received an MBA with High Distinction from the Harvard Business School, where he was elected a Baker Scholar (top 5% of class), and graduated magnacumlaude from Harvard College, with a bachelor’s degree in Government. Mr. Tilson is an avid mountaineer – he has climbed Mt. Kilimanjaro, Mt. Blanc, the Matterhorn and the Eiger, and is currently training to climb the Nose of El Capitan. He also regularly competes in obstacle course races and is the two-time champion and all-time record holder in the 50+ age group at the 24-hour World’s Toughest Mudder, having completed 75 miles and nearly 300 obstacles in 2016. Mr. Tilson spent much of his childhood in Tanzania and Nicaragua (his parents are both educators, were among the first couples to meet and marry in the Peace Corps, and have retired in Kenya). Consequently, Mr. Tilson is involved with a number of charities focused on education reform and Africa. For his philanthropic work, he received the 2008 John C. Whitehead Social Enterprise Award from the Harvard Business School Club of Greater New York. He was a member (and, for two years, served as Chairman) of the Manhattan chapter of the Young Presidents’ Organization. Mr. Tilson lives in Manhattan with his wife of 26 years and their three daughters.
Follow

Disclosure: I am/we are short WAYFAIR. I wrote this article myself, and it expresses my own opinions. I am not receiving compensation for it (other than from Seeking Alpha). I have no business relationship with any company whose stock is mentioned in this article.