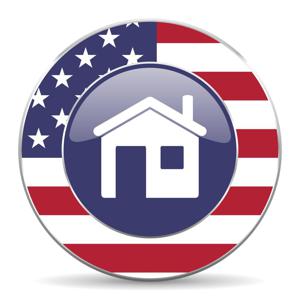 The Capital Spectator's average forecast is near the middle of three estimates based on recent surveys of economists.

Here's a closer look at the numbers, followed by brief definitions of the methodologies behind The Capital Spectator's forecasts that are used to calculate the average estimate: 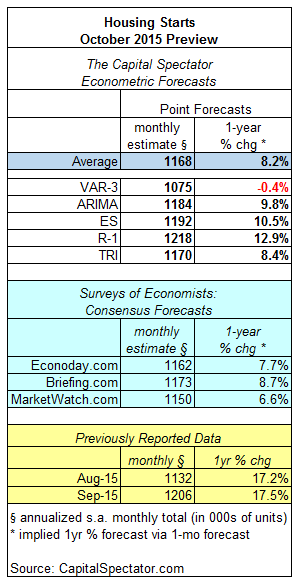 VAR-3: A vector autoregression model that analyzes three economic series to project housing starts: new home sales, newly issued permits for residential construction, and the monthly supply of homes for sale. VAR analyzes the interdependent relationships of these series with housing starts through history. The forecasts are run in R using the "vars" package.

ARIMA: An autoregressive integrated moving average model that analyzes the historical record of housing starts in R via the "forecast" package.

ES: An exponential smoothing model that analyzes the historical record of housing starts in R via the "forecast" package.

TRI: A model that's based on combining point forecasts, along with the upper and lower prediction intervals (at the 95% confidence level), via a technique known as triangular distributions. The basic procedure: 1) run a Monte Carlo simulation on the combined forecasts and generate 1 million data points on each forecast series to estimate a triangular distribution, 2) take random samples from each of the simulated data sets and use the expected value with the highest frequency as the prediction. The forecast combinations are drawn from the following projections: Econoday.com's consensus forecast data and the predictions generated by the models above (VAR-3, ARIMA, ES and R-1). The forecasts are run in R with the "triangle" package.

James Picerno
5.85K Followers
James Picerno is a financial journalist who has been writing about finance and investment theory for more than twenty years. He writes for trade magazines read by financial professionals and financial advisers. Over the years, he’s written for the Wall Street Journal, Barron’s, Bloomberg Markets, Mutual Funds, Modern Maturity, Investment Advisor, Reuters, and his popular finance blog, The CapitalSpectator. Visit: The Capital Spectator (www.capitalspectator.com)