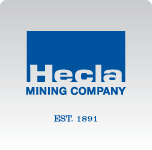 Hecla Mining (NYSE:NYSE:HL), based in Coeur d'Alene, Idaho, with a sister office in Vancouver, is one of the lowest cost producers and largest primary silver miner in the U.S. The company, which has been in existence since 1891, owns the Greens Creek mine in Alaska and the Lucky Friday mine in Idaho. Additionally, the company owns Casa Berardi, a gold mine located in Quebec, Canada. The company is also active on the exploration and development front throughout North America and claims a reserve base of 173 million ounces of silver and 2.1 million ounces of gold.

While Hecla is a pure precious metals play in a sector sitting in the trough of a cycle, true value investors recognize that significant money can be made by patiently investing in "best of breed" companies that are well suited to take advantage as the sector recovers - and Hecla fits this bill.

Hecla Mining was incorporated in Idaho on October 14, 1891 and, subsequently, in the state of Washington on July 12, 1898, according to the company's timeline. In 1904, the company moved its offices from Spokane to Wallace, Idaho, where it remained for the next 80 years. Throughout the next century, Hecla concentrated on mining silver, lead, zinc, and, eventually, gold, while also venturing into the uranium business with the purchase of deposits in Utah. In 1958, Hecla purchased its first shares of the Lucky Friday mine, which is still operating today.

Hecla became listed on the New York Stock Exchange in 1964 after trading for 49 years on the now-defunct American Stock Exchange, which merged with the NYSE in 2008.

In 1967, Hecla began investing in the development of the Lakeshore copper mine in Arizona, but 10 years later, the impact of low copper prices forced the mine to close, setting Hecla back $97 million. Fortuitously, the company was able to pay off its Lakeshore debts in 1979 as a result of the ~$50/ounce price tag for an ounce of silver that culminated from the Hunt brothers cornering of the silver market.

Hecla purchased an approximately 30% interest in the Greens Creek mine in 1987, while expanding into the gold and industrial minerals businesses. The gold mining business is still intact, even with the closure of a number of mines that have been mined out, but the industrial minerals business has since been divested (2001). in 2008, the company purchased the remaining interest in the Greens Creek project from Rio Tinto.

In 2013, Hecla acquired Aurizon Mines Ltd. and became the 100% owner of the Casa Berardi gold mine in Quebec. Throughout the 2000's and 2010's, Hecla continued to increase its reserves, with the 2015 purchase of Revett Mining and its Rock Creek project in Noxon, Montana, the most recent transaction - bringing us to today.

From the company's latest investor presentation, here is map of Hecla's assets: 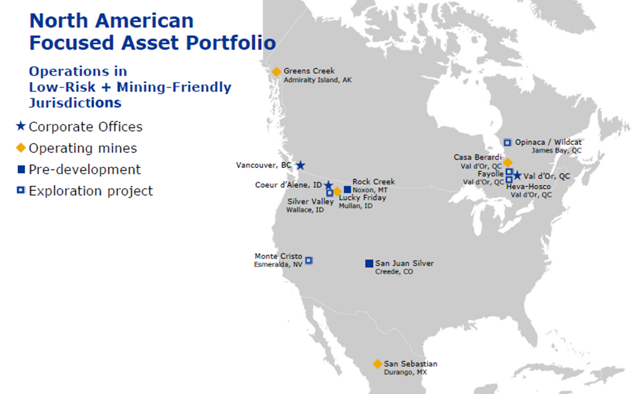 Disclaimer: The results discussed here include the results of Revett, which Hecla acquired on June 15, 2015, for $20.1 million in cash and shares. The results consider Revett's financial performance as if the merger occurred prior to the periods discussed.

The Greens Creek mine accounted for over 50% of the company's revenue and has been the only profitable mine of the first nine months. From the latest 10-Q:

The company carries only $501 million in long term debt, comprised of senior unsecured notes issued in 2013 to fund the purchase of Aurizon, and due on May 1, 2021. The notes, which bear interest of 6.875% due twice per year, can be redeemed early. Prior to May 1, 2016, the notes can be redeemed with a "make whole" premium or after May 2, 2016 without a penalty for the prices defined in the indentures. Up to 35% can be redeemed using the proceeds from an asset sale before May 1, 2016.

The company has $176.5 million in cash and equivalents, which is down from $215 million at the end of December 2014. Cash was spent on additional exploration and development, according to President and CEO, Phil Baker, "to support growth of longer mine lives and more consistent operations." The company also has access to a $100 million credit facility which has not yet been drawn upon.

In this challenging metals environment, the company still managed to kick out $57.6 million in free cash flow over the last four quarters, due mainly to its low cash cost to mine an ounce of silver. This past quarter, however, was an outlier according to Baker. From the most recent conference call:

"At $7.52 per silver ounce, the cash costs after byproduct credits are higher than we've had since I've been at Hecla. We believe this unique to this quarter caused principally by lower byproduct metal prices as well as lower than normal production at the Lucky Friday. This really is a testament to the strength of our operations that our highest cash cost quarter is the lowest for many other companies. With Lucky Friday at full production, I am confident costs will decline."

An overall recovery in the metals sector will act as a double edged sword to improve margins: higher byproduct revenue for zinc and lead will lower cash costs for silver (higher byproduct credits), while higher silver prices will raise the top line. The company anticipates finishing the year with an average cash cost for silver of $6 per ounce on 10.5-11 million ounces produced comprised of 7.7-8.0 million ounces from Greens Creek at $3.75/ounce and 2.8-3.0 million ounces from Lucky Friday at $10.75/ounce. The Greens Creek cash cost numbers take into consideration 59,000 ounces of gold produced. Casa Berardi will pitch in 126,000 ounces of gold at $825/ounce for the year. Even in a down environment, the company still boasts relatively healthy margins. 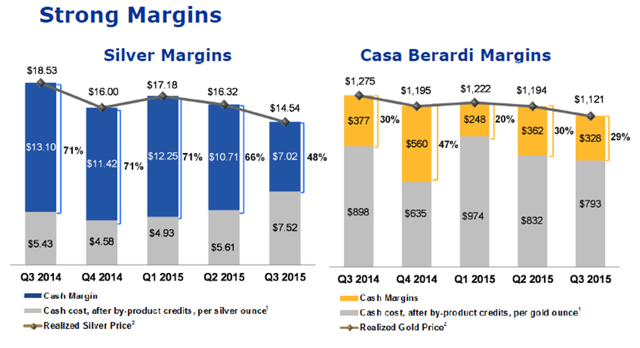 Looking ahead, Hecla anticipates an additional $43 million in free cash flow to be generated over the next 18 months from the San Sebastian mine in Durango, Mexico. The company anticipates mining to commence by the end of 2015.

Hecla's share price has struggled over the course of the year along with the rest of the sector. However, relative to its peers, Hecla has actually performed fairly well: 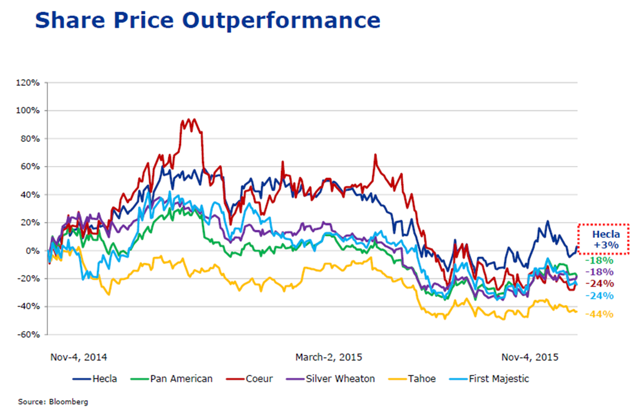 However, as any true value investor knows, a stock price selling for low on a relative basis to its historical price is irrelevant. What matters is the stock's value relative to its intrinsic value. Discounted cash flow modeling can be a valuable tool to assess the intrinsic value of a company, but in the mining industry the future prices of the products are nearly impossible to anticipate over the long term - garbage in, garbage out.

Therefore, I prefer a method of valuing a mining company based on price-to-book value utilizing a reversion to the mean analysis. Book value is generally much less volatile than earnings and mining companies are typically required to reevaluate the carrying value of their assets regularly. While a meticulous analysis of the assets that comprise a company's book value is still recommended, the task is much more straightforward than analyzing the same for companies that carry a number of intangibles or assets.

Comparing current P/B to the company's historical P/B and to the same values of its peers gives a good indication of how the market typically values a company over a period of time, while smoothing out the short term inefficiencies offered by the market. I am comfortable with a 10-year time frame.

The small chart above tells a big story: The entire sector is extremely undervalued compared to historical norms, which is not surprising to the casual follower of the metals markets. Hecla is trading at a P/B of only 27% of its historical P/B norm - by far the lowest of the four companies in the comparison. Assuming reversion to the mean price-to-book value, Hecla, at $1.98, has significant room to run. To eventually return to its 10 year historical level relative to book value, Hecla would need to trade at $7.11/share = 370% upside!

Obviously, to buy into this methodology, one would need to assume that metals prices will recover to historical levels, which may not be a fair assumption considering the all time highs reached by precious metals in the early 2010's. However, Hecla is poised to run on any sign of a recovery in silver and gold.

Assuming gold prices return to $1,300/oz and silver to $19/oz and Hecla is able to maintain its production and cash cost per ounce of each metal - which is a conservative assumption, as zinc and lead prices would likely rise in a sector recovery, as well, bringing in additional revenue to offset the cash costs of mining silver and gold - then Hecla would be spitting out operating cash flow in the $225 million range! Assuming, conservatively, that Hecla maintains a CapEx of around $150 million per year, the company would generate around $75 million in free cash flow per year or, with around 378 million outstanding shares, $0.20 of free cash flow per share. Applying a Price to Free Cash Flow ratio of 15, the share price would reach $3. Again, all inputs into this calculation were very conservative.

The above does not even take into consideration the San Sebastian mine. While operations at the Durango location are scheduled to occur only over a two year period, I like management's move. It recognized an opportunity for cheap cash flow and had the wherewithal to pull the trigger on exploiting the cheap ore. Shareholders appreciate the initiative and prompt action to take advantage of the situation.

The biggest risk, of course, is a further deterioration in the price of precious metals. While this concern is certainly valid, miners have typically underperformed the products that they produce, leaving me to believe that share prices of miners - especially smaller miners - are near a bottom. With the resiliency that Hecla has shown compared to its peers, a further significant drop in share price is unlikely.

Manageable debt; aggressive, yet prudent management; and a low price relative to historical intrinsic value are the makings of a winner. It's a Hec-la buy!