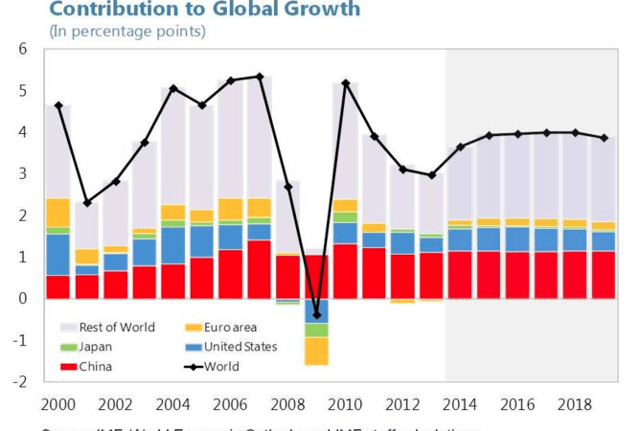 Because of its high growth rates, many people now call China the locomotive of global growth. Especially the International Monetary Fund thinks China contributes more to global growth than any other economy.

"We forecast China to contribute more than before to global output, even though growth is slowing. For exporters, this means China's expanding market will continue to be a great source of future customers," the IMF states.

According to its calculations, China should add around 1 percentage point to world growth (around 4 percent) in the coming years.

However, the argument, like many in economics, is at least semantically flawed. It goes like this: China's share of global GDP was 16.6 percent in 2014. If it grows 10 percent, it will add 1.66 points to the world total of 100, thus contributing 1.66 percentage points to global growth.

But this is only true if one sees all the different countries in the world as one, which some people say the IMF would like to see in the not-too-distant future.

If that was the case, a China growing at 10 percent would really add to 1.66 percentage points to the world total. At the time of this publication, however, there were still 188 different countries on the IMF's members list. 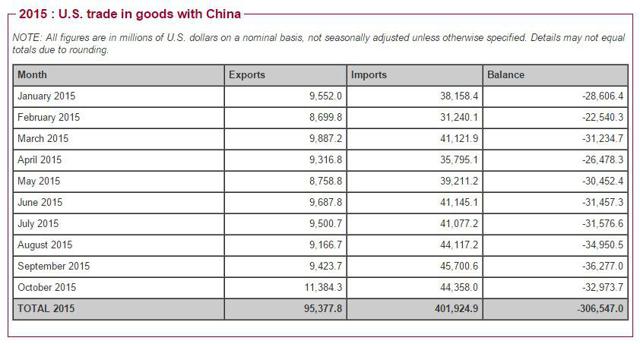 The United States has to deduct its trade deficit with China from its GDP (U.S. Census Bureau)

And China in fact has subtracted growth from most of these countries by having run massive trade surpluses for two decades - close to $600 billion in 2015 alone.

Looking at the world economy as a market where different sovereign nations compete, rather than the world economy as one whole entity, it is difficult to see how China is contributing to rest of the world growth, when it is actually taking away from the growth of most of its trading partners.

Epoch Times
780 Followers
The Epoch Times is an independent voice in print and on the web. We report news responsibly and truthfully so that readers can improve their own lives and increase their understanding and respect for their neighbors next door and around the globe. In our approach and in our content, we uphold universal human values, rights, and freedoms. We are a business that puts our readers’ interests first, in all that we do. Who We Are Epoch Times is a privately held news media company. Our network of local reporters throughout the world uncovers stories that are authentically local, yet also globally relevant. Our independence enables us to report widely and present a diversity of opinions. Our Purpose During a time when the world is changing ever more quickly, people need reliable information to understand events and trends. We strive to make a positive impact on people’s lives by helping all people understand the world and themselves, and to respect and appreciate each other. We report stories and air opinions unavailable elsewhere. A special strength of The Epoch Times is our coverage of China. Today the world is increasingly looking to China, as this troubled giant goes through tremendous changes. Business and political leaders, and also world citizens, want to understand better what is happening there. We are able to provide well-sourced stories that no one else has through the original reporting done by the Chinese-language edition of The Epoch Times.