Let's take a quick trip down memory lane before looking ahead to this year. 2015 was frustrating for both bulls and bears, with the S&P and Dow unable to break out convincingly in either direction. Only the Tech-heavy Nasdaq managed a positive return on a price basis. Here in the U.S., the Russell brought up the rear down over (-4%), while the S&P came in just below the flat line (-0.73%). Add the dividend, and the SPX goes green.

On the last trading day of the year, I joined CNBC's Closing Bell hosted by Bill Griffith and Sara Eisen. Also on set was Mike Santoli, who accurately pointed out that if the SPX had closed positive for 2015, it would have misrepresented the performance of the average stock. With more than 20% of S&P 500 stocks in bear market territory, that message rings true. Earnings were just about flat for the year, so all in, the index performance makes sense.

I'm not making any. Groupthink seems to point to a year that looks a lot like the last one, so expect something we haven't seen yet to throw everyone's game plan for a loop, forcing fund managers to call an audible at the line of scrimmage. The danger with predictions is that we tend to extrapolate recent trends forward. A better tool might be to look at the Assets and Liabilities making up the market's balance sheet.

Jobs - Any discussion of jobs raises the political rhetoric from both sides of the aisle. The left likes to point to the over 60 months of non-farm payroll growth, while the right focuses on the labor participation rate sitting at a near-decade low of 62.5. Like most things in life, the truth probably lies somewhere in the middle. The chart below is a comparison of Job Openings to Continuing Claims. December openings came in at 5.4 million, versus continuing claims at 2.2 million. If the trend continues, it could be good news for investors. 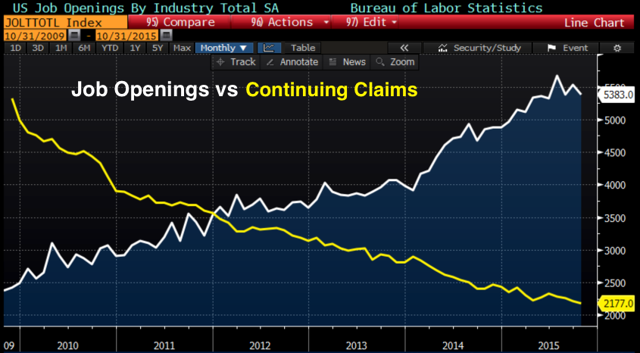 Oil - Oil has been a blessing and a curse, with some like myself calling it a potential Black Swan. Nevertheless, consumers benefit each time they pull up to the pump. The health of the consumer is probably better than we think it is. Spending is likely moving from the cash registers at the mall to online giants like Amazon (NASDAQ:AMZN).

Unfortunately, CEOs continue to pick the low-hanging fruit. However, at some point the game runs its course, and you're forced to re-invest back into the company. Current estimates include more of the same, but for now, I'm keeping earnings growth on the asset side of the balance sheet.

Sector Returns - Not all sectors are struggling. The challenges in the energy complex are well known, but other sectors like Tech, Healthcare and some parts of Consumer Cyclicals still exhibit secular growth. FANG stocks (Facebook (NASDAQ:FB), Amazon, Netflix (NASDAQ:NFLX) and Google (now Alphabet) (NASDAQ:GOOGL) drove most of last year's returns, but have become a very crowded trade.

Admittedly, the noise surrounding healthcare is going to get nasty as we head into an election year. Biotechs with high-priced drugs, like Gilead's (NASDAQ:GILD) $1000 pill, are an easy target for candidates. However, lifesaving treatments end up being far cheaper in the long run.

Rates Are Still Low - It's true that the Fed has launched, but the terminal rate will be much lower than previous cycles. Those stretching for yield in MLPs and junk are re-thinking that strategy and might return to good old fashioned stocks offering total return.

Oil - Like I said earlier, oil has been a blessing and a curse, so it's important to look at the dark side as well. Sixteen percent of the junk bond market is energy stocks, with some concerns like Chesapeake (NYSE:CHK) seeing their debt trade at 25 cents on the dollar. We're seeing the first wave of defaults, so it shouldn't be surprising that some bank CEOs, like Bank of America's (NYSE:BAC) Brian Moynihan, are concerned about the credit profiles of customers living in energy-producing states. It's already hitting state budgets of some like Alaska, where they are considering their first income tax in 35 years.

Increased tensions in Middle East could cause a spike in crude, but sustained higher prices will have to be accompanied by a better supply/demand backdrop.

Dollar - The U.S. dollar is up over 25% in the last 18 months. It's been confined to a range since peaking in early March, but could break out to the upside given the divergent path of world central banks with current Fed policy. Industrials took it on the chin last year. It was rare to be on a conference call without management pointing to the revenue headwinds coming from a strong dollar. 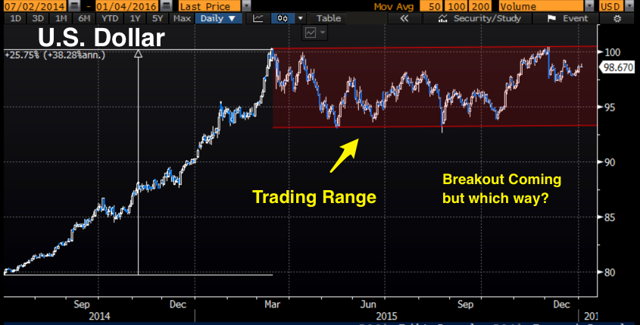 The Fed - While I expect the terminal funds rate to be lower than that in previous cycles, rising rates puts pressure on multiples. With little chance of multiple expansion, the market performance is probably capped by earnings growth.

Geopolitical Chaos - One look around the world would give any investor pause. As I'm writing, headlines are coming across the tape saying Saudi Arabia has severed diplomatic relations with Iran. ISIS continues to dominate the news here in the states, with polls showing that terrorism tops the list of voter concerns.

Add a little insurance to your portfolio. Defense stocks tend to do well post a terror attack, and most candidates running in 2016 support increased military spending.

Self-Indulgent CEOs - I've been a long-time critic of CEOs who fail to live up to their responsibilities to shareholders, and with each year that passes, the problem seems to get worse. The continued use of buybacks to shore up earnings at the expense of R&D and capex seems to be the first choice of Fortune 500 CEOs. Why invest in a new factory or hire new employees when another round of buybacks will goose the earnings sooner, helping management meet stock-based compensation goals.

Kicking off the year

Obviously, there are a lot more factors at play, but those listed above are some of the key themes likely to drive investor returns. Everyone will be looking at the January performance as an indication of what 2016 has in store for U.S. investors. The January indicator is one of those metrics that works right up until the time I use it. My advice is to build your portfolio one stock at a time. The bull market is long in the tooth, and the tide isn't going to lift all boats. Look beyond the headline numbers and focus on those with real top and bottom line growth that aren't totally dependent on buybacks or other financial engineering gimmicks.

David Nelson, CFA
341 Followers
David Nelson, CFA is the Chief Strategist of Belpointe Asset Management. The members of his firm, DC Nelson Asset Management LLC (DC Nelson), recently merged into Belpointe. At Belpointe he will continue to manage his Alpha Select Portfolio. He is a Chartered Financial Analyst (CFA), a designation issued solely by the CFA Institute (formerly the Association for Investment and Research or “AIMR”). Follow on Twitter @davidnelsoncfa Relevant Experience: David founded his own investment firm in October 2000. Prior to forming DC Nelson, David was a portfolio manager at Lehman Brothers’ New York City office, where from 1997-2000, he was responsible for managing the assets of high net worth clients and small institutions. Lehman approached David at Morgan Stanley Dean Witter where, from 1995-1997, he played an active role in management at their flagship New York City office. Previously, he was a Financial Consultant for Merrill Lynch. He is a frequent commentator and guest on Fox News, and Bloomberg TV where he discusses markets, politics and individual securities. David also frequently lectures on the financial markets, including several recent appearances before the American Association of Individual Investors (AAII). David’s investment career follows his well-publicized success in the entertainment industry where he performed with recording artists The Turtles, David Johansen and Nektar.

Disclosure: I am/we are long FB, AMZN, GOOGL. I wrote this article myself, and it expresses my own opinions. I am not receiving compensation for it. I have no business relationship with any company whose stock is mentioned in this article.

Additional disclosure: All charts are created by me in excel or my Bloomberg Terminal