With copper dropping a few pennies and oil plunging to new lows, the logic for dumping Freeport-McMoRan (NYSE:FCX) remains a stretch. What isn't clear is why investors are dumping this stock instead of focusing on oil producers.

About a month ago, my research suggested that a washout moment occurred as the stock collapsed from $12 to $7 in days. The problem with highly-indebted stocks is that equity holders aren't always in control of the short term so regardless of the logic the stock didn't hold.

The market is overly focused on the oil transactions that brought on the high debt position, though what matters is the cash flow from copper. The stock has collapsed to decade lows. Is this the capitulation moment? 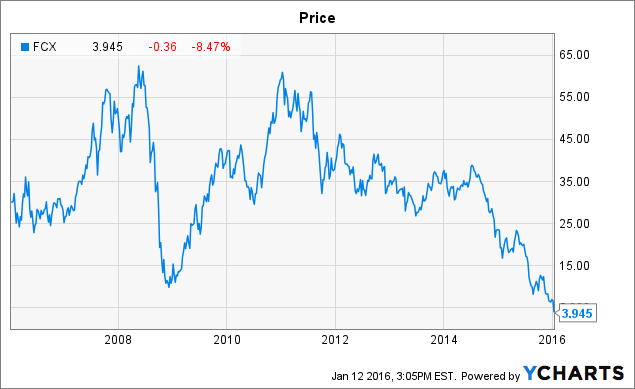 What the market appears to be missing is the cash flow position of Freeport-McMoRan in 2016. The December reduction in capital spending and the suspension of the dividend set the company up for achieving $600 million in free cash flow based on commodity prices at the time. The market, though, appears to have stopped at the discussion requiring $45 Brent crude prices to self fund that business.

As a reminder, the company provided the following targets for reaching $600 million in operating cash flows in excess of capital expenditures:

Remember that this number is based on 2016 revised capital spending of $4.0 billion. The 2017 plan is for a further reduction of roughly $600 million from the oil drilling that will immediately add to the free cash flow levels.

Of course, oil gets all the focus so oil prices bouncing off $30 today is a huge negative for this forecast. The key, though, is that copper has spent the month above $2/lb until the 10th. At this moment, copper trades right around the target level. 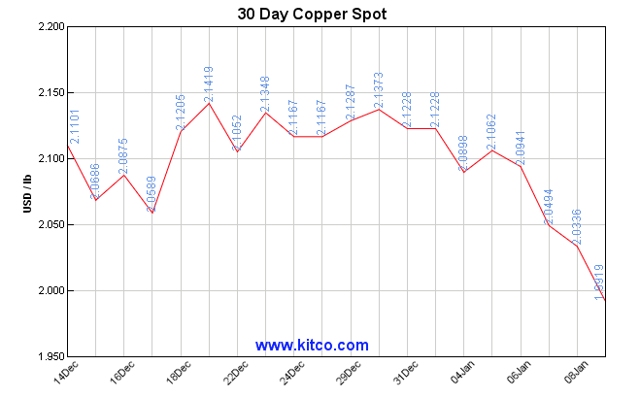 Back in August, prior to more curtailments of high cost copper in the U.S., Freeport-McMoRan provided the following impacts to cash flows from price changes in commodities:

At this point, the market prices on copper are breakeven with the cash flow target. Oil prices have dropped significantly. If Freeport-McMoRan only got current $30/bbl prices, the cash flow estimate would plunge by $420 million. Investors need to keep in mind that the futures prices for oil are much higher then $30/bbl. Go out a couple of years and the prices are in line with no impact to cash flows.

Regardless, the stock is under control of debt fears whether rational or not. Sure, this seems like a capitulation event, but the equity remains a massive risk as long as the company has $20 billion in debt and needs to rollover loans. A forced equity raise or other events to reduce the debt load could harm shareholders.

The recommendation is to continue watching copper prices and keeping an eye on this stock as one of the best ways to play an eventual rebound in commodity prices.

Stone Fox Capital
39.48K Followers
Author of Out Fox The Street
Out Fox the market with misunderstood, high reward opportunities
Stone Fox Capital Advisors, LLC is a registered investment advisor founded in 2010. Mark Holder graduated from the University of Tulsa with a double major in accounting & finance. Mark has his Series 65 and is also a CPA.