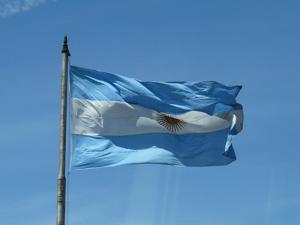 Seven years ago, I found myself in Buenos Aires, Argentina on a long-awaited vacation to the South American country. This is a country settled by European immigrants (97% of population has Euro roots) that is rich in natural resources. Specifically, there is a concentration of Italian and German surnames. Those with Italian names include Manu Ginobili of NBA fame and Gabriela Sabatini from the world of tennis. The former ruling family, Kirchner, has German origins.

Always one to try to understand the relation of economics and politics, I asked our Argentine contact what life was like for the Argentinians in Buenos Aires. She related how expensive it was for the average person to purchase imported items. This resulted from the economic crisis of 2001-2002. When I asked if she traveled overseas, she looked at me cross-eyed. There was no way this was possible for her without saving for quite some time, not at their currency's exchange rate.

In 2008 the exchange rate was 3 Argentine Pesos to 1 U.S. Dollar (NYSEARCA:USD). While the USD was not universally accepted, convertibility into Pesos was no problem. What I immediately noticed was how cheap certain things were like beef and public transportation. I could get a substantial meal with wine in a restaurant for a very reasonable price, and this was in a big city. Prior to their economic problems, the exchange rate was 1:1.

I had a conversation with a cab driver who told me things were indeed tough but that people were making it. One question I had for him were the signs I saw at gas stations saying "GNC". The GNC price was comfortably less than the price for gasoline. He said that was the "salvation" of the country a few years back. GNC is more commonly known in the U.S. as "CNG" or Compressed Natural Gas. It seemed like most of the cab fleet in Buenos Aires ran on GNC. You might think there was some "green" initiative instituted by the government motivating this. You would be incorrect. The cabbie said it was an economic necessity. Since oil is priced in USD, imagine having the price at the pump triple in a short period of time. The currency devaluation made things priced in USD three times as expensive. It simply became imperative for the country's taxis to convert to GNC or else cease to exist. This is a frequent point I make to people about economies adjusting to prices but that is a topic for another day.

The current official exchange rate is now almost 14:1 (pesos per USD). How did Argentina arrive at their condition? During the late 70s and early 80s the country went into debt for state funded projects, a war against the U.K. for the Falklands islands, and state takeover of private debts. Compare their path to the U.S. experience.

Our debt has an orientation towards entitlements, which will eventually cripple our budget. Our wars are focused on terrorism with significant costs for the incursions in Iraq and Afghanistan. We have certainly had our share of state takeover of private debts. The bailouts of 2008-2009 moved private debt towards the public. More surreptitiously, the unofficial financial arm of the government (the Fed), has undertaken a massive acquisition of public and private debt since 2008 to the tune of trillions. Much of the private debt is in the form of home mortgages.

In 1999, the Argentine deficit widened to 2.5% of GDP. By comparison, our deficits were as large as 10% in 2009, and have only recently come up to a deficit of 2.8%. The IMF advised Argentina that their deficits were too large relative to their economy and that austerity was required in order to restore investor confidence. Such guidance did not apply to the U.S. whose deficits were comparably much worse and potentially larger when considering unfunded liabilities. The Argentinean government complied and introduced austerity measures and tax increases. The ensuing domestic instability (strikes, riots, dissatisfaction with ruling party) was utterly predictable. Shortly thereafter, the Peronist, Kirchner family assumed the Presidency for 12 years. This regime did not benefit the economy.

In the U.S. we have barely experienced additional tax pain and no real austerity (the payroll tax was cut for a period). Despite dodging tax increases and no austerity, we had the birth of opposing political movements and a change in the Presidential party in 2008. In the mid-term elections of 2010 and 2014, we experienced political change in Congress. We saw the rise of the Occupy Wall Street movement and the Tea Party. As I discussed in my books, the emergence of a viable third party or parties is in the offing. The strength of Donald Trump and Bernie Sanders is a manifestation of voter unrest. They are simply running in the GOP and Democratic primaries as a matter of convenience, but their messaging runs counter to the traditional platforms. For all intents and purposes, they are third party candidates.

In July of 2001, Standard and Poor's (S&P) trimmed Argentina's credit rating. S&P did the same thing to the U.S. rating 10 years later in 2011. There was uproar in the halls of Congress about this even though arguably, the lower credit rating could have come much sooner. To some, it was inconceivable to lower the credit rating of the United States in light of those same agencies granting pristine ratings to mortgage-backed securities in their heyday.

Rising bond yields forced Argentina to turn to other lenders for funding. Earlier I mentioned how the IMF stepped in. Argentina then broadened its request to the World Bank and the U.S. Treasury. In the U.S., we have already mentioned support by the Fed. Unlike Argentina, the U.S. can simply turn to its central bank for funding.

A run on Argentine bank deposits occurred in 2001. The natives were understandably restless with the continued failure of their government's economic policies. People wanted to flee the Argentine peso for the refuge of the USD. As you might expect, the government froze bank accounts for up to a year and limited customer withdrawals. Pension funds were expropriated.

No bank runs have occurred in the U.S. though we should not ignore the brewing war on cash that is often associated with the war on terror. This topic alone could encompass an entire article. Just last year, JP Morgan Chase announced that cash could no longer be stored in the bank's safe deposit boxes. If you compare the amount of cash in circulation relative to the edifice of credit, you get a sense of the banking system's problem; it is significant.

During the Argentine economic crisis, alternate currencies evolved and some government employees were paid with IOUs. During our economic crisis some states payed with IOUs, and in the case of Illinois, some bills simply remain unpaid. If you were fortunate enough to be a lottery winner in Illinois, you may still be awaiting your bounty. Alternate currencies have evolved. Bitcoin is the most well-known, alternate digital currency. I mention Bitcoin, not to predict its success or failure, but rather to highlight the fact it came into existence at all, this is a product of economic stress.

In 2014, Argentina dealt with their crisis through another default, their eighth, albeit this one had unusual circumstances. In a recent Presidential election, the Argentine people rejected the policies of the Kirchner administration and have apparently embraced economic reforms via the election of Macri.

The Argentine model is instructive since it reveals how nations deal with debt crises. The comparison to the U.S. is not precise, though the major difference lies in one factor. Primarily, the existence of the USD as the currency of the world and the confidence it brings is the main factor separating the fate the U.S. from that of Argentina.

The ample supply of credit has instilled a false confidence. The deflationary winds are blowing some of this confidence away. Despite all the efforts, and they are massive, to hold interest rates down, borrowers are reluctant to borrow and lenders are reluctant to lend. What we have witnessed is massive debt accumulation on the part of U.S. companies for the purpose of financial engineering.

Corporate defaults and banking crises tend to be related. Many times, corporate defaults are precursors to government defaults or debt rescheduling. When interest rates simply return to a long-term average, the collision of politics and economics will be in full display in Washington and state capitals across the country.

A U.S. debt crisis may not look exactly like Argentina's, but many of the same elements are present. This time is NOT different.

Jim Mosquera
318 Followers
Jim Mosquera is the author of the books Escaping Oz: An Observer's Reflections, Escaping Oz: Navigating the crisis and Escaping Oz: Protecting your wealth during the financial crisis.The books discuss how the public will greatly misinterpret the capabilities of our financial Wizards and what they should do to shelter their investments. The latest release, An Observer's Reflections, also presents a non-political viewpoint on today's challenging social and economic issues.He is also the author of a novel series (2020, Rebellium, Division, HOPE) featuring politics, financial crisis, cyber terror, and the media. These realistic thrillers will make the reader reflect on current events.His investing experience ranges from trading commodity futures to stocks, bonds, ETFs, and cryptocurrencies. He leads the Entrepreneurship Center at within the Plaster College of Business at Lindenwood University.