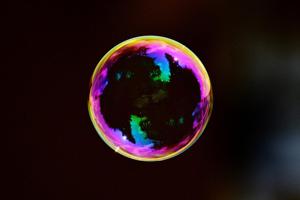 These days I see frequent mentions of bubbles in investment commentary. The concept is vital to understanding our economy yet encrusted with myths in the minds of most investors. This article attempts to cut through these to the known history and theory of bubbles. As usual with economics, this gives us clues about the future - useful only to those who act on them.

"You can't cheat an honest man."
- Title of W. C. Fields' 1940 movie, harshly and cynically describing the essence of bubbles.

Bubbles are an inherent aspect of free market systems, easily produced in classroom exercises. Whether managing a nation or a portfolio, they must be understood.

Those who lived through the giant 19th century UK and US investment bubbles would find our bubbles quite familiar. Journalist and promoter Charles Mackay participated in several, and the scars from them led to his bitter polemic Popular Delusions and the Madness of Crowds. See this history in "Charles Mackay's own extraordinary popular delusions and the Railway Mania" by the brilliant Andrew Odlyzko (Prof Mathematics, U MN).

Then and now, bubbles have common characteristics.

A class of asset prices detach from normal valuation standards, driving investment into the mispriced asset - like warm air rises to power a hurricane, drawing in still more warm air - leading to a storm. The history of modern economies is a series of bubbles just as geological history is a series of catastrophes.

Bubbles grow under the gold standard, and can do so without fractional reserve banking or activist central banks. While painful to investors, their "field of dreams" investing sometimes lays the groundwork for long booms, as the resulting railroads and dark fiber are put to use by investors who bought them for a song.

Bubbles are consensual hallucinations. We choose to join. The Fed's monetary magic can no more make investors burn capital in Pets.com than it can make them adopt base jumping as a hobby (the popularity of this myth demonstrates why "It's Not My Fault" should replace E Pluribus Unum on the Great Seal). They are psychological phenomenon, and as such impossible to predict except in broad strokes.

Bubbles are similar to but different from Ponzi schemes. Both rely on a supply of new marks to fuel growth (belief that there is always a "greater fool" to buy my shares). They pop when the flow of capital diminishes from exhaustion of existing sources or a decrease of investors' risk tolerance (sometimes due to outside factors, such as recessions or geopoliticals). Bubble investors are ruled by the prisoners' dilemma: early "defectors" from the bubble (sellers) end the game and grab most of the profits -- which makes bubbles so unstable.

The difference between a painful bubble (e.g., the tech bubble) and a catastrophic one (e.g., the housing bubble) is the involvement of banks. Every depression during the past two centuries had banks at its center. Banks are powerful forces no regulator has succeeded in restraining for long.

Bubbles can create bull markets that lead to crashes, but so can other forces. Not all rising security prices result from bubbles, nor are all crashes the result of bubbles.

"In short, monetary policy will never be the same after the crisis.

--- Olivier Blanchard (Director of Research at the IMF, Professor of Economics at MIT) in "Monetary Policy Will Never Be the Same", 19 November 2013.

Our bubbles are different in some ways from those that came before. Private sector leverage has risen to levels unimaginable in the 19th century, and that changes everything. For more about this see Fact & Myth About The Debt Supercycle, A Story Of Modern America at Seeking Alpha and "The Doom Loop: equity and the banking system" by Andrew Haldane (Executive Director at the Bank of England) in the Feb 2012 London Review of Books.

The other difference between bubbles then and now is the new era of economic management by governments (including their central banks), as they use extraordinary tools such as quantitative easing, negative nominal interest rates, and massive guarantees. The effects of this remain poorly understood. Let's hope our education is more pleasant than painful.

Perhaps the largest difference is that the great 19th century bubbles occurred during the rapid growth of an industrial revolution - a kind of falling forward. Rapid growth of technology and incomes changed everything between 1870 and 1930, with progress continuing through 1960 then slowing. For example, June Cleaver, the mother in "Leave it to Beaver" (1957+), would easily adapt to a 2016 home -- but her great-great-grandmother from 1897 would be lost in a 1957 home. (See this comparisons of past growth with ours.)

Since 2000 we have sunk into secular stagnation. Without rapid underlying growth, bubbles give the economy a destructive boom-bust cycle. Then there is the worse news, first announced by Larry Summers at the IMF Economic Forum on 8 November 2013: even bubbles no longer spark strong -- if temporary -- growth.

It is a central pillar of both classical models and Keynesian models that it is all about fluctuations: fluctuations around the given mean, and that what you need to do is have less volatility. I wonder if a set of older ideas firmly rejected in {graduate monetary economics courses} - that went under the phrase "secular stagnation" - are not profoundly important in understanding Japan's experience, and {might be relevant} to America's experience.

"… If you study the economy prior to the crisis, there's something odd. Many people believe that monetary policy was too easy. Everybody agrees that there was a vast amount of imprudent lending going on. Almost everybody believes that wealth, as it was experienced by households, was in excess of its reality. Too easy money, too much borrowing, too much wealth. Was there a great boom? Capacity utilization wasn't under any great pressure. Unemployment wasn't under any remarkably low level. Inflation was entirely quiescent. So somehow, even a great bubble wasn't enough to produce any excess in aggregate demand."

Investing in an era of bubbles

The series of bubbles since the 1990 "sun belt" real estate boom entices investors into stock market surfing, riding a boom-bust sine wave in which only those running the casino win.

A return of corporate profit margins and stock valuations to historical averages (e.g., those of the 1980s and 1990s, before the bubble era) might drop stock prices by a third, taking the real value of stocks back roughly to their value 20 years ago. While a twenty-year real price-only return of zero is not unusual (26 years in 1927-53, 32 years in 1955-87), back then they paid substantial dividends. Buyers of the S&P 500 today will earn little more than 2.2% on their cost, assuming that dividends are not cut (but cuts are likely if profits decline).

As John Hussman and others have shown, a buy and hold strategy today entails great risk to principal. So we have become a nation of traders - as shown by the fantastically high turnover rate of shares on the stock market, with hordes of "investors" frantically playing a game only a few can win (e.g., when too widely used technical risk methods will not only fail most who use them, but increase volatility).

There are no easy solutions for investors to these high risks. Seeing them is the first step to success.

Perhaps we will look back on this period as one of broken markets in which "the only way to win is not to play". I disagree, since there are many methods to manage risk. For those who can afford to play, I suggest tightening your risk methods as the economy weakens (for details see Effects Of The Coming Market Crash On The Economy - And Perhaps On You at Seeking Alpha).

We can only guess as what lies ahead. But I believe that relying on faith will leave investors feeling like Prospero's son in "The Tempest", getting cold comfort from his philosophy...

"You do look, my son, in a moved sort,
As if you were dismay'd: be cheerful, sir.
Our revels now are ended. These our actors,
As I foretold you, were all spirits and
Are melted into air, into thin air:
And, like the baseless fabric of this vision,
The cloud-capp'd towers, the gorgeous palaces,
The solemn temples, the great globe itself,
Ye all which it inherit, shall dissolve
And, like this insubstantial pageant faded,
Leave not a rack behind. We are such stuff
As dreams are made of."

Larry Kummer
387 Followers
Larry Kummer has 37 years experience in the finance industry in a variety of roles. From 1994 to 2013 he was at UBS, the last 15 years as a senior portfolio manager and Vice President of Investments. Now retired, he had most of the major licenses at FINA, plus those for commodities and insurance.  His articles are widely reposted. Those about economics & finance appear at Roubini’s Economonitor, Investing.com, OilPrice.com, Wolf Street, and (of course) Seeking Alpha. Those about climate change appear at websites such as Climate Etc (of eminent climate scientist Judith Curry). Those about geopolitics have been posted at Martin van Creveld’s website and elsewhere. See his articles about the 2007-08 crash here: http://fabiusmaximus.com/financial-crisis/ Seeing the real estate crash coming, he began writing in Nov 2007. He called the recession in early 2008 (a controversial call then). Like everybody else, he didn't anticipate the depth of the crash in late 2008 -- although accurately reporting as it happened.