The National Debt Clock on 6th Avenue in New York City dramatizes our rapidly growing debt. Its bright digits currently display more than $15 trillion in U.S. Treasury debt, with a million more added every 30 seconds or so. Constituting about two-thirds of the debt are the "marketable" securities: bills, notes, bonds, and inflation-protected securities[1]. The rest are non-marketable securities, including those held by the Social Security trust fund.

The total debt outstanding is the most-discussed statistic concerning Treasury debt. The timing of the repayment obligations is nearly as important, but as The Economist has observed, "the mechanics of how countries borrow receive far less attention than how much they borrow." There is no big clock on any public street to summarize how the Treasury arranges its borrowings. Yet if there were, it would display the average maturity of the outstanding marketable debt. This is the most widely-followed measure of the structure of the debt portfolio[2]. The Treasury Department[3] and the bond market[4] monitor it closely. It currently stands at just over five years, up from about four years in 2008. In contrast, the average maturity of U.K. government debt is over thirteen years.

The Treasury Borrowing Advisory Committee ("TBAC") is a group of bond market professionals who advise the Treasury on the management of its debt offerings. Last year, in a report to the Secretary of the Treasury, TBAC stated that while

the average maturity of marketable debt has increased. . . [we] felt strongly that the longer term fiscal challenges warranted further progress on this front.

Two Risks in One

Why did the Committee want the average maturity to be extended? Because longer maturities reduce rollover risk. This is the risk posed by the need (except in times of surplus) to refinance securities as they mature. Despite its importance, not everyone defines rollover risk in the same way. Some define it as interest rate risk, the risk of higher rates when the debt needs to be refinanced; others define it as liquidity risk, the risk that it might be impossible to refinance the debt. I believe that both interest rates and liquidity should be included as components of rollover risk[5].

Since exposure to rollover risk is linked to the timing of debt maturities, the average maturity is a fair guide to the frequency of this exposure. Average maturity, like a wavelength in nature, has an inverse relationship with frequency.

Floaters to the Rescue?

The Committee proposed this as a sample FRN:

The FRN would not mature for two years, but its interest rate would be set every trading day at the 3-month bill yield + 0.08%. Other indices are possible and the actual margin would be determined by market demand when the security is offered.

TBAC suggested that floaters might replace six-month T-Bills to "reduce rollover risk." This is true, in the literal sense that a two-year floater would not need to be rolled over as often as a six-month bill. With a longer maturity than the six-month bill, the two-year FRN would clearly have less liquidity risk. But the floater could pose more interest rate risk than the T-Bill.[7]

It is very possible that FRNs will help the Treasury reduce its borrowing costs, reduce overall risk, and bring in new investors[10]. New terminology will be needed to accurately discuss and assess the risks of the Treasury's debt portfolio.

A Comparison with Historic Rates

How might these three funding methods compare in practice? Let's examine scenarios for each of the three alternatives, assuming the Treasury yield behavior over the ten years from 2002 to 2011. We assume that funding began on the first day of 2002, with the bills rolling every six months, and the notes and FRNs rolling every two years.[12] 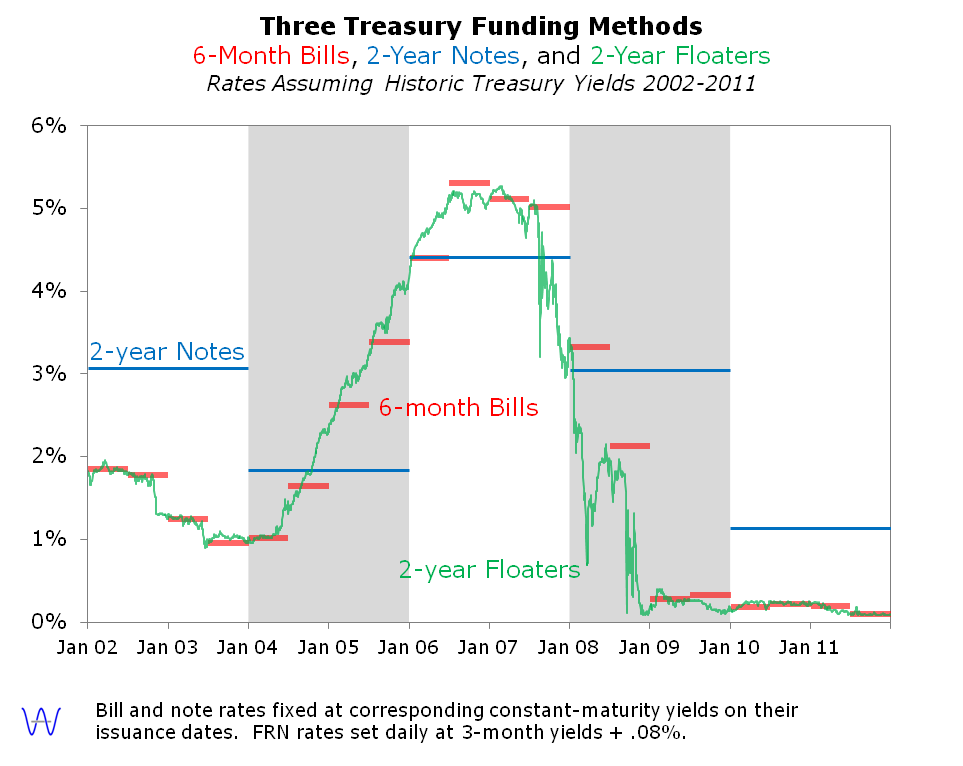 Take a look at the 2004-2005 period, the only one with rates rising up from a low level. The blue line indicates the 1.84% fixed rate on a 2-year note. The four red lines show the six-month bill rates. The green line, for the FRN, is the most variable. It begins the period at just over 1%, but its steep growth results in a higher average rate (2.38%) than the note rate, as shown in the table below.

Although FRNs would have been the most costly approach for 2004-2005, they would have been the least costly in three other periods and over all ten years. The standard deviations for the bills and floaters would generally have been similar to each other (and always higher than for the notes, which of course had no variation within each two-year period). This suggests that difference in interest rate horizon between the bills (.5) and floaters (.004) is not important. But if rates begin to rise as they did in 2004-2005, the floaters could present the most variability and the highest cost of the three funding strategies[13].

A decision on Treasury FRNs is expected by May. These new instruments demand a new language in order to accurately measure their risks and to ensure that they meet the Treasury's goals.

[1]We will sidestep the complexities of inflation-protected securities in this article.

[3]See page 15 of this report from the Treasury.

[4]For example, see this Reuters article. Bloomberg tracks the average maturity with the symbol USMKDEBT.

[5]We could also include issuer-specific risks such as credit risk, which would have been unthinkable for U.S. sovereign debt until recently.

[6]The Committee's presentation begins on page 39 of the report referenced in footnote [3] above.

[7]TBAC recognized the interest rate exposure of FRNs in its presentation.

[8]Issuer specific risks such as credit risk could affect the margin level, but they could also affect the daily reset rates if the index (such as T-Bill) is linked to the issuer.

[10]See this report from Pyramis Global Advisors for an analysis of Treasury FRNs and their potential consequences.

[11]Modified duration would be a good indicator but it is unfamiliar to most outside the bond market. It also would not be comparable to historic average maturity.

[12]We assume a 0.08% for each FRN offering, although the margin would likely have varied.

[13]The Committee noted that given today's low rates, now may not be the best time to launch floaters, but it might still be wise to begin the program now so that it will be available if conditions become more suitable.

Winthrop Smith
8 Followers
Follow
5 Comments
To ensure this doesn’t happen in the future, please enable Javascript and cookies in your browser.
Is this happening to you frequently? Please report it on our feedback forum.
If you have an ad-blocker enabled you may be blocked from proceeding. Please disable your ad-blocker and refresh.