With gold regaining its status as a safe alternative to equities, it's about time we look at the precious metal. Gold is becoming increasingly important in this market, and the potential for large gains relates to (1) the range gold can move and (2) the possibility of a reversal with extremely high momentum:

Gold's huge sell-off since 2011 makes a comeback one of potentially great heights - a 50% upside if your price target is the previous high.

We are seeing the best quarterly performance in gold in the past 30 years, signaling a possible turnaround.

In this article, we will focus on the SPDR Gold Trust ETF (NYSEARCA:NYSEARCA:GLD) instead of the physical metal or futures. While futures perhaps constitute the most profitable of the bunch for speculative trades, it is also of higher risk and outside the risk tolerance of most investors. Physical gold is the best of these three options for holding gold but is illiquid and has delivery as well as storage costs.

For most investors, GLD is the best option to play gold, even though it does not entitle you to physical gold. Thus, if you're buying gold to prepare for an economic collapse or the like, look into physical gold. For the rest of us, we will discuss GLD as an investment.

Gold is less speculative than most other commodities and is typically safer, as the biggest governments' central banks still hold gold as a reserve asset. Those who suspect a true economic collapse typically hold gold, banking on the idea that gold will become an actual currency if fiat currencies fail. Although I am bearish on the economy and hate the current financial system, I highly doubt that non-fiat currency will ever "become a thing."

Thus, we should look at gold as an investment somewhere between the speculative investments of stocks and the inflation-defensive investments of bonds. If we place GLD on this spectrum, it is closer to a bond ETF than a stock. Indeed, like bonds and unlike stocks, most hedge funds are not apt to take strong short positions on GLD: 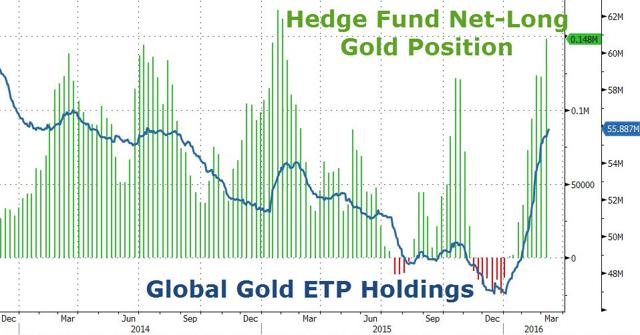 The demand for GLD from hedge funds is more attributable to true hedges (most hedge funds aren't actually for the sake of hedging) than speculative positions meant to profit from a demand for gold. That is, GLD is seen as a protection against a market crash. If this were not true, we would not see so many GLD positions in hedge funds during the 2014 gold bear market.

With GLD being at a near-year high for net-long positions in hedge funds, we can only ask if the hedge funds know something we don't. The recent economic news has been mixed. The Philly Fed report, for instance, shows a huge spike in new orders; other reports, such as imports and exports show clear declines.

Gold and the Market

What we have noticed in the past few months is that GLD has seemingly lost its negative correlation to the stock market. That is, when stocks surge, GLD does not drop as expected. In fact, in the past few weeks we have seen both GLD and the general market rally.

I sincerely doubt this is due to a real need for gold - i.e., gold used for jewelry. No, the recent gold rally is more likely due to banks and hedge funds increasing their holdings in gold, primarily as hedges but also as speculative investments. Remember that Goldman Sachs correctly predicted the gold crash in 2013; now they are predicting a rally for 2016.

The Fed also has some blame. Without clear policies for interest rates, Fed pushes banks and hedge funds toward gold. The lack of the rate raise last Wednesday has caused concern for the dollar and for future rate raises, as explained in this video:

It's Not All about the US

Check out this line for the new iPhone in China: 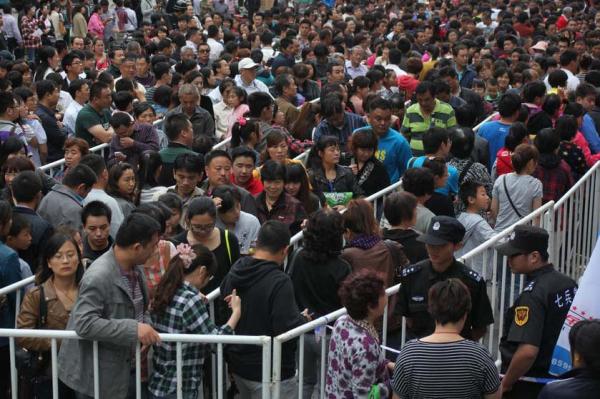 Actually, I lied. That's a line to buy gold from back in June 2013, which coincided with a 12% correction in the Chinese stock market. 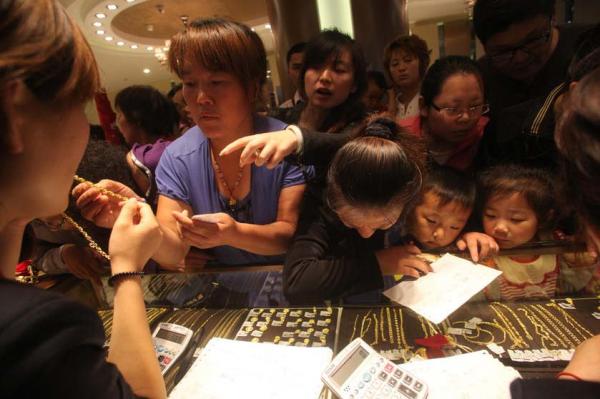 Demand in Asia is also driving up the price of gold, which drives up GLD as a proxy. According to Reuters, the majority of gold demand comes from Asia. India and China alone make up 50% of the gold demand.

With North America only accounting for 8% of gold demand, it's no wonder that the US stock market and gold prices are out of alignment. In fact, to predict gold demand, you might be better off watching the Chinese stock market. On that note, we see physical gold demand at pre-2008 levels.

Miners affect gold price by increasing the supply. Mine production has slowed in growth and is at a nearly sideways trend. 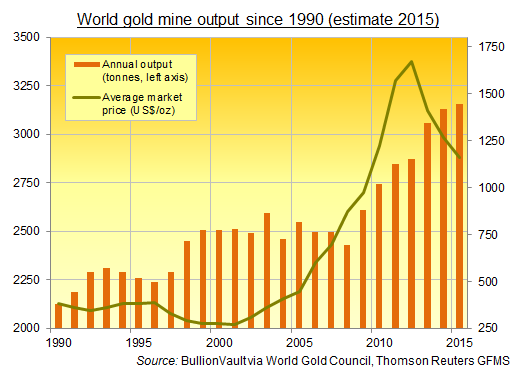 Much of the recent gold production has been from China, which has been constantly increasing its gold mining efforts despite the low price of gold. China uses gold to hedge its currency. With the Yuan taking hits in the recent years, China's growing gold reserves have served their purposes. The Chinese demand for gold should grow as the Yuan falls.

If world gold mine production continues to fall to where gold production levels out, we have a status quo situation, in which demand exceeds supply. In this situation, gold prices will rise in tandem with the current stock market bubble and debt bubble.

The US, with its recent interest rate hold, has given China what it wants. But the currency wars have just begun. Most of the major currencies will see devaluation against one another.

Eventually, some currencies will come out on top. But throughout this chaos, we should see gold appreciate against all other currencies, simply because gold doesn't have a country or a central bank trying to devalue it. Thus, the simultaneous devaluation of the greenback and Yen, for example, will provide a rising gold/dollar and gold/yen phenomenon.

The stock market crash or correction that we will inevitably see (I'm predicting 2016) should further bolster the strength of gold. A market crash will likely lead to the printing of money for the purpose of quantitative easing, which would further devalue currencies, amplifying the currency wars. Interest rate decreases would also help stimulate the economy but hurt the bond market.

Hence the final node of the vicious cycle: investors and hedge funds selling bonds and avoiding cash in favor of appreciating gold. An ounce of gold could easily break the $3,000 per ounce price range in such a situation. Holding GLD during this time could easily be your best-performing asset.

If this prediction comes true, you would only need have invested $419,000 in GLD to turn that sum into a nice million.

My Exploiting Earnings premium subscription is now live, here on Seeking Alpha. In this newsletter, we will be employing both fundamental and pattern analyses to predict price movements of specific companies after specific earnings. I will also be offering specific strategies for playing those earnings reports.

Our last newsletter looked at the upcoming earnings for Lululemon (NASDAQ:LULU).

Because my articles occasionally get 500+ comments, if you have a request for an analysis on a specific stock, ETF, or commodity, please use @damon in the comments section below to leave your request.