Those who have read our weekly commentary will know that we had been short Valeant (VRX) since Bill Ackman acquired his position. We closed that position last week at a sizable profit, and are now looking at potentially going long.

Lots of people love to hate on Bill, and with his performance YTD we can understand that the Ackman bears are going to trumpet their success. We take a more balanced view. Bill takes outsized bets on stocks. Some win big, and others lose big. We were fortunate to recognize Valeant as an early loser, and that was the catalyst for our short position.

However, Bill knows how to pull value levers at a company. There are a few parallels between VRX and JCP, namely his over-reliance and trust of management. Ron Johnson made a huge mistake in getting rid of JCP's discounting, and if Bill had instead pushed to realize value from the company's real estate, for example, perhaps shareholders would have done better.

VRX is a similar story: Bill had complete faith in Pearson, and trusted the company to keep up its game of inflating earnings numbers and acquisitions; something that we saw as simply bad business.

That's all in the past now, and the question is: what is Valeant's business worth going forward?

We see 2 levers that Bill can pull, and with increasing representation on the company's board, we see an increasing possibility for him to pull these levers and realize value.

Before we begin: this is a complicated story, a complicated position, and it's not for the faint of heart. We do not see a reason to, at this time, build a large position in Valeant, so don't go putting 10% of your retirement portfolio in the equity. Indeed, we wouldn't buy the equity without a hedge at this point.

Lever 1: Sale of the Business Parts

Valeant has made approximately $38 billion of acquisitions since it started its rollup strategy. Against this, the company has amassed $31 billion of debt. Of these acquisitions Bausch and Lomb and Salix make up $25 billion.

Let's assume the company added no value on these transactions in the form of SG&A and working capital rationalization. These businesses would sell for $25 billion, and proceeds would be used to pay down much of the debt for the company. Assuming a 9% cost of debt, the remaining business would generate about $3.2 billion in levered free cash flow.

Now, Valeant has undoubtedly added value at B+L and Salix. R&D cuts were only 28% of the total synergies realized from the deal, the majority being in marketing, distribution and administrative costs. Because of this value add, we believe that B+L and Salix would fetch at least $33 billion in a sale (based on the original purchase prices, plus $1.1 billion of non-R&D synergies with a 7x multiple on them).

With this valuation, Valeant could pay back the entirety of its debt, and the remaining business parts would generate $3.2 billion of free cash flow, valuing the current equity at ~3x cash flow.

Running some simple math: if we take that $3.2 billion of cash flow and extend it out for 10 years at 0% growth and then end it (no terminal value), at a 13% cost of equity, that stream of cash is worth $17.3 billion. Recall that this is after paying off all the company's debt, so this is comparable to today's valuation of $9.3 billion. This implies a share price of $50 per share.

Pearson is out. The CFO, despite his efforts to hang on at the board level, is out. So the question is, what will new management do?

We don't know for sure; however, we can take a few educated guesses. Step 1, as is the case with most new CEOs, is a shakeup of the rest of management. Step 2 is getting internal accounting under control, and getting a handle on the business.

After that, we expect the focus of the business will turn to generating cash, reducing price increases that garner the attention of Washington (as an aside, we believe Washington's ability to actually deal with the industry practices regarding pricing is limited). In effect, the strategy going forward will be "laying low" for a while.

So what is that strategy worth to shareholders? If we assume sustainable levels of R&D (comped to the industry) at ~10-12% of sales, take account for full amortization of drugs (something the company should have been doing all along), no price increases, and account for the finite lives of the company's current and expected portfolio, the company generates about $2.25 billion of levered free cash flow. The equity stands, then, at 4.15x free cash flow, or a 21% free cash flow yield.

In this scenario, we believe fair value rests conservatively at approximately 5x levered free cash flow, or $11.25 billion, implying a share price of $33, equating to 8.25x 2016E EPS of ~$4. We should note that at current YTMs, a debt buyback would be significantly accretive to earnings, and so using the company's current cash and free cash flow for that purpose would raise this value.

The key in this case, we believe, is that much of the risk "burns off" over time. Valeant's businesses DO have fundamental value, and we believe that with time, scrutiny and bearish sentiment on the company will decrease. Things we would watch for include better disclosure on the financial statements, a return to GAAP accounting, and the pay down of debt as fast as possible.

We should note that we believe those inside Valeant who are now running the show (namely Bill Ackman) have learned from their mistakes. We agree with Ackman's analysis that there is value in the company, however I believe we disagree on the amount (we don't see this getting back to $190 per share anytime soon). We believe that the company has been taught a harsh lesson about reporting non-GAAP measures, and this will be better controlled in the future as many analysts and investors have witnessed the result of relying on these measures for evaluation.

We have given some thought as to how to structure this position, should we decide to enter. We currently favor a mix of options and plain equity in the relation shown below. 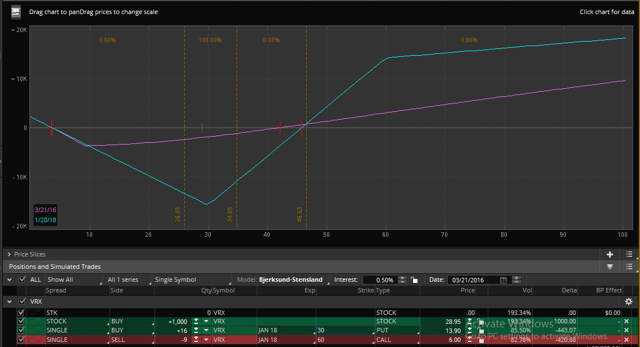 To summarize it, it's a straddle, effectively, but an unbalanced one. We are protected in the case of bankruptcy (which we believe is unlikely), and can realize 100% returns if shares rise to $60 per share, and in the event of longer term upside, we will participate in some of it if shares continue beyond that point.

We value the company at $50 per share on a conservative SOTP basis, however, upside may exist beyond that. For example, our multiple on synergies at B+L and Salix was deliberately conservative. Assuming a 10x multiple on the $1.1 billion of opex savings, the valuating for those two companies rises to $36 billion from $33, or another ~$8.80 per share.

We also note that because the position is split into 3 legs, we are allowed significant flexibility when it comes to managing the position. If we believe that bankruptcy is taken off the table, we could sell the put leg, leaving us with our unbalanced covered call position (900 shares on the calls vs. 1000 shares owned, or 100 shares of upside participation beyond the strike of the calls).

Similarly, we could adjust the ratios at any point to alter our risk reward and trade around the position. The largest risk to the position is if Valeant shares trade at the same level they do today in January of 2018. We view the chance of this happening as slim, given the catalysts we have outlined.

We don't generally like the pharmaceutical business, but Valeant presents an interesting case where there are a few different levers to realize value in excess of where the stock is trading. Today's announcement of the addition of Bill Ackman to the board and the removal of Mike Pearson presents the catalyst we were waiting for: someone who is willing and able to pull those levers.

Let us be clear: this is not a bet that Bill is going to get shares back to 100% of what he paid for them. In fact, it is not a bet on Bill's investing prowess at all: it is simply a bet that Valeant's parts are worth more to someone else than the market is currently pricing in.

There is still risk inherent in the company, of course, but we feel as if the market is overestimating that risk. Much of the uncertainty around the company's legal standing has been priced into the stock, at least in expected value terms. We believe that this presents a high risk/high reward opportunity for investors.

Pelorus Capital
951 Followers
I started as a value investor. I'm still a value investor, but I've learned that buying something at a discount to its intrinsic value means more than buying low multiple stocks. Return on invested capital matters, indeed, coupled with revenue growth it is perhaps the only thing that matters! So now, instead of buying low multiple stocks, I seek to do the following: Buy good companies. Don't overpay.Do nothing.
Follow

Disclosure: I/we have no positions in any stocks mentioned, but may initiate a long position in VRX over the next 72 hours. I wrote this article myself, and it expresses my own opinions. I am not receiving compensation for it (other than from Seeking Alpha). I have no business relationship with any company whose stock is mentioned in this article.

166 Comments
To ensure this doesn’t happen in the future, please enable Javascript and cookies in your browser.
Is this happening to you frequently? Please report it on our feedback forum.
If you have an ad-blocker enabled you may be blocked from proceeding. Please disable your ad-blocker and refresh.