Malaysia has been in spotlight recently, but not for good reasons. The news regarding its state owned investment fund company 1 Malaysia Development Berhad (1MDB) is the most recent example. The company, chaired by the prime minister is bleeding money and the prime minister himself is accused to be in a corruption scandal. So, what should investors expect from Malaysia this year?

What You Have To Know

There are several factors, both internal and external that contributed to the decline of Malaysian equity as represented by MSCI Malaysia ETF (NYSEARCA:EWM). The index ETF took a 50% dive since mid 2014 putting Malaysia in true bear market. Keep in mind that these factors are still in play and will determine the market direction in 2016. However, EWM is outperforming regional peers YTD with 10% gain.

As a net exporter of oil, sentiment towards Malaysian equity inevitably depends on oil price. The government's coffer is filled mainly by payment from the national oil company, Petronas. With the decline in oil price, the sentiment towards Malaysian equity turned sour. The government was even forced to revise their 2016's budget when the oil price continued to drop in January this year. The earlier version of the budget was made based on the assumption that oil price would be around $48 per barrel.

In fact, since the price of oil started to decline in mid 2014, the rolling 60 days correlation between EWM and US Oil Fund (USO) increased steadily. As such, I think investors could use oil price as the main gauge to identify suitable entry into EWM. 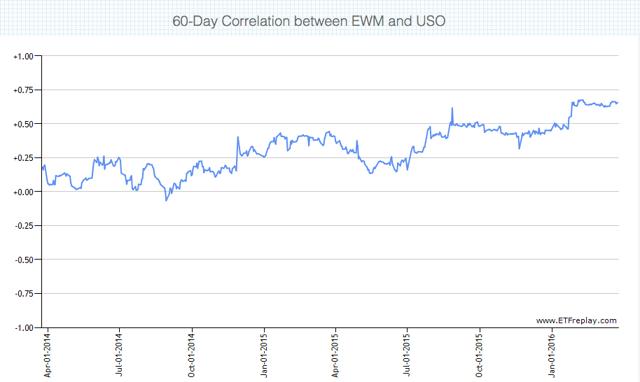 2) It's Always About China

The slowdown in China, which is Malaysia's top trading partner, translates into earnings recession for Malaysian companies. This earnings recession started in 2014 and continued throughout 2015 as shown below. In fact, corporate earnings in Malaysia was down 6% in 2015 compared to the previous year. 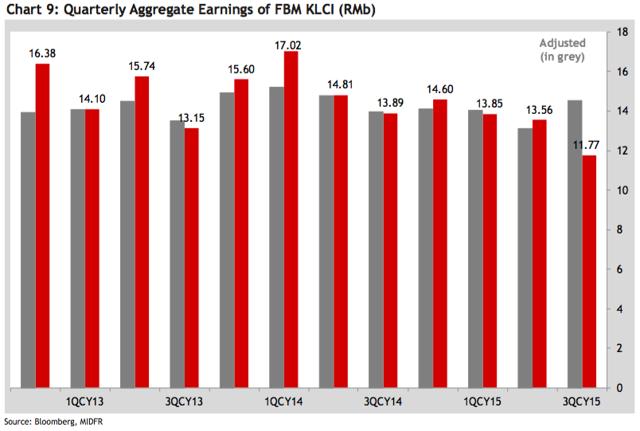 Last but not least, Malaysia has also been the victim of the potential interest rate hike in the US. Since the talk of rate hike started in 2013, foreign funds has been net seller in the local exchange. However, the flow of foreign fund is quite predictable too. Foreign fund seems to "sell the news" as shown during the taper tantrum of 2013. But when the news is confirmed, they flow back into Malaysia's equity as buyer. 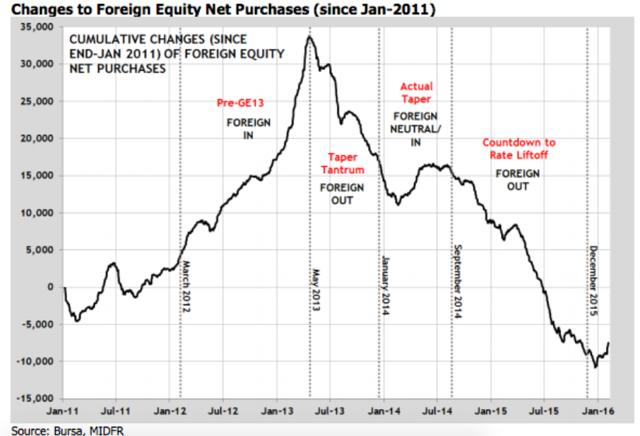 The rapid outflow of foreign funds has luckily been partly absorbed by purchase from local funds. In fact, in September 2015, the government, through its other state owned fund called Value Cap tried to stem the decline in Malaysian equity by injecting RM200 billion into the fund. The plan is that Value Cap will buy undervalued stocks to help stabilize the market and restore confidence. This helped the Malaysian equity to stabilize after reaching the bottom in August.

So, we could see that flow of foreign fund greatly influence the performance of Malaysian equity since foreign institution usually hold more than 20% of total market cap of the main benchmark, the Kuala Lumpur Composite Index (KLCI). There are a host of factors that influence the flow of foreign fund into Malaysian equity. But for now, the pace of interest rate hike in US is the biggest concern. Any unexpected change in the pace and timing of rate hike would be unfavorable. 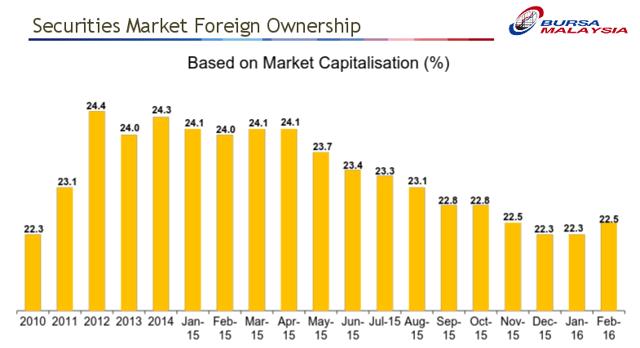 As for internal factors, there are several developments that might, to a lesser degree, affect the direction of KLCI such as the change of central bank's governor. But one major crisis that weighs on investors' sentiment towards Malaysia is the 1MDB crisis. It is a long story and you can follow the story here and here. But to make it simple, the state investment fund is in deep trouble due to heavy loss on investment, indebtedness and also the allegation of being used as vehicle to move money to certain individuals which includes the prime minister himself.

Where Are Things Now?

All these headwinds caused the local currency (Ringgit, MYR) to decline sharply making it the worst performer in Asia in 2015. The same goes to the stock market. However, improvement in oil price and investors' sentiment had pushed the Ringgit to be the best performer in Asia YTD. There is a potential that the rally could continue in the short term due to short covering and stable oil price.

The underlying economy remain resilience with GDP growth for 2016 expected to be around 4% - 4.5%, slightly down from last year's 5%. S&P, Fitch and Moody recently reaffirmed their "stable" outlook for Malaysia giving some needed confidence to investors.

Recent improvements in oil price and also dovish tone from the Fed has helped the KLCI to gain a mere 1% YTD. But the MSCI Malaysia ETF which tracks MSCI's own Malaysia Index gained more than 10%.

My Take On Malaysia

As mentioned, Malaysia's stock market is held captive by oil price and interest rate movement in the US. Both elements are hard to predict. But ultimately, earnings determine the value of a stock and the direction of the market. In the case of Malaysia, the relationship between earnings and stock market movement is depicted below.

I have to thanks and give credit to the local research house, MIDF Research for their extensive report on Malaysia's equity market which includes excellent observation regarding the behavior of foreign fund flow as well as corporate earnings with regard to the direction KLCI. 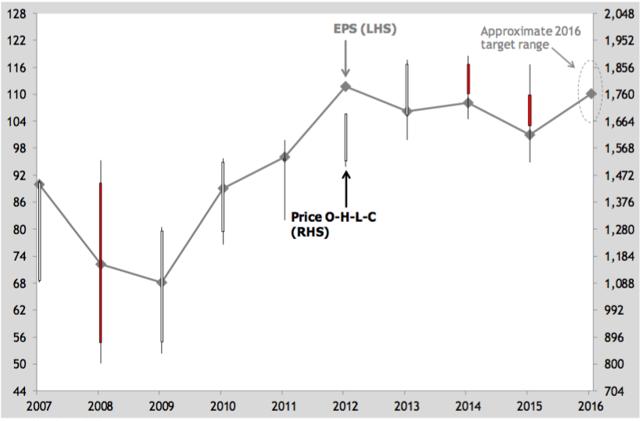 The earnings for the KLCI is expected to tick up in 2016 based on consensus from Bloomberg. The long term average PE for the local exchange is 15.3 and with upper and lower standard deviation at 13.7 and 16.9.

Using forecasted 2016 earnings and KLCI average PE of 15.3, the index seems fairly valued at current level of 1700. But during period of rising earnings, the benchmark could close at higher level compared to that based on average PE. So, using 16.9x PE (1SD from mean), the KLCI could close at 1800. However, absence declining oil price and uncertainty from the Fed, I believe the local benchmark could climb even higher.

The 1800 target level for KLCI implies a 5% return from current level. But unlike the SPDR S&P 500 (SPY) which closely tracks the S&P 500, the MSCI Malaysia ETF tracks the slightly different MSCI Malaysia index. As in the chart below, EWM price movement is more volatile compared to benchmark. It outperforms the benchmark in uptrend but underperforms in down trend.

So, it's difficult to make a direct comparison between EWM and KLCI. But when the KLCI was at 1800 back in June 2015, EWM was trading around $12 which will give 40% return if the ETF moved up to that level.

Some investors would ask, if the purpose of investing in Malaysia is simply to get exposure of emerging market for the sake of diversification, then why not buy the MSCI Emerging Market ETF (EEM)?

I have two reasons for why I would choose specific country ETF rather than buying EEM which contains more than 800+ stocks. First, when you have more than 800 stocks in the portfolio, it's hard to get a nice capital appreciation. Different stocks from different countries with different catalysts and economic conditions have to appreciate at the same time in order for the ETF to make meaningful gain. This is depicted below where EEM (orange) traded sideways from 2010 - 2015. Meanwhile, country specific ETF such as Malaysia pushed higher until mid 2014.

But of course, higher reward come with higher risk as proven by the price movement of EWM towards the end of 2015. However, this is where another advantage of country specific ETF comes into play. Investors should only buy something that they really know about. In this case, it is easier to study and follow the events related to a single country rather than the whole emerging markets. Those who did their due diligence could have certainly avoided being burnt by the 50% drop when the news about oil glut started to appear in the summer of 2015.

But if you insist on buying the whole emerging markets, why not consider Vanguard's FTSE Emerging Market ETF (VWO) for a lower fee and hence, better return?

For the year 2016, I think Malaysia's stock market would continue to be influenced mostly by oil price. If we assumed that oil price has bottomed at $30/barrel, then there is little risk for Malaysia even if oil traded sideways. Conservative estimate shows that the KLCI can reach 1800 level this year. But that is based on consensus earnings which could change for the better or worse. If price of oil and situation in China stabilizes, the 1800 target could be achieved. In this case, investors could take advantage by going long on EWM to amplify the gain.

The Fed's decision won't have a lasting influence. This is because usually, foreign fund sells on the news and then return as buyer after the news is confirmed. Also, the pace of rate hike is expected to be slower as monetary policy amongst developed nations continue to diverge. However, remember that the Fed is data dependent. Recall that most investors believe there will be no rate hike in 2016 after the November rate hike didn't happen. But they were forced to change their mind in December. In other words, I think the cost of future increase in US interest rate has been priced into most of the emerging markets and only unexpected moves from the Fed could bring further downward pressure.

As for 1MDB, the company is now in the process of selling its assets to pay down its debt. I believe 1MDB is not a hot news item anymore and that internal politics are less of a concern for investors.

I continue to hold my mutual funds in Malaysia and believe in the long term potential of the country. Malaysia is among the top 20 most competitive economies. The government, through its Economic Transformation Program has shown that the country is on the path to diversify its economy and reducing dependence on oil. The signing of the Trans Pacific Partnership agreement could further benefit Malaysia and its regional peers in the years to come. For investors with long term view, I think starting to build a position in EWM at its current level is a sound idea.

General Investment Research
219 Followers
The market is like a living organism. It has its own pulse, it moves, and it is dynamics. Now, perhaps more than ever, the market is filled with noise due to the inter-connectivity of the global economy and availability of information.  We tune in to the pulse of the market, top down, to provide you with market commentary, portfolio strategy and individual stock picks in easy to understand manner, focusing on what really matters. Seeking Alpha is our only medium and the best way to interact with us. Subscribe to get notifications on all of our publications.

Disclosure: I am/we are long MALAYSIA. I wrote this article myself, and it expresses my own opinions. I am not receiving compensation for it (other than from Seeking Alpha). I have no business relationship with any company whose stock is mentioned in this article.

Additional disclosure: I am not a registered investment advisor. The opinion expressed here is to help me articulate and inspect my investment thesis as well as to receive feedback from public. Investors should do their own due diligence before investing in the market.