Every time we see oil prices go up we hear that it will cause inflation and/or the economy will go into the tank.

... 7 out of the 8 postwar U.S. recessions had been preceded by a sharp increase in the price of crude petroleum. Iraq's invasion of Kuwait in August 1990 led to a doubling in the price of oil in the fall of 1990 and was followed by the ninth postwar recession in 1990-91. The price of oil more than doubled again in 1999-2000, with the tenth postwar recession coming in 2001. Yet another doubling in the price of oil in 2007-2008 accompanied the beginning of recession number 11, the most recent and frightening of the postwar economic downturns. So the count today stands at 10 out of 11, the sole exception being the mild recession of 1960-61 for which there was no preceding rise in oil prices. [Hamilton, 2009. Rv. 2010] 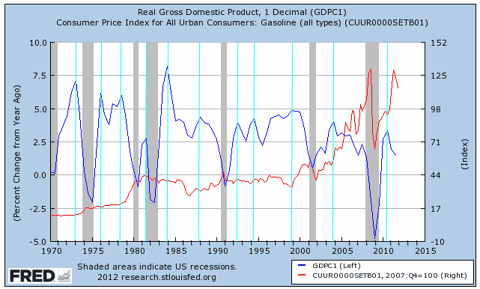 The above chart1 shows the peak of real YoY GDP percentage change (light blue lines) and the relative price of gasoline (red), the product that most directly affects consumers. If gasoline prices have been increasing prior to the peak, then there is statistical data showing that those prices may have had an impact on GDP. From that one might conclude that because oil prices were rising prior to the peak in GDP, and because GDP subsequently declined, then high oil prices may have caused a decline in GDP. (Because A happened and then B happened, thus A caused B?) Or, is it just a coincidence?

What we see in the data is coincidence rather than confirmation.

Take price increases of oil and gasoline. It doesn't cause price inflation (i.e., all prices rise). Instead it's a supply and demand thing. When OPEC jacks up oil prices, people spend more on gas and less on other things. The consumer goods they don't buy decline in price. Money is redirected by market forces to petroleum producers who are incentivized to discover and produce more oil. Ultimately, under normal circumstances, prices come down. This process is a bit distorted because we have a cartel-controlled market. But, if OPEC keeps prices too high, people reduce consumption, cartel revenues go down, and OPEC reduces prices to stimulate consumption. This is what happened in the current business cycle.

It is the same with recessions and oil prices. Each of the recessions we've had in the last 40 years can be adequately explained by causes other than oil/gas prices. For example, while oil/gas prices shot up prior to the 2008 Crash, no one suggests that was a cause of it. Rather we know that oil prices went up as a result of a fiat money fueled boom that drove up all commodity prices.

Looking at our chart, we can start with the 1973 - 1975 recession. That was the time of the Arab Oil Embargo (Oct. 1973 to March 1974). If the theory that high oil prices equals recession holds true then why did the economy recover when gas prices continued to rise post-recovery? What really happened was that the Fed cut interest rates by half in 1970-1971, and then started raising them in 1973 to combat rising prices. By the time the recession started in November 1973, the Fed Funds rate peaked at just over 10%. It isn't as if the oil embargo didn't cause disruption in the economy; it did, but most of the economic disruption was caused by the government's price controls and rationing. But it didn't cause the recession.

Prices fluctuated but remained in the $1.20s for most of the next eight years.

By 1999, the rise in gasoline prices coincided with peak GDP in late 1999 (Dec., $1.353) and gas prices rose, almost steadily since then. The 2001 recession came and went (March-$1,503) - November-$1.324). But, what else was going on? This was a time of incredible production and technological innovation that again benefited from the Fed's cheap money (spurred by Greenspan to revive the economy from the 1990 - 1991 recession). It worked. But Dot Com boom turned into Dot Bomb bust as the Fed raised interest rates and cooled the economy off from its "irrational exuberance".

The Fed decided it needed to stimulate the economy from the bust and from November 2000 to June 2004, the Fed lowered interest rates from 6.5% to 1.00%. From then on oil prices followed commodities prices and gasoline prices continued to climb.

Thus, while you can argue that rising oil and gas prices may have had some negative effects on the economy because of some economic disruption, in every case, the cause of our recession was anything but rising prices.

Regardless you are still going to hear that rising oil and gas prices are going to ruin the economy and cause us to go back into recession. While I believe the economy will decline starting in H2 2012, the reasons have nothing to do with oil prices. Don't let the pundits scare you with this economic fallacy. There is enough to worry about.

1. Note that gasoline prices (red line) are not scaled to prices, but are scaled to an index (100). The GDP scale (blue line) shows YoY percent change.

This article originally appeared in the Daily Capitalist.