While residential real estate experiences alternating booms and busts, farmland steadily rises in price, but rarely experiences a bust. While stocks, commodities, and other real estate were crashing in 2008, the price of U.S. farmland actually went up (gold and bonds were the only other two assets that managed to offer investors protection in the crisis). There was a slight decline in average prices in 2009, however. When stocks were stuck in a bear market between 1966 and 1982 with the Dow beginning and ending that period at 1,000 points, the price of U.S. farmland steadily rose the entire time. When commodities were in a bear market between 1980 and 2001, except for a few years in the 1980s, the price of U.S. farmland also steadily rose. The rate of price increases started to accelerate after that time. 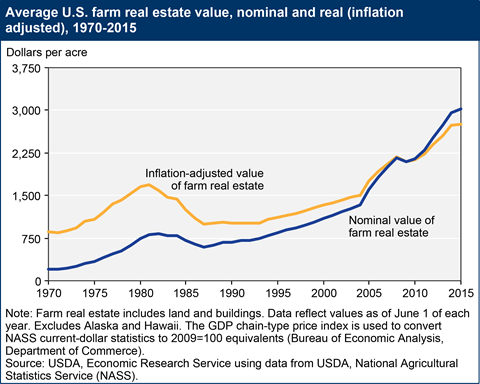 Farmland is a low risk investment that appreciates consistently and offers safety in times of crisis (it is sometimes referred to as gold with a coupon because it provides an annual return from rents). It performs well in both high inflation and low inflation environments. U.S. farmland had an average annual return of 12% over the last 20 years compared to about 9% for the S&P 500 and 7% for investment-grade corporate bonds (source: National Council of Real Estate Investment Fiduciaries). Compared to other real estate investments, maintenance costs and taxes are low. The supply of farmland is also continually shrinking - between 1982 and 2007, over 41 million acres of rural land in the U.S. was developed.

Buying farmland directly isn't as difficult as it may seem, although few urban investors would probably wish to pursue this option (I have owned farmland for over 20 years that is 2,000 miles away from where I live). The way to do so would be first to research the market and look for the regions of the country and type of land that offer the best potential investment returns. Land in the Midwest tends to be fully or even overpriced, so the bargains are found elsewhere. In the first decade of the 2000's, inexpensive ranch land in the West offered the best returns. Once you've found an area that seems promising, contact local real estate agents. Many agents in rural areas handle residential properties, commercial properties, and land. Half of all U.S. farmland is not listed with a broker, but is sold privately.

There are, of course, options other than owning farm or ranch land directly. Farmland REITs for the small investor first appeared in the U.S. in 2013 when Gladstone Land (LAND) IPOed. It was followed by Farmland Partners (FPI) in 2014 and American Farmland (AFCO) in 2015. Gladstone started with land that grew fruit, vegetable, and berries mostly in California and Florida, Farmland Partners with corn, wheat, soybeans, rice, and cotton, and American Farmland with crops similar to Farmland's, plus grapes, nuts and citrus. These REITS have yields of approximately 5.0%, 4.7%, and 4.0% respectively as of this writing.

They have tended to follow the price changes of commodities and not farmland, however, as can be seen in the price chart for Gladstone Land below. This may be because the IPO prices were too high, so prices have to settle lower first before it can track farmland prices. Until there is evidence of that happening, it is best to only buy them when their prices are below their IPO levels.

Investors are not limited to buying farmland REITs. High net worth individuals can always participate in hedge funds or partnerships such as Chess Ag Full Harvest Partners or Ceres Partners. These type of funds usually have high minimum investments in the six figures. An exception is the Agcaptia Farmland Fund VI (I to V are closed) in Canada, which has a minimum investment of approximately $5,000.

For the average investor, the other choices are buying stocks of companies that hold large amounts of land. Examples of these that trade on the U.S. stock markets are: Adecoagro (AGRO), Alexander & Baldwin (ALEX), Alico (ALCO), Consolidated-Tomoka Land Co (CTO), Cresud (CRESY), Limoneira (LMNR) and Texas Pacific Land Trust (TPL). Not all of these companies own land in the United States, so that needs to be taken into account. These stocks can be far more volatile than farmland and can also trade more like commodities than farmland. The chart of Adecoagro below shows that it has traded in the same direction as farmland prices in the last few years, but the price ups and downs are more extreme.

Farmland is one of the few safe haven investments that perform well in a crisis and during normal times. It can be a valuable addition to any portfolio. Like gold, it is not just an investment, but it's a form of financial insurance. Unlike gold, though, it has an annual return. Large portfolios should definitely contain some exposure to it. There are many ways to do so. Land can be bought directly, through REITS (more are likely to appear on the market in the future), by buying stocks of companies that own large amounts of land, and through partnerships and hedge funds.

Daryl Montgomery
2.83K Followers
Daryl Montgomery is the organizer of the New York Investing meetup, a 8,000 member educational group that provides the public with unbiased stock, bond, currency and commodity market information. For details, see: http://ow.ly/Y6CNhT (it's free to join). The group is the largest investing meetup in the world. It holds monthly general meetings, offers small classes on investing topics, has webinars and provides individual tutoring. Montgomery, a former professor and expert witness in court cases on data reliability (up to the Supreme Court), has written a number of books on investing and 800+ articles on financial topics. He was formerly the chief blogger for the "Helicopter Economics Investing Guide". He has done extensive research on optimal use of technical indicators. Montgomery has never worked for, nor has any association with any Wall Street company and this allows him to bring an independent perspective to market analysis.The New York Investing meetup's strength is in calling market turns. It called the top in gold and silver in March 2008 and the exact day of the oil bottom in February 2009 and almost the exact peak price in Silver in 2011. The New York Investing meetup now has a monthly market newsletter that provides a global analysis of stocks, bonds, currencies, and commodities. It can be purchased on a monthly basis.

Additional disclosure: I have owned farmland for over 20 years and have no intention of selling it.