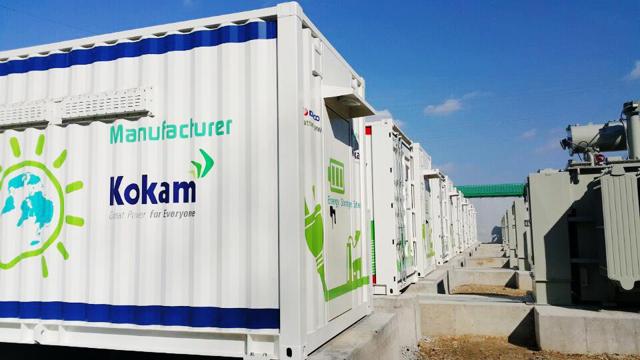 Sometimes technology creeps up on you before you realize what is happening. Then something happens to get your attention and you realize that things are changing fast. And so it is with batteries, the missing link in replacing fossil fuels with renewable energy.

Here I cover two areas of battery technology that are transforming power management at scale. The first comes out of left field as a solution to frequency regulation in power plants. The second relates to management of excess energy generated by solar and wind, followed by dispatch of that energy when needed. At its most extreme this role may involve near complete charge and discharge once, or even twice, in a single day, every day.

Late last month Kokam (XKRX:040480) a veteran Lithium ion South Korean battery manufacturer, announced the deployment of 3 high performance Lithium ion battery systems to provide 56MW of specialized batteries for frequency regulation in large power plants in South Korea. The batteries are: two Kokam Lithium Nickel Manganese Cobalt (NMC) battery systems with capacities of 24 MW/9 MWh and 16MW/6MWh, and a 16MW/5MWh Lithium Titanate Oxide (LTO) battery system. The LTO system was implemented first. While LTO technology is robust, with less dependence on temperature control, it is more expensive than NMC batteries and the specifications from the utilities often require temperature control (hence housing in containers which are cooled or heated). I suspect that NMC will become the preferred technology for frequency regulation.

South Korea is special in that it has a single power authority, KEPCO, which is largely responsible for managing the nation's power capacity. So it is possible for one organization to setup a national program to manage 65 GW of power capacity. This capacity is mostly coal powered (~47GW) but with substantial nuclear and hydro capacity (~18GW). There is a very small contribution of wind and solar renewable energy in South Korea.

Currently ~5% of the coal needed to run a coal fired plant is dedicated to frequency regulation, so having batteries take over this role is a substantial saving in coal used. More importantly the South Korean plans (within 2 years!) indicate one of the first examples of batteries assuming a central role in an aspect of power generation that has been seen as a fossil fuel role.

Clearly Kokam doesn't see South Korea as the only market for this role and they have pilot facilities (2-5MW) being reviewed in both Germany and the US. Kokam has the capacity to deliver 100's of MW of the NMC frequency regulation batteries at short notice.

There is a lot of interest in fast response Lithium batteries and a substantial system (2MW) was recently announced in the UK using Toshiba (OTCPK:TOSYY) Lithium Titanate batteries in association with energy company E.ON (OTCPK:E.ON) and it's wholly owned subsidiary Uniper at the Willenhall substation. E.ON also has a 10MW/2.5MWh battery system under development with Tucson Electric Power in Arizona. E.ON is shortlisted for a 250MW tender for frequency response storage in the UK and Kokam is involved in tendering, so Korea's implementation is being watched in Europe too.

These Lithium NMC and LTO batteries are also useful for peak load management improving power quality and reliability in solar and wind applications, and also for spinning reserve applications.

This is a big one, as you need a way to store and then access the intermittent power from solar PV and wind. Unlike the frequency regulation application described above, which needs fast, but short term response and high power delivery, energy arbitrage for solar and wind smoothing requires slower and longer term charge/discharge (up to over a number of hours).

The actual needs for energy management at scale are more varied than frequency regulation and so the actual configurations for batteries for this purpose are still evolving. It might be that the critical requirement is ramp rate control, or charge/discharge over hours may be more critical. Battery manufacturers are focusing in on their preferred configurations. For example Kokam has a High Energy NMC battery for energy management at scale.

For the technically minded here are a couple of links to give a sense of the kinds of lithium battery technology and how the different formulations behave. A good summary is here, and for those who want a deeper dive into lithium battery chemistry, here is a pretty up to date article.

There are surely many old mines, with tailing dams at the top and down below an open cut mine, that can be flooded. GW levels of power can be addressed in such schemes, but the capital costs are not small and they attract controversy because of their size. Two pumped hydro projects in California, Eagle Mountain and Iowa Hill, have been on this path for a long time, but capital and approvals are elusive.

This is happening at several levels. The easy one involves home solar PV systems linking with a home battery. Because it is a small cost (relatively) and the market is big (1.5 million homes in Australia have solar PV), just about all of the battery providers are interested. Here numbers matter as many small systems add up to a lot of power managed and it is managed locally (at the individual house level).

It seems that a 40ft container housing a 2-2.5MWh system is the scale for a number of utility energy management systems, but systems as large as 100MWh give a sense of the scale being implemented. Obviously a 100MWh plant would involve 40 x 2.5MWh 40ft containers.

There are now many multiple MW systems being installed for this kind of application. Kokam gives details of 12 of its systems installed in the US, South Korea and Australia that have more than 1MW power capacity. In 2015 Kokam alone installed 85MW of battery storage systems and 75MW of that capacity was larger than 1MW.

Substantial lithium batteries are also being adopted (along with solar PV) in remote and mining communities to partially substitute for diesel-powered systems. For example a remote indigenous community in Northern Australia is installing a 2MWh lithium battery storage system to store solar PV and take over grid forming functions from a diesel system. This will allow switchoff of the diesel system during the day as well as storing solar PV produced power.

Lithium batteries as part of a renewable energy project

Clearly renewable energy projects are considering including arbitrage, as there are various management functions that batteries do well, and holding the power generated to be delivered at a time when the value of the energy is greater may make sense. An early example of this kind of arbitrage involves Statoil (NYSE:STO) which recently announced a pilot 1MWh Lithium battery (technology not given) storage system to complement its Hywind Scottish floating 30MW wind farm.

However, there are other battery technologies for deep charge/discharge on a daily basis. While at an earlier stage of development, flow batteries seem well suited to this task. It is a race to see if flow batteries will get a place at the table or whether lithium batteries now have sufficient momentum to dominate the battery arbitrage space.

While it is too soon to see a lot of progress, there have been developments in each of the partnerships.

In 2015 in partnership with FLEX, manufacturing costs have been decreased by 15%, the lifecycle/longevity has been improved and cycle cost/kWh over battery lifetime decreased by 50%. Redflow will soon deliver an on-grid demonstration 0.1MW/0.48MWh flow battery system to Ergon Energy.

In addition to exploring remote markets around the world, Redflow is entering the Australian home battery market with a smaller offering. The Redflow share price has doubled since the start of 2016.

It is too early to know how the Imergy projects in India, China and Africa are proceeding, although the status of the Sun Edison (NYSE:SUNE) purchase of up to 1000 of Imergy's vanadium flow batteries for implementing in India could be problematic given the disaster that has recently befallen SUNE and news that it is not supporting its activities in India. The rumor is that Adani (IN:ADANIT) may be interested in SUNE's Indian projects.

Recently (end of February 2016) SUNE announced agreement with Ontario Independent Electricity System Operator (Ontario IESO) to supply an Imergy 5MW/20MWh system in 2017; this was to be SUNE's first large scale grid-connected energy storage project and it will need to be restructured with SUNE in difficulty. Imergy and Foxconn will need to think creatively about diversifying the route to market for their flow batteries.

At the end of the day there will be winners and losers and here sits the dilemma for investors. Is it still too soon to know which technology to back and which companies to invest in? Given the intense interest in frequency regulation I suspect that this market, will be satisfied soon by companies like Kokam and LG Chem who have done the hard yards on understanding Lithium battery chemistry. I suspect that for management of renewable energy it will end up a combination of pumped hydro, Lithium and flow battery technologies, with the latter becoming increasingly important.

What is abundantly clear is that all investors need to look carefully at their fossil fuel portfolios, as the complacency that the switch to renewable energy (with storage) is going to take a long time seems misguided in 2016.

Keith Williams
8.22K Followers
Keith began his career as a research scientist (developmental biology, biochemistry, molecular biology) at the Australian National University, University of Oxford (UK), the Max Planck Institute for Biochemistry (Munich, Germany) and finally Macquarie University (Sydney) where he held a Chair in Biology and established the Centre for Analytical Biotechnology. Pioneering the area of proteomics (with Marc Wilkins in his group coining the term), Keith established the world’s first government-funded Major National Proteomics Facility (Australian Proteome Analysis Facility) which was involved with industrialising protein science. Keith left academe with his team to found Proteome Systems Ltd in 1999 to commercialise proteomics. The company had a strong focus on intellectual property, engineering/technology and bioinformatics. As CEO he led the company to ASX listing in 2004. Since 2005 Keith has been involved in new business development in biotech, e-health and other emerging technologies. Keith sees climate change and sustainable development as a major issue for humankind and also a major business disruptor/risk and opportunity. Keith holds a Bachelor Agr Science from the University of Melbourne and a PhD from the Australian National University. He is a Fellow of the Australian Academy of Technological Sciences & Engineering and received an AM (Member of the Order of Australia) for services to the Biotechnology Industry. He has received various industry awards including an Innovation Hero Medal from the Warren Centre for Advanced Engineering. With 300 scientific papers and many patents written, Keith has a clear view of innovation in the Biotechnology and Climate/Renewable Energy space. He is not a financial advisor but his perspective adds relevance to decision-making concerning feasibility and investment in technology innovation.

Disclosure: I am/we are long ASX:RFX. I wrote this article myself, and it expresses my own opinions. I am not receiving compensation for it (other than from Seeking Alpha). I have no business relationship with any company whose stock is mentioned in this article.