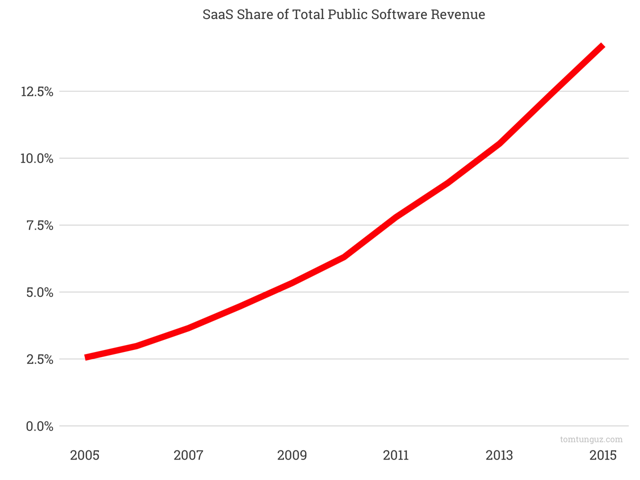 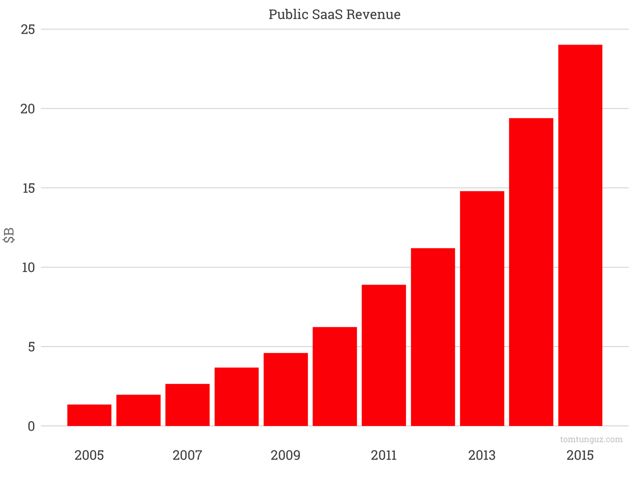 The growth rate of SaaS revenues follows a geometric growth curve ramping from $1.3B in 2005 to $24B in 2015. However, this revenue growth isn’t a consistent basket. It includes Concur’s revenue from IPO to 2014, when SAP (SAP) bought Concur. 2015 figures in this chart don’t include Concur’s revenue data, nor from any other take privates, or the SaaS businesses of traditional software companies like Oracle (ORCL) or SAP. In addition, this analysis excludes all private SaaS company revenue, both venture-backed and bootstrapped companies.

So the analysis actually underestimates the fraction of SaaS revenue today. Perhaps, SaaS products generated 20-25% of all software revenues, an astoundingly high figure. 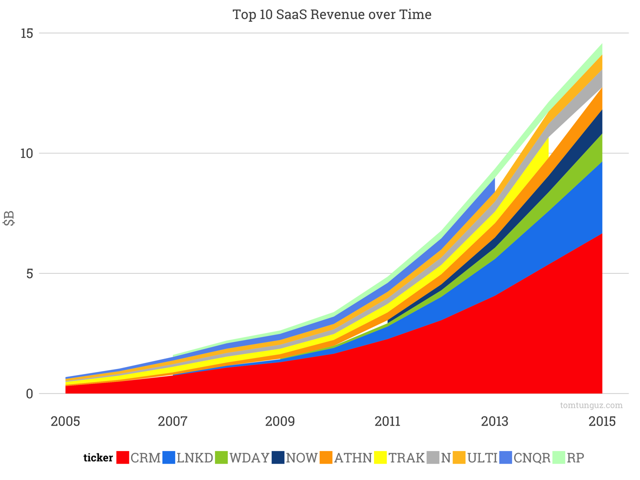 There’s no doubt SaaS has transformed and grown the software industry. We’re likely entering the middle era of SaaS. We have many platform companies built, significant market share shifting, but still quite a bit of opportunity and revenue to seize.

Tomasz Tunguz
354 Followers
Tomasz Tunguz is a Partner at Redpoint Ventures where he works with Axial, Looker, Electric Imp, Expensify, ThredUp, Quantifind and Erply. He blogs at www.tomtunguz.com Prior to joining Redpoint, Tomasz was the Product Manager for Google's Social Media monetization team, including the Google-MySpace partnership. In addition, he managed the launches of AdSense into six new markets in Europe and Asia. Before Google, Tomasz developed systems for the Department of Homeland Security at Appian Corporation, a provider of Business Process Management solutions. Tomasz also co-founded Perquimans Systems, a provider of bilingual, tri-currency automated time billing and document management systems for top tier law firms in Chile. Tomasz holds a B.A. in Mechanical Engineering, a B.E. in System Identification and Control Systems and Master of Engineering Management from Dartmouth College where he was a George Revitz Fellow. Specialties: Social networking, monetization, enterprise systems architecture, machine learning, business process management, mobile web