The US Treasury announced this morning that it will reopen CUSIP 912828N71 at auction on May 19, creating a 9-year, 8-month Treasury Inflation-Protected Security.

This TIPS originally auctioned on January 21 with a coupon rate of 0.625% and a real yield (after inflation) to maturity of 0.725%. I was a buyer of this TIPS at auction back in January, but a whole lot has changed in the ensuing four months.

CUSIP 912828N71 trades on the secondary market, so you can track its current real yield and price. Here is where this issue stands one week before the auction.

I Bonds, and why this TIPS investment makes no sense. I am speaking from the viewpoint of a small investor, not a big-money hedge fund or foreign central bank. You can go out today and buy an I Bond paying a fixed rate of 0.1% above inflation, and get the added benefits of a flexible maturity, tax deferral and better deflation protection. There would be no reason - NO REASON - to buy this a TIPS paying a real yield of 0.1% when an I Bond is paying the same fixed rate.

So, while TIPS yields have been falling, TIPS have also been getting more expensive versus nominal Treasurys. But I'd say the 1.60% breakeven means a 10-year TIPS is still 'cheap' by historical terms, as shown in this graph: 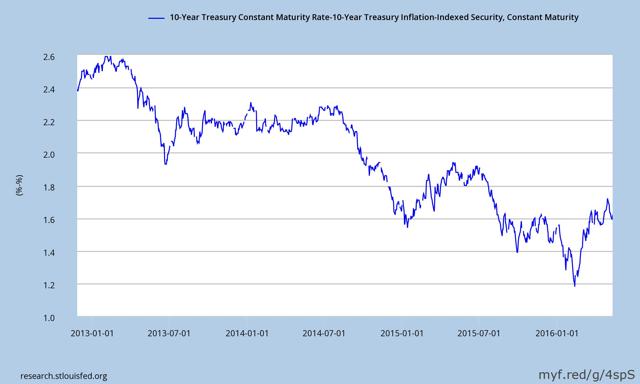 Inflation fears are obviously on the rise, especially as the Federal Reserve seems intent on weakening the strong dollar, which causes commodity prices to rise in dollar terms. We've seen gasoline prices rise gradually this spring, for example.

So if you are a big money investor, do you opt for a 10-year nominal Treasury paying 1.74% and likely to trail inflation? Or do you take the safer bet on a 10-year TIPS yielding 0.14% above inflation? TIPS are a popular investment right now, and that's why. Take a look at the 6-month chart for a the TIP ETF:

Since then, the trend has been up, as yields decline. Next Thursday's auction won't offer much for the small investor, but it could still turn out to be a big success for the Treasury. Here is a history of all 9- to 10-year TIPS auctions since 2009: 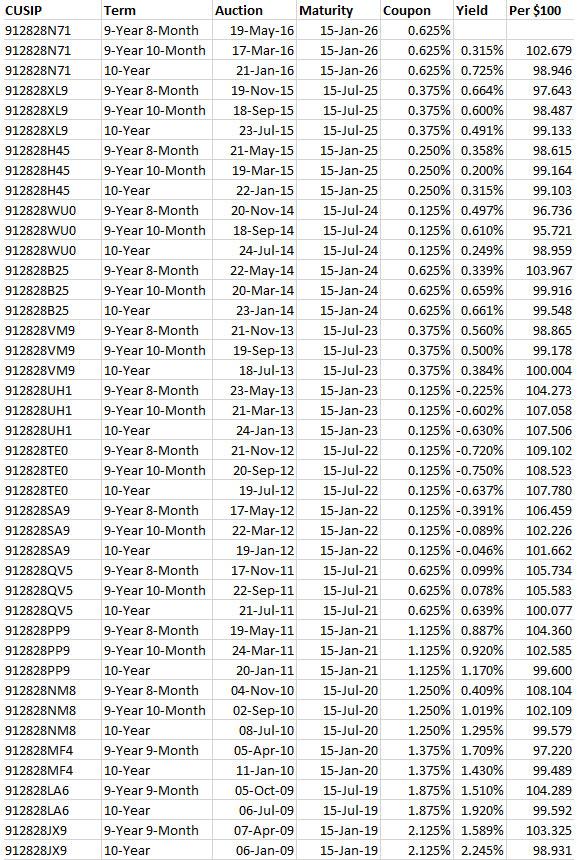 Additional disclosure: I own individual TIPS but no TIPS mutual funds.