After some very high profile disaster games, Glu Mobile (NASDAQ:NASDAQ:GLUU) has another opportunity with a new celebrity game. With the recent success of Tap Sports Baseball 2016, the mobile-game developer has the chance to finally rebuild investor confidence.

Even after the disappointing Q2 guidance, my question to investors was to figure out why one would sell the stock. With a large cash balance, a solid IP platform and a strong revenue base, the stock was too cheap to pass up. Now the question is whether the new Britney Spears game will provide a big catalyst for the stock. 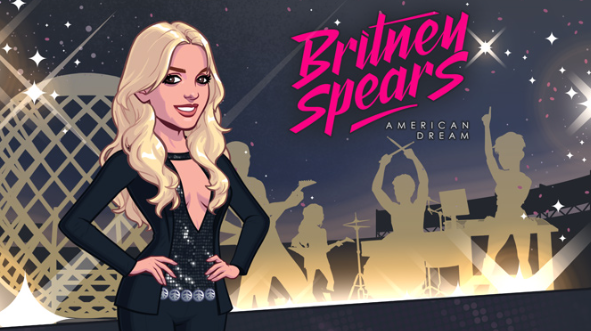 Is Britney Still A Big Star?

When Glu Mobile originally signed up a big celebrity lineup after the success of the Kim Kardashian game, the initial thought was that Katy Perry and the Jenner sisters were the big time acquisitions. Britney Spears is an aging star beyond her prime, but the company thought the older fan base might provide more discretionary cash for playing the game.

From a social media standpoint, Britney Spears doesn't stack up compared to the other celebrities in the lineup. At the end of April, Glu Mobile provided the following social media stats for their celebrity games. 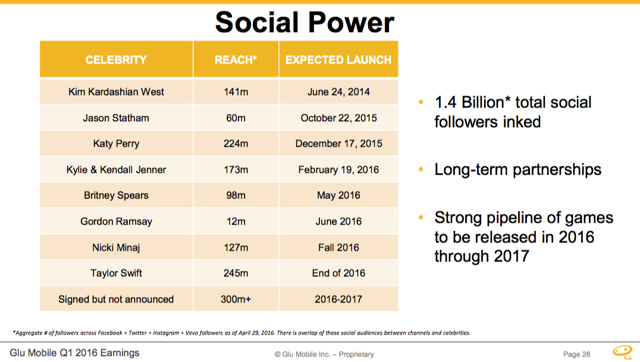 Of the 1.4 billion total social followers inked, Britney doesn't even reach the 10% level with 98 million followers. She trails far behind Katy Perry and Kylie & Kendall and even trails Nicki Minaj by nearly 30 million users.

So clearly Britney isn't the big star on social media that would probably typically indicate the amount of followers likely to play a mobile game, but the quality of the game and the ability of users to spend money are crucial as well.

The game is getting a decent level of downloads, but nothing like the previous Glu Mobile celebrity games. The question now is whether the game has staying power. Kendall & Kylie rocketed up the top grossing charts to only plunge when bugs hit the game.

Britney Spears: American Dream sits near the top in new installs on the iPhone sitting some 40,000 on the day from the top spot. The game though possibly peaked falling from the No. 3 spot the previous day.

Regardless of the ranking, Britney Spears: American Dream is only roughly 15,000 daily installs away from the levels achieved by Kendall & Kylie as the game sat in the No. 1 downloads and No. 8 top grossing.

With the stock trading below $2.50, a game like Britney Spears: American Dream is all gravy. Glu Mobile has a meager valuation of only $328 million and cash balance of $160 million. An enterprise value of roughly $168 million suggests an extremely low expectation for this game, if not all of the games.

As typical of Glu Mobile and CEO Niccolo de Masi, the mobile-game developer doesn't lack for new releases with potential for blowout numbers. The prime focus being Frontline Commando Rivals with an expected release towards the end of Summer. The remake of the WeFire game has many implications beyond even revenue with the large investments by Tencent (OTCPK:TCEHY).

Gordan Ramsay Dash provides another interesting concept to build upon the Cooking Dash franchise that produced $9.0 million of revenue during Q1. A celebrity like Gordan Ramsay might push that game to the next level.

The potential hits don't stop there with Taylor Swift at the end of the year, the likely release of an updated racing game from Cie Games and the investment in QuizUp.

The key is that all of these games provide catalysts for a stock not trading as if Glu Mobile has any potential to break the recent slump.

The key investor takeaway is that the expectations for the Britney Spears game are exceptionally low, but the case could be made for a solid run. Despite not achieving the initial download success of the Jenner sisters, the aging star wasn't far off their levels. The real question is whether Britney Spears has the staying power that other celebrities outside of Kim Kardashian have been unable to show.

Don't buy Glu Mobile for the newest celebrity game, but definitely own the stock based on valuation. If any of the new games become mega hits, investors will reap the rewards of buying low and riding the stock to new highs. If not, the cash balances and assets should provide for decent returns regardless.

Stone Fox Capital
37.92K Followers
Author of Out Fox The Street
Out Fox the market with misunderstood, high reward opportunities
Stone Fox Capital Advisors, LLC is a registered investment advisor founded in 2010. Mark Holder graduated from the University of Tulsa with a double major in accounting & finance. Mark has his Series 65 and is also a CPA.

Disclosure: I am/we are long GLUU. I wrote this article myself, and it expresses my own opinions. I am not receiving compensation for it (other than from Seeking Alpha). I have no business relationship with any company whose stock is mentioned in this article.