I'm still surprised by the lack of attention here in Seeking Alpha for Cardinal Health (NYSE:NYSE:CAH), as even though this is a major company, not a lot of authors (or readers) seem to care about the company's performance. Very surprising, considering CAH is quite a consistent performer! Back in the first quarter I said the company's weak share price performance wasn't warranted, and the stock moved up by 15% but now came back down to the same level we were previously trading at in January. Is it time to pick up some more stock, or has something changed? 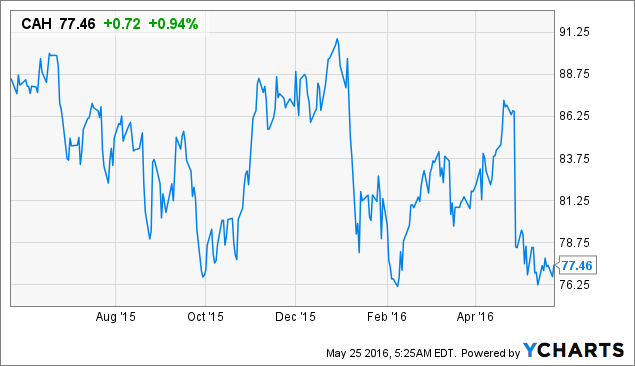 Cardinal indeed is one of the most consistent performers I'm aware of and that's not different in the most recent quarter wherein the company's revenue increased by approximately 20% (compared to Q3 2015) to $30.7B. The margins seemed to remain quite consistent as well, considering the gross margin increased by approximately 15%. That being said, the operating income was 'just' $656M in the third quarter which is just 10% higher compared to the same quarter in the previous financial year. 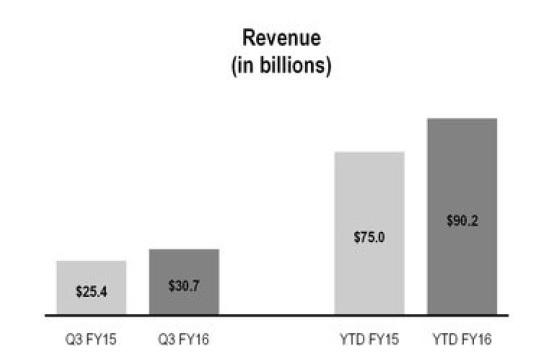 That did surprise me, but there are two relatively simple explanations for this. First of all, the expenses related to the recent acquisition were still weighing on the result (as the amortization and acquisition-related expenses increased by 40% to $108M, of which $54M was acquisition-related). On top of that, Cardinal also took a $5M litigation charge into account in the third quarter which was the complete opposite compared to Q3 FY 2015 as the company was able to recover $18M from its litigation expenses by then. Even if I'd keep the acquisition-related expenses, the adjustment for the litigation expenses (which obviously will always fluctuate on a quarterly basis) would result in an increase of the operating income of 15.4%, which is in line with the increase in the gross margin as well. 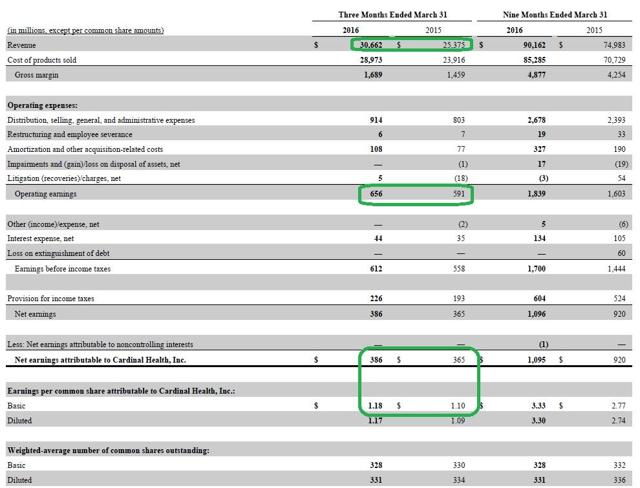 The net income in the third quarter was $386M, which brought the total net profit for the first nine months of the current financial year to almost $1.1B (up from $920M in the same period in the previous financial year). That's nice but doesn't really tell you the entire story. I have based my previous investment theses on the company's cash flow statements which revealed the company's adjusted free cash flow was actually (much) higher than the net income as the sustaining capex was much lower than the depreciation and amortization rate of the assets.

That seemed to have been confirmed in the 9M results as well, as the depreciation and amortization rate totaled $465M in the first nine months of the year, but the total capex investment was just $284M. That's quite the difference and this boded well for the adjusted free cash flow of Cardinal Health. 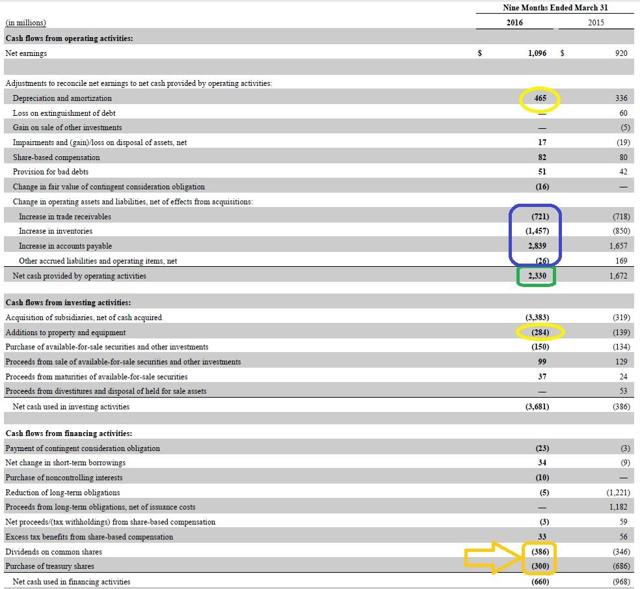 The share buybacks are continuing, but at a slower rate

Well, Cardinal Health is always spending it wisely, and that's one of the main reasons why I really appreciate this company. Instead of throwing the entire $1.4B out of the window, Cardinal Health took a look and went shopping. I previously discussed the company's $3.4B spent on acquisitions so it's not surprising a large part of the free cash flow was used to fund this acquisition, but buying another company is a one-time event. 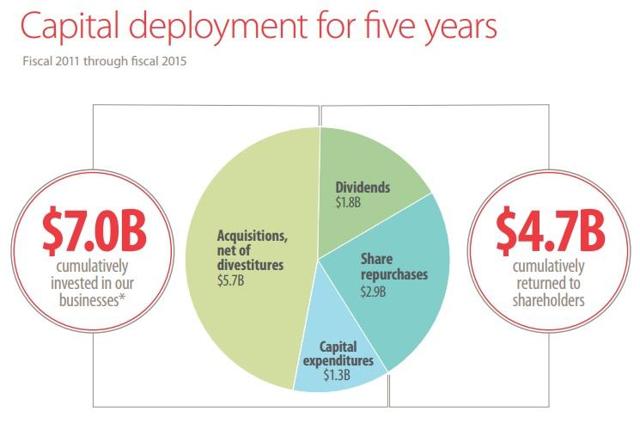 Instead, you should look at how Cardinal Health spends its free cash flow on a recurring basis, and then you'll see a lot of things you will like. The total cost of the dividend was $386M in the first nine months of the year, but as Cardinal has hiked the dividend by a stunning 16%, you should expect this cost to increase (based on 325M outstanding shares, the annual cost of the dividend will be approximately $585M per year), which would still leave $1.2-1.4B in free cash flow per year on the table. 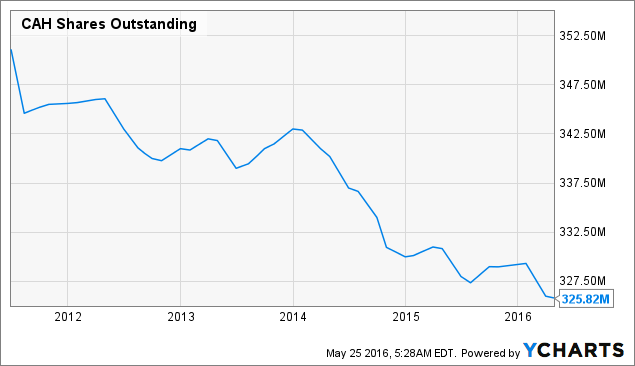 Cardinal Health has always been a huge fan of share buybacks to reduce the share count and improve the per-share performance and after taking a break whilst it was digesting the $3B+ acquisition, the share repurchases have recommenced in the previous quarter, and Cardinal bought back $300M worth of stock (approximately 4M shares, versus having spent $686M in 9M 2015). I do expect these buybacks to continue, and I would even hope the company will step up the buyback pace, considering the current share price is pretty low. Spending $1B per year on share repurchases would reduce the share count by 11-12M net (taking some option exercises into consideration as well).

Slow and steady wins the race, and Cardinal should be trading a bit higher than where it's trading at today. Q3 was pretty strong in terms of adjusted free cash flow (almost $500M), so even though my original target of $2B in adjusted free cash flow this year might not be reached, Cardinal Health's results will come pretty close (keep in mind the integration costs of Cordis totalled $54M in 9M 2016, and these expenses will be non-recurring in the longer term).

Assuming the $2B free cash flow target will be met next year (on the back of lower integration costs and interest expenses, as the net debt should start to trend lower again) and a net share count of 315M shares (now: 326M shares), Cardinal Health will generate a FCF/share of $6.4 and is now trading at a free cash flow yield of just over 8%.

That's a great achievement, and even though I already have a position in Cardinal Health, I will write some put options to try to get my hands on some stock at a lower price.

The Investment Doctor
18.21K Followers
Author of European Small-Cap Ideas
We zoom in on capital gains and dividend income in European small-caps
As I'm a long-term investor, I'll highlight some stockpicks which will have a 5-7 year investment horizon. As I strongly believe a portfolio should consist of a mixture of dividend-paying stocks and growth stocks, my articles will reflect my thoughts on this mixture.

Disclosure: I am/we are long CAH. I wrote this article myself, and it expresses my own opinions. I am not receiving compensation for it (other than from Seeking Alpha). I have no business relationship with any company whose stock is mentioned in this article.