A notable disconnect continues to exist in capital markets since the end of the financial crisis back in early 2009. The stock market has continuously levitated and stands once again on the brink of breaking out to a new all-time high. Yet for much of the post crisis period, money flows have been streaming out of domestic stock funds. This has been particularly true over the past 18 months. A most notable deviation to say the least, and it suggests that the stock market remains on a perilous perch from which it is bound to eventually break.

This relationship held both leading up to and throughout the financial crisis period. For example, from the start of the financial crisis in July 2007 to the market bottom in March 2009, stocks lost more than 55% of their value according to the S&P 500 Index (NYSEARCA:SPY). At the same time, domestic stock mutual fund outflows were heavy as would be expected at -$232 billion.

This historical relationship completely changed with the dawn of the post financial crisis period starting in March 2009. Since that time, the stock market has more than tripled from its lows and stands on the brink of new all-time highs. Yet during this incredible run, another -$644 billion flowed out of domestic stock mutual funds. Put simply, the stock market has soared at the same time that money has been continuously flowing out the door at domestic stock mutual funds.

A couple of counterarguments help explain this strong stock market performance despite persistent domestic stock mutual fund outflows. But they are insufficient to explain why this disconnect is likely to continue going forward.

The first would be the increasing popularity of domestic stock exchange traded funds (ETFs), which are effectively a substitute for domestic stock mutual funds. This indeed is true, but the money flows into ETFs is not sufficient to explain the difference (it should be noted that bond mutual funds have experienced net inflows of +$1.1 trillion since the outbreak of the financial crisis including +$70 billion since the start of 2014, so a "death of the mutual fund" industry argument also does not hold up). 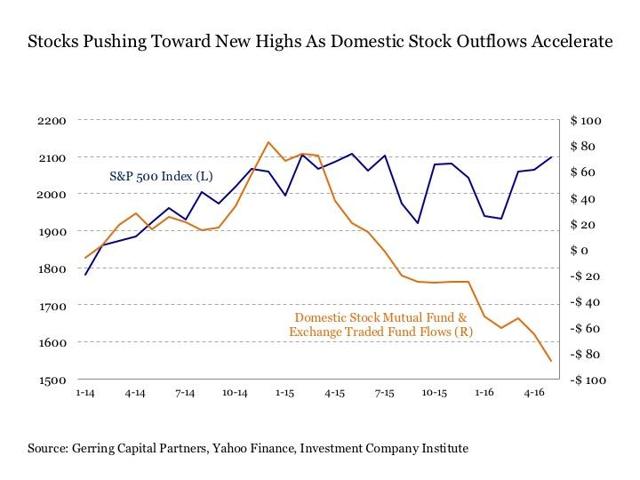 This is a troubling disconnect that does not bode well for the stock market going forward. For the longer investors continue to pull money out of domestic stock mutual funds and ETFs, the more difficult it will become for the broader stock market to defy gravity and maintain its gains.

Another explanation has been the extraordinary corporate share buyback activity during the post crisis period. Indeed, companies buying back their own shares has been an important source of demand and has helped to offset the steady outflows from the stock market that have come not only from domestic stock mutual funds but also major pension plans.

Unfortunately for the U.S. stock market, evidence continues to build that suggests this aggressive corporate buyback activity may be slowing going forward. Not only have announced corporate share repurchases fallen by nearly 40% so far in 2016 versus the comparable year ago period according to Birinyi Associates, but many larger corporations that have been tapping the debt market in recent years to capitalize on the low cost of capital and using the proceeds to buy back shares appear to be reaching exhaustion with such activity as they reach their limits in the amount of additional debt they are able to take on to continue these repurchases. And if the Fed remains intent on raising interest rates in the months ahead, this may further discourage further buyback activity.

The U.S. stock market is once again on the brink of breaking out to new highs. But it is increasingly running on fumes in doing so. Not only are underlying economic and financial fundamentals continuing to deteriorate at a time when valuations are running at historically very high levels, but money is now flowing out of domestic stock mutual funds and exchange traded funds at an accelerating rate. For those that are allocated to U.S. stocks, this is an increasingly troubling disconnect that has the potential to eventually resolve itself in a less than favorable way as the brittle perch upon which the market currently sits finally starts to break.

Disclosure: This article is for information purposes only. There are risks involved with investing including loss of principal. Gerring Capital Partners makes no explicit or implicit guarantee with respect to performance or the outcome of any investment or projections made. There is no guarantee that the goals of the strategies discussed by Gerring Capital Partners will be met.