Making investing mistakes is never a pleasant experience. Ideally, one could spend their entire investment career learning enough from others' mistakes that they didn't make any mistakes themselves. However, I've never met an investor who hasn't made some significant mistakes.

The good part about making mistakes (provided they aren't too big) is that if one can take the time to honestly assess what may have went wrong, then they may be able to prevent making a similar mistake in the future. Do this enough times, and one should be able to make less and less errors and eventually outperform the market.

Sometimes one can come out on the losing end of an investment without making a mistake. One can calculate that the odds are in their favor, be correct about those odds, and still have luck go against them on any given investment. So a single investment in isolation usually isn't enough to know if a mistake was made unless one's particular thesis for the investment was clearly in error. For example, if one thinks a company will beat earnings estimates and then the company misses estimates instead, then we know that an investment was probably a legitimate mistake. But in many other instances an investor probably needs a larger sample-size to assess if there might be something embedded in their investing process that is consistently contributing to errors.

I have been writing for Seeking Alpha for about nine months now. During that time, I have made 19 recommendations. Seventeen of them made money or are currently in the green, and two of them are currently in the red. In this article, I'm going to examine one of the ones that is in the red: Gilead Sciences (GILD). The goal of examining this mistake is to see if there is something I can do better in my investment process that will help prevent me from making this type of mistake in the future.

At the beginning of 2016, I included Gilead along with two other companies as part of three stock picks that I thought had good prospects over the course of the next 24 months. The beginning of 2016 was an interesting period because at the time I wasn't finding much value in the market and the three picks I made were stocks that I already owned, but they were also stocks I thought were still good buys at that time. I had actually purchased Gilead during the September 2015 sell off for $96.05. When I recommended it in January, the price was $98.01.

January of 2016 was a fairly significant transition time for me as an investor. I had spent several months working on a cyclical value investing process (rather than a more traditional value approach) and by February I had enough confidence in the new strategy to begin using it as my primary process for finding investments. I was also developing a model portfolio that included weightings along with stock picks in order to help better track performance. In addition to this, I was transitioning my personal accounts so that they were in-line with my investment recommendations. By February I had stopped making short recommendations, I had aligned my long positions with those in the model portfolio, and raised a fair amount of cash so that if opportunities presented themselves in the future I could invest in every idea I wrote about.

Here are how the three investments I made on January 3rd 2016 have performed vs. the SPY over the same time period: 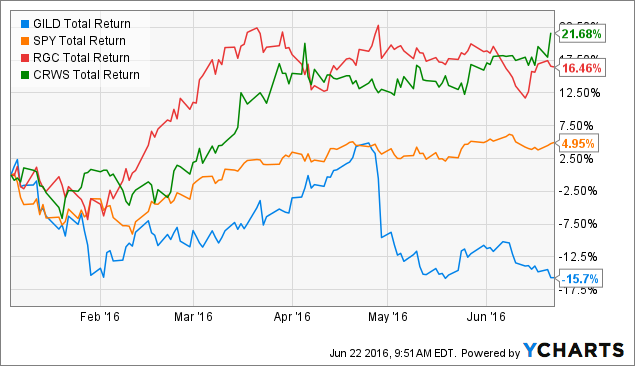 What went wrong with Gilead?

First, I should point out that the thesis I had for Gilead is not yet broken. I thought that Gilead was roughly fairly-valued-to-under-valued at $98.00 and that when it made an acquisition that the price would go higher (probably to around $120.00), and that in the mean time Gilead would buy back a lot of shares with the cash they were generating. I gave the investment a 24 month time horizon. It has only been 6 months, so there is still time for the thesis to play out, but even if it does so, I have recognized two mistakes I made with Gilead already that I will try not to make in the future.

The first mistake I made had to do with the weighting I assigned Gilead of 6%. At the time, most of the picks I was making were in the 2% range, and once I started buying cyclicals the initial weightings were lowered to 1%. This means that relative to my other purchases, Gilead was assigned far too big of a weighting. This is partially forgivable because I wrote about Gilead before I shifted strategies and at that time I was finding relatively few investments using more traditional approaches. I was also holding a large amount of cash. However, that excuse was not valid by late April of 2016 when Gilead's stock price had fallen and then recovered. I was too distracted by the recovery of the price to think about reducing the weighting from 6% to a more reasonable 2%, given my new investment strategy and size of my other investments.

If the stock price recovers again, I will make this adjustment.

I think the lesson to be learned here is to always be aware of any changes you are making in your overall strategy and adjust all of your holdings accordingly when you are given the opportunity by the market.

The second mistake I made has more broad implications for future investments. That mistake was not including a large enough margin of safety in my initial purchase of Gilead. I read a couple articles at the time of purchase whose authors thought Gilead was fairly valued in the $90-100 price. Upon reading those authors, I remember thinking "That sounds reasonable."

This should have been a warning sign for me. I should never buy any value investment at or near fair value because, even taking a possible future catalyst into account, there is little margin of safety in the case that I was wrong, and only downside if the catalyst doesn't materialize. Margin of safety is something that I have been thinking quite a lot about lately and I recently wrote an article titled Responding to Margin of Safety Myths in which I do some explaining about how I approach MOS in my cyclical value investments.

In order to determine the MOS for cyclical value investments I measure the distance between a previous market price which occurred under relatively normal conditions and the current price. The percentage difference between the two is what I consider the MOS (for more details on this, read the article linked to above). When I use this approach for cyclical stocks I calculate the MOS for each stock separately, but I also have a hard minimum of 33%. So, if a stock recently saw a high of $100, then I wouldn't have an adequate MOS, using this approach, unless the stock was now $67 (and all my other conditions were met). Usually for cyclicals I require a much higher MOS, but it is always company specific, with a hard minimum of 33%.

In order to try to reduce mistakes like the one I made with Gilead in the future, I'm going to add 30% MOS threshold to almost all my future value investments whether they are cyclical or not. In the case of Gilead, that would have produced an entry price right about where the price sits today (instead of an entry point in the upper 90s)

Just out of curiosity, I thought I would see how this may have applied to the one other investment idea I have that currently in the red: Foot Locker (FL) 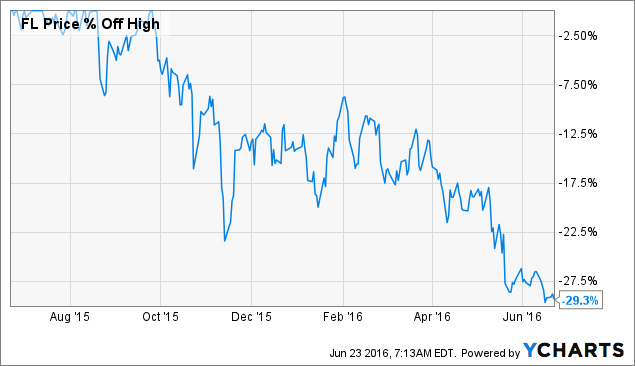 Again, just a tick or two lower, and Foot Locker will meet the 30% threshold as well. (I bought at the bottom of the big spike down in November, so I did have a decent MOS, but just not enough.)

Every other value investment I made and recommended passed this threshold, and every other investment idea is in positive territory. Obviously, this 30% level of MOS isn't enough on its own to warrant investing in any particular stock. There are plenty of stocks down 30% that will eventually go to zero or never recover. But at least when it comes to the type of stocks that meet my other value criteria, there is at least some evidence that I would be better off having a minimum 30% discount to a stock's previous high.

It can be difficult to (1) admit when you have made an investment mistake. One of the reasons I always attach a hard time-horizon to each of my investments is so that I am less likely to fall into the trap of thinking that if I just give an investment enough time, then it will rise. I always want to have some specific point I can look at an investment and examine if it made money or lost money, and whether or not it outperformed the S&P 500. After I determine whether or not I made a mistake, then I can (2) try to figure out what it was I did wrong. If I can identify where I went wrong I can then (3) try to figure out if there is some change I can make in my investment process that will reduce this kind of error in the future.

I have tried to take all these steps in my examination of my Gilead mistakes and I have made a couple changes to my process going forward. Hopefully these changes will reduce future errors.

Disclosure: I am/we are long FL, GILD. I wrote this article myself, and it expresses my own opinions. I am not receiving compensation for it (other than from Seeking Alpha). I have no business relationship with any company whose stock is mentioned in this article.