The U.S. dollar index, or DXY, a weighted index of the value of the U.S. dollar relative to a basket of six major currencies, has bounced 3.47% from its low on June 23 when the British unexpectedly voted to leave the European Union in a non-binding referendum, known as the Brexit vote. Other currency pairs, including the GBP/USD and EUR/USD, took hits of 13.49% and 2.45%, respectively, during the same period, while the Japanese yen and gold have surged 4.15% and 8.1%, respectively, against the U.S. dollar as investors are rushing into safe haven assets. 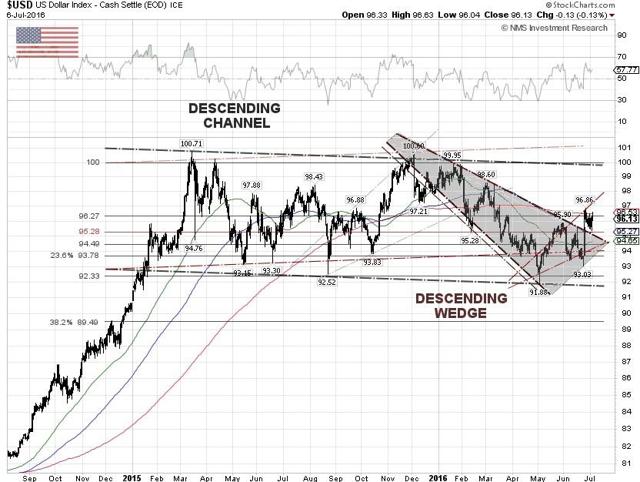 Just two days after the June FOMC meeting, Mr. Bullard, a voting member of the FOMC, told CNBC that low growth and a very low Fed funds rate, of just 63 basis points, will likely remain in place through 2018. That is a major policy shift since Mr. Bullard's opinion in late May was that the U.S. labor data suggested it was time to pull the trigger. More dramatic was Fed Chair Janet Yellen's semi-annual testimony a week after the FOMC meeting, when she told Congress that she was decidedly less optimistic about the outlook for the U.S. economy and the prospect for higher U.S. interest rates than she was in the previous month.

Other Fed officials, such as Cleveland Federal Reserve President Loretta Mester, did not seem shaken by the weak May jobs report, as she thinks that we aren't at the start of a significant reversal in labor markets, according to the MarketWatch. Ms. Mester told the audience in a speech to a business group in London just last week that, "Waiting too long (for the next rate hike) increases risks to financial stability and raises the chance that we would have to move more aggressively in the future, which poses its own set of risks to the outlook." 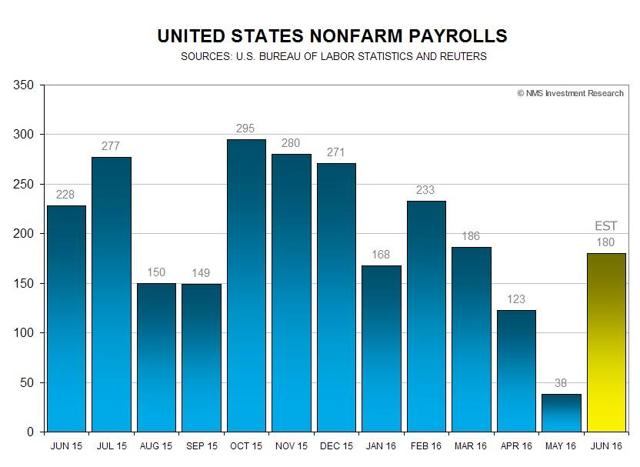 The U.S. nonfarm payrolls report for June 2016 is scheduled to be released on July 8, at 8:30 A.M. Eastern Time. A Reuters survey of economists forecasts jobs rose 180,000 in June. A disappointing nonfarm payrolls figure could send the U.S. dollar index back into the descending wedge chart pattern. In early June, the U.S. dollar index sharply dropped 1.6% when the Department of Labor announced that there were only 38,000 jobs added in May, far worse than Wall Street economists' forecast of 155,000 jobs.

IMF Doublespeaks About the Dollar and the U.S. Economy

The International Monetary Fund, or IMF, said on June 22 that the U.S. economy was "overall, in good shape,", but decided to revise the growth forecast downward to 2.2% in 2016, after subpar GDP growth of 2.4% in 2015. The core personal consumption expenditures, or PCE, index, excluding food and energy, is expected to rise 1.8% in 2016, compared to a gain of 1.4% last year.

The IMF said in a released statement that,

At today's levels of the real effective exchange rate, the current account deficit is expected to rise above 4 percent of GDP by 2020, pointing to the U.S. dollar being overvalued by 10-20 percent.

From the IMF's viewpoint, the U.S. dollar index should be in the range between 77 and 86 to warrant U.S. economic conditions.

There are warning signs that the U.S. economy may not be as strong as Federal Reserve and economists have painted it to be, as job growth is decelerating while the core PCE index used by the Fed to measure the inflation, continues to run below the Fed's 2% inflation target.

The recent Manufacturing Business Outlook Survey by the Federal Reserve Bank of Philadelphia, also known as the Philly Fed, showed the manufacturing index ticked higher in June, but the employment index, which remained negative for the sixth consecutive month, plunged from -3.3 in May to -10.9 in June.

Recession Fears are Rising as Yield Spread is Narrowing

The yield of the 10-year U.S. Treasury Note has dropped below the July 2012 low of 1.43% and is now entering "no man's land", as recession fears are growing. The yield spread between the 10-year and 2-year U.S. Treasury Notes, one of the economic indicators, has narrowed to 0.80 percentage points, the level not seen since late 2007. Narrowing spreads may indicate worsening economic conditions in the future, resulting in a flattening yield curve. A very low or negative spread could signal an upcoming recession. Since 1960, each time that the yield spread went negative, a recession followed approximately 12 months later. 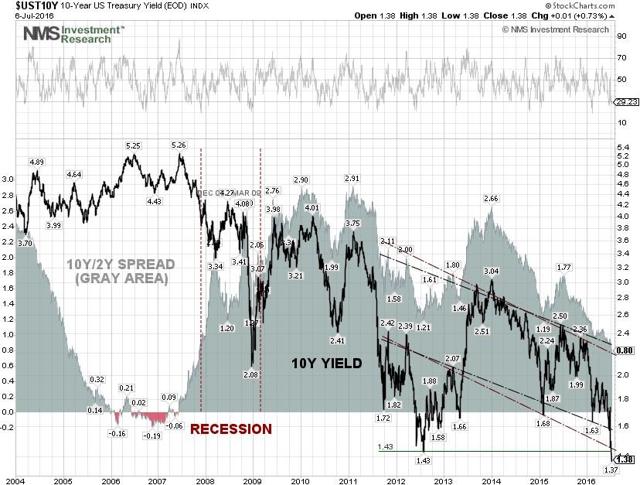 Analysts at Deutsche Bank, led by Dominic Konstam, issued a warning this week that the recent flattening yield curve suggests a 60% chance of a U.S. recession occurring in the next 12 months, the highest probability of an economic contraction since the financial crisis of 2007-2008.

The yield spread between the 10-year and 2-year U.S. Treasury Notes has been on the decline since it peaked in December 2014 at 2.66 percentage points, two months after the FOMC decided to end the quantitative easing program. Soon after, Wall Street economists stepped up their speculations about the timing of the Fed's first rate hike and sent fear to the bond market, which had already driven the 10-year and 2-year U.S. Treasury Notes yield spread lower.

From a historical perspective of the Fed leading up to the last U.S. recession, from December 2007 through March 2009, the Fed began hiking the short-term rate from 1.0% to 1.25% in June 2004 as the yield spread between the 10-year and 2-year U.S. Treasury Notes stood at 1.9 percentage points. By the time the Fed raised the key rate by a quarter-percentage point to 5.25% for the last time in June 2006, the yield spread was already in negative territory.

Many Wall Street economists may not be aware that the S&P 500 Utilities sector is now trading near its all-time high, as money has rotated into safe-havens. The last time Utilities outperformed the broader market, a U.S. recession followed.

Concerns about the weakening U.S. and global economies and the Bank of Japan's, or BOJ's, negative interest rate policy, as well as the Brexit vote aftermath, have put buying pressures on the Japanese yen and gold as safe-havens and selling pressures on the U.S. dollar. Both the JPY/USD exchange rate and gold prices, which show a positive correlation (+0.78) over a 100-day period, have been on the rise since December last year, despite weak gold demand in India and China. This trend could continue into the future as the Bank of Russia and the People's Bank of China are shifting away from the U.S. dollar to gold. 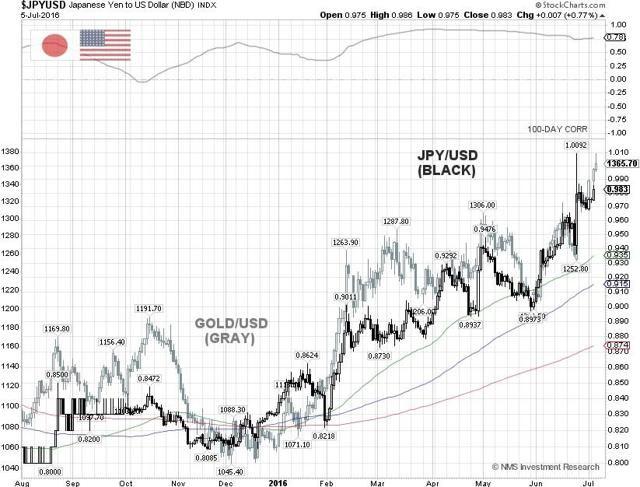 From our technical viewpoint, the USD/JPY has fallen about 7% since late May and bounced at the key trendline supports at 103.58 yen. The currency pair broke down through the 100.67 support, or the 50% Fibonacci retracement level, and immediately bounced back above the 100 level after the Brexit vote. In a note published in the Financial Times on June 17, Alan Ruskin, the New York-based Global Head of G10 FX Strategy at Deutsche Securities, said the BOJ would likely step in if the dollar "threatened or breached" the 100 yen level. 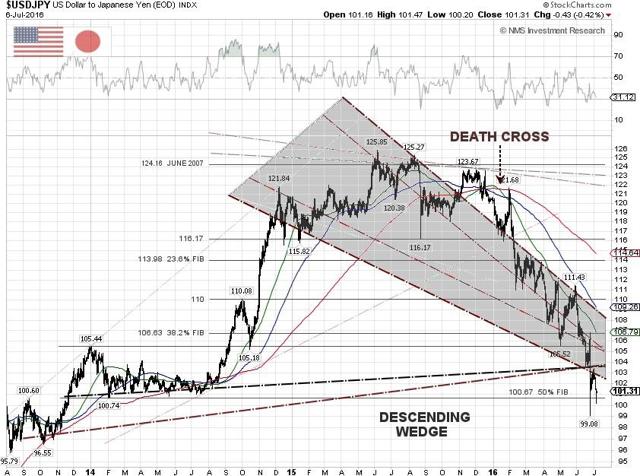 The BOJ would likely intervene 'under the cover' of the U.K. referendum vote, by making a strong case to the U.S. and G20, that i) Japan is being placed under unique duress from a dramatic tightening in financial conditions allied to the stronger yen; and, ii) that the exchange rate is reflective of volatile international events, and not domestic conditions.

A yen intervention by the BOJ won't work when the USD/JPY exchange rate and the yield spread between the 10-year and 2-year U.S. Treasury Notes are directly correlated, as currency traders will sell the U.S. dollar and buy yen when the U.S. Treasury yield spread is narrowing. The last intervention by the BOJ was in August 2011 when the bank sold a record 4.5 trillion yen and bought U.S. dollars, causing the yen to tumble temporarily. But a week later, the currency was back above its levels before the intervention. 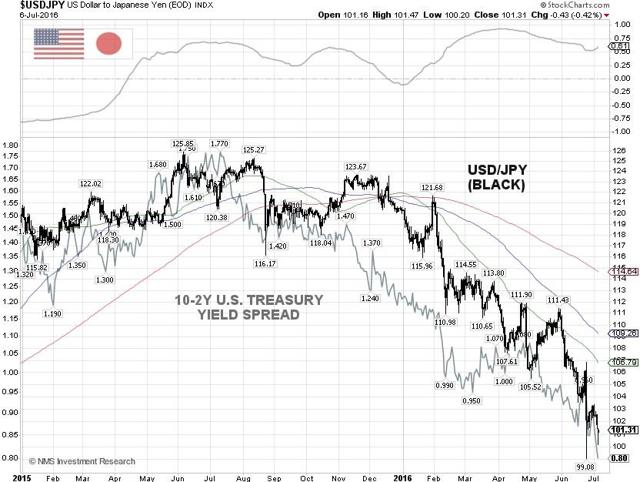 In May, the U.S. Treasury issued a stern warning against any action by the Japanese government to weaken its currency, as there should be no disorderly trading in the yen that would justify intervention. One month earlier, the U.S. Treasury placed Japan, as well as China and Germany, on a new currency watchlist, warning that all three faced extra scrutiny and potential retaliation by Washington, as a result of concerns over growing imbalances in their trade relationship with the U.S. 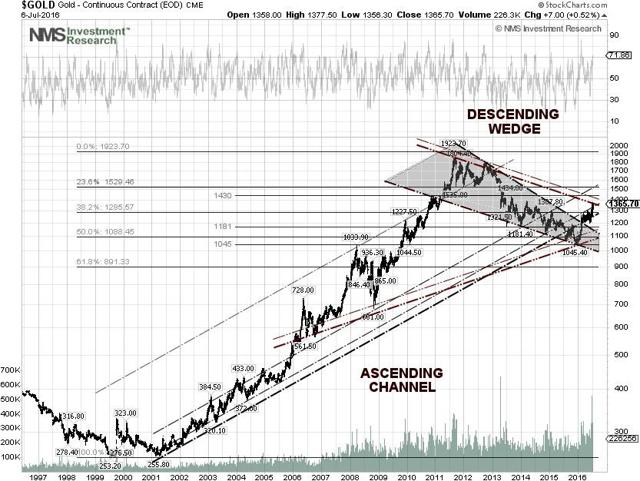 The gold price bounced off its December low of $1,045.40 per ounce and broke out the bullish descending wedge chart pattern in February. Gold has now broken out the 38.2 Fibonacci retracement level at $1285.57 and is bumping into the trendline resistance at $1,358.70. If the yen continues to gain strength, gold could follow and head to the $1,430 resistance level, followed by the 23.6 Fibonacci retracement level at $1,529.46. As demand for gold as a safe-haven asset remains, more selling pressure will put on the U.S. dollar.

The U.S. dollar index has bounced from its low on June 23 when the British unexpectedly voted to leave the European Union. Without the Brexit vote, the DXY would have fallen further amid signs of a weakening U.S. economy and rising recession fears along with the flattening yield curve. The U.S. dollar index could be set for a crash if the June nonfarm payrolls report disappoints and investors continue to rush into safe haven assets, such as the Japanese yen and gold.

Ed Wijaranakula
523 Followers
W. (Ed) Wijaranakula has been a portfolio manager for over 15 years. He has a Ph.D. in Electronic Materials and has worked with Intel, Taiwan Semiconductor, Texas Instruments, and other tech companies in the Silicon Valley, during his professional career. He was also involved with industry research projects at MIT, NC State and the University of Washington. His investment research expertise includes biotech, commodities and currencies. He has published over 800 articles and holds 14 U.S. and international patents. Tweeter @wijaranakula