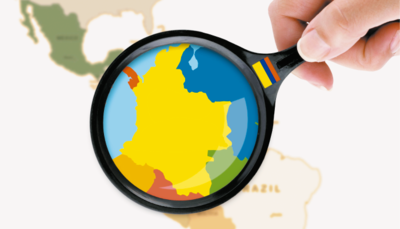 In January 2011, Colombia's president Juan Manuel Santos first openly manifested his administration's desire to have Colombia become a member of the Organization for Economic Cooperation and Development (OECD). Over five years later, Colombia seems to finally be in the closing stages of the process that will, if successful, make them the 36 th member of the club encompassing the world's most(ly) developed countries and the third Latin American country in the organization (Peru is now in the initial stages of its own bid for membership).

Colombian government officials have often justified this pursuit on the grounds that OECD membership will result in a boost in international confidence in the country's economic prospects, and therefore will help usher in foreign investment -with an often explicit claim that competitiveness and growth upticks will follow. However, public opinion within Colombia is not unanimously sold on the idea that their country will reap benefits from joining a group of nations that they view as very different from their own. The question then is clear. Does joining the OECD indeed generate benefits for a middle-income Latin-American country such as Colombia?

As it turns out, history provides two close examples of just such countries which have already found themselves where Colombia now stands. Mexico, which joined the organization in 1994, and Chile, which was welcomed in 2010, are currently the only two countries in Latin America to hold OECD membership.

What positive impact, if any, did OECD induction have on the macro-economic outlook of these countries? Let's first look at Foreign Direct Investment (FDI). Both Mexico and Chile displayed an increase in FDI inflows after their induction to the OECD. However, these increases could respond to other changes in the countries' economic environment, such as inclusion to NAFTA in Mexico's case and the commodity boom in Chile's. 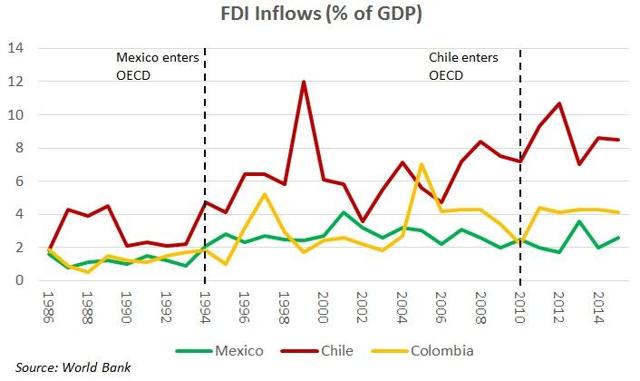 Another indicator one might think would be positively impacted by an improved investor perception is interest rates on the countries' sovereign debt. Again looking at the cases of Mexico and Chile (five years before and after each country's induction to the OECD) we see some evidence to support this idea. For Mexico, we observe a sustained decrease before and after induction, interrupted by a spike which can be attributed to the 1994 economic collapse. In the case of Chile, again we observe a decrease in average interest rates interrupted by a spike corresponding to the 2008 global crisis. As for Colombia, interest rates have actually increased over the two years since the formal accession process began, which reinforces the idea that the effect of impending OECD membership, if any, is overtaken by other underlying economic trends. 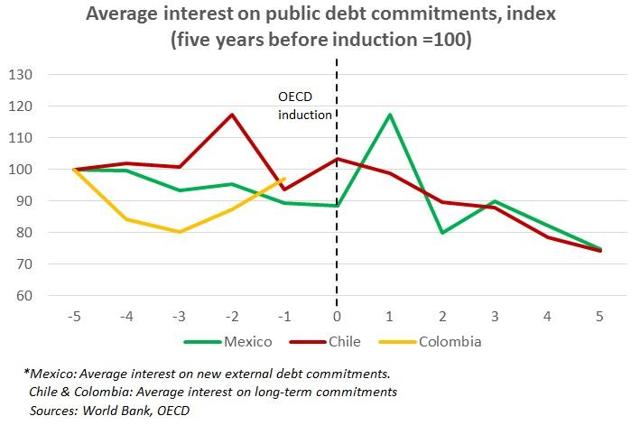 As for the hopes of a positive effect on overall growth rates, neither Mexico nor Chile present encouraging evidence. Mexico's per capita GDP growth has been disappointing at best in the period following 1994, at an average rate of 1%, whereas in the 5 years following its inclusion Chile's has plummeted from over 4% in 2010 to 1% in 2015. Colombia, although still showing better performance than either Mexico or Chile is also on a downward trend. There are other powerful determinants at play, but the evidence does not induce optimism. 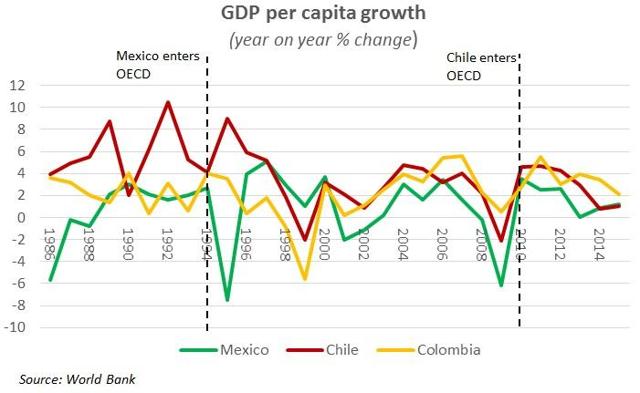 When trying to draw inferences from past experiences to think of the present Colombian accession process, it's important to remember that it is entirely possible that the improvements in the macroeconomic environment in Mexico and Chile are reasons for their inclusion in the OECD, and not consequences of it. One must also bear in mind that Mexico's induction came months before the outburst of the Tequila crisis, and Chile's happened in the cusp of the rebound from the 2008 global recession, while Colombia's inclusion seems to come at a time when the country is undergoing a period of mild deceleration. Taking these contextual differences into account, the evidence for (or against) a positive impact on macro-economic indicators seems less than robust.

If macroeconomic benefits are unclear, does that mean that pursuing inclusion to the OECD is a fool's errand? Not by any means. Accession to the OECD may be thought of as a three stage transformational process for a middle-income country. First as a transparency exercise, a profound diagnostic process during which countries have to subject themselves to intense external scrutiny; second, as a window of opportunity during which governments will have the capacity to leverage the OECD's entrance pre-requisites to push forward liberal programs and reforms in key sectors such as education, environment, public finance and governance, among others; and third, and maybe most important, as a long term commitment mechanism to adhere to the values the OECD promotes, from which support of "open and transparent market economy principles" stands out. Given the current political volatility and a protectionist rhetoric taking hold in many parts of the world, to which several Latin American countries are no strangers, this is not a commitment to be readily dismissed.

When it comes to Latin American economies joining the OECD club, the act of going through the acceptance process can turn out to be as beneficial as the membership itself. 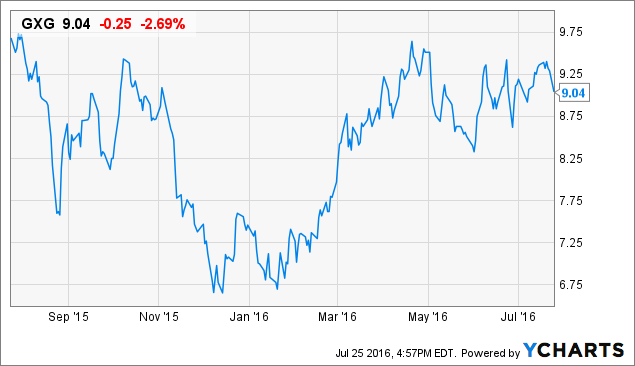