The Valeant (NYSE:VRX) saga is familiar to anyone who has been following the financial news over the past year: issues regarding its business practices in the latter half of 2015 led to a huge selloff in the stock, which was followed by an even larger selloff after a major deterioration in Valeant's business performance was revealed in the two most recent earnings reports. To date VRX is down around 90% from its 2015 high.

Valeant's growth by acquisitions strategy resulted in a substantial debt load. The deteriorating business performance over the past half year has raised questions about whether Valeant will be able to continue managing its debt load in future. EBITDA is currently pushing up against the limits allowed by the debt covenants. While the situation is manageable at present, any further major deterioration in business performance will likely push Valeant over the edge and make its survival unlikely. Thus, Valeant currently has its back up against the wall. The key question now is whether the bottom is in for its business or whether further declines await.

In situations like this, where the company's continuing ability to manage its debt is in question, it makes sense to pay close attention to what the bond market is saying. It is also interesting to compare its message to the one coming from the stock market. Bond investors are regarded as 'smart money', so a less negative message from them may indicate an overreaction in the stock price and hence a buying opportunity based on mispricing of risk vs. reward.

As an illustration of bond distress, the figure below shows the yield over the last 3 years for a bond of the mining company Freeport-McMoRan (NYSE:FCX): 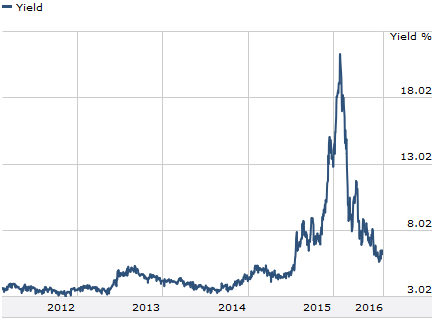 The yield reached more than 20%, a very distressed level, in January this year when it looked like global demand for commodities was falling off a cliff. The bond price reached almost 40 cents to the dollar. It has since returned to non-distressed levels.

FCX is an interesting company to compare to VRX in this context. They are both highly leveraged, with similar debt to EBITDA multiples ~6x, and both have valuable assets that should put a floor under their bond prices in cases of distress. The bonds of both companies are below investment grade, although FCX bonds have better ratings than VRX's. A further similarity is that FCX shares also sold off by ~90%, from ~$40 in mid 2014 when the company's situation was normal and trouble-free, to under $4 in Jan 2016.

The figures below show the yields over time for three VRX bonds with various maturity dates. 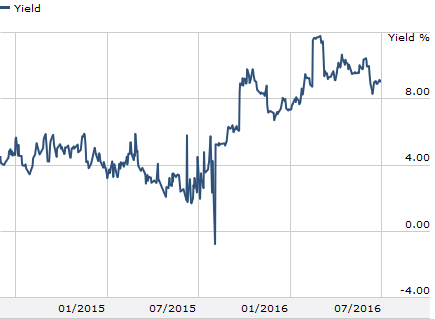 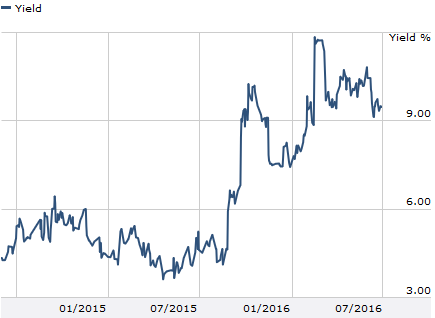 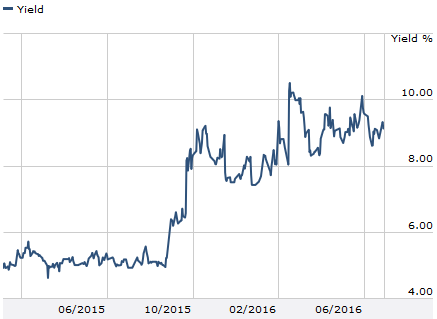 The first and most striking thing to note is that in all cases, the yields never went beyond the distressed threshold of 11-12%, despite VRX's stock selling off 90% like FCX's did. The bond market simply didn't believe what the stock market was trying to say about Valeant's situation, and still doesn't.

The figures also show that VRX's bond yields are now back to the levels they were at before the disastrous earnings call in March. In contrast, the stock has sold off by almost 70% since then. The bonds are saying Valeant's situation (regarding the possibility of bankruptcy) is the same as it was back then, while the stock market is saying that it is 70% worse. The disbelief that the bond market is expressing to what the stock market has been saying is striking and noteworthy.

Currently, with yields around 9% and prices in the mid 80 to low 90 cents to the dollar, Valeant's bonds are clearly not distressed. However, they are not particularly cheerful either. The bond market is expressing concern about Valeant's situation, but to a much lesser degree than the stock market.

So far, I have shown qualitatively that the bond market has a very different, much less negative view of Valeant than the stock market. In the following, I will turn this into a quantitative statement by figuring out the probabilities that the bond and stock markets are currently assigning for Valeant to go bankrupt.

The outcome for Valeant in its present situation appears to be binary: either it stabilizes, recovers and returns to the same growth as peers in the next few years, or else goes into a slow death spiral if there is further major deterioration in the business. Therefore, as a rough estimate of the bankruptcy probability assigned by the bond market, we can use the 10-year default rate for bonds with Valeant's rating.

Valeant's bonds currently have a rating of B3 (Moody's)/B- (S&P). According to page 11 of this S&P document, the 10-year default rate for corporate bonds with this rating is 27.33%. I will take this as the bond market's probability for Valeant going bankrupt in future.

The next goal is to figure out the bankruptcy probability that the stock market is assigning to Valeant. For this, we first need to figure out the share price at which VRX should be trading in normal circumstances. i.e. do a valuation based on comparison to peers. I will use EV/revenue for this comparison. (EV = enterprise value.) First, a few comments on why this metric is a good one to use in this situation, and something one needs to be careful about when using it.

While EV/EBITDA is a more commonly used valuation metric, EV/revenue is better if one wants to be conservative since it "outs" companies that are boosting their EBITDA in artificial or unsustainable ways compared to peers. There is a drawback though, namely that EV/revenue has no knowledge of profit margins. Therefore, it should only be used when comparing companies with very similar businesses whose margins should be the same.

The latter aspect greatly restricts the number of companies that Valeant can be compared to on this metric. For example, it makes no sense to compare with generic drug companies (PRGO, MYL, TEVA...) since their margins are much lower. It would also be dubious to compare with 'bloated' big pharma companies (JNJ, PFE, NVS...). In fact, there are only two appropriate companies I can think of for this comparison, namely, Allergan (NYSE:AGN) for the drug side of the business, and the contact lens company Cooper (NYSE:COO) for the lens/consumer products side (since the margins for Valeant's consumer products are similar to their lens business). So I will use AGN and COO for the comparison in the following.

In determining the EV/revenue multiple, I will use 2017 estimated revenues. This is appropriate since, if Valeant stabilizes and recovers, it should return to the same growth as peers from 2018 onwards. Also, I will deduct from Valeant's current EV the 1.7B they intend to pay down on their debt this year. And I will deduct 36B from Allergan's EV, since that is the amount they will receive after taxes from selling their generics business to Teva (TEVA) this year.

The multiples for AGN and COO indicate that VRX's multiple should be at least 5x in normal circumstances. To reach this multiple, the EV (and hence market cap) of VRX would need to increase by 15.7B. This would put the market cap at 23.5B, corresponding to a share price of $69.

Thus, the stock market is assigning more than twice as high probability of bankruptcy than the bond market: 67% vs. 27%.

Having seen both qualitatively and quantitatively that the stock market is much more negative on Valeant than the bond market, the obvious question is: why? Here are some possible reasons:

(1) VRX is basically uninvestible at present for a large segment of the stock market, namely, mutual funds, pension funds, college endowment funds and the like. For e.g. mutual fund managers know that their investors will not be comfortable having their retirement savings in such a risky stock, especially with the continuous barrage of negativity towards it from the media. (This is the likely reason why the new managers of the Sequoia fund decided to completely exit VRX recently.) Mutual funds that invest in VRX risk redemptions, especially if the share price goes lower from here.

(2) Hedge funds may decide that it is in their interest that VRX goes lower, and may band together to further that goal. This will allow them to buy at a cheaper price if and when VRX stabilizes and recovers; or if it doesn't, then they can keep making money shorting it to zero.

(3) The large daily trading volume in VRX in recent months (~30M shares, compared to less than 10M in the past) indicates that a substantial fraction of VRX stock is in the hands of traders and speculators. These "investors" are easily flushed out of their positions when the stock continues to sell off, and this sets up a cascade of selling as the wave of speculators who bought at one price level (in the hope of catching the bottom) sell to a new wave coming in below them, who later sell to the next wave, and so on. It probably wouldn't take much shorting from the hedge funds to set this chain reaction off and keep it going. (Indeed, the fraction of shares sold short is quite small, ~8%.)

VRX may therefore be an attractive opportunity at present for long-term investors with a high risk tolerance. More cautious investors may prefer to wait for evidence of stabilization in Valeant's business first, although that will likely mean missing a large part of the up move in the stock if it comes.

Random Itinerant
332 Followers
Mathematician/theoretical physicist by training and profession, currently taking a break from that to develop other interests including financial markets. Itinerant too, have never lived more than 6 years consecutively in any one country. (Currently in Asia.) DIY retail investor.

Disclosure: I am/we are long VRX. I wrote this article myself, and it expresses my own opinions. I am not receiving compensation for it (other than from Seeking Alpha). I have no business relationship with any company whose stock is mentioned in this article.

Additional disclosure: I have no position in any of the other stocks mentioned, and no plan to initiate one.